Snapshots in time: Using fire and logging to recreate a century of forest history at the U-M Biological Station 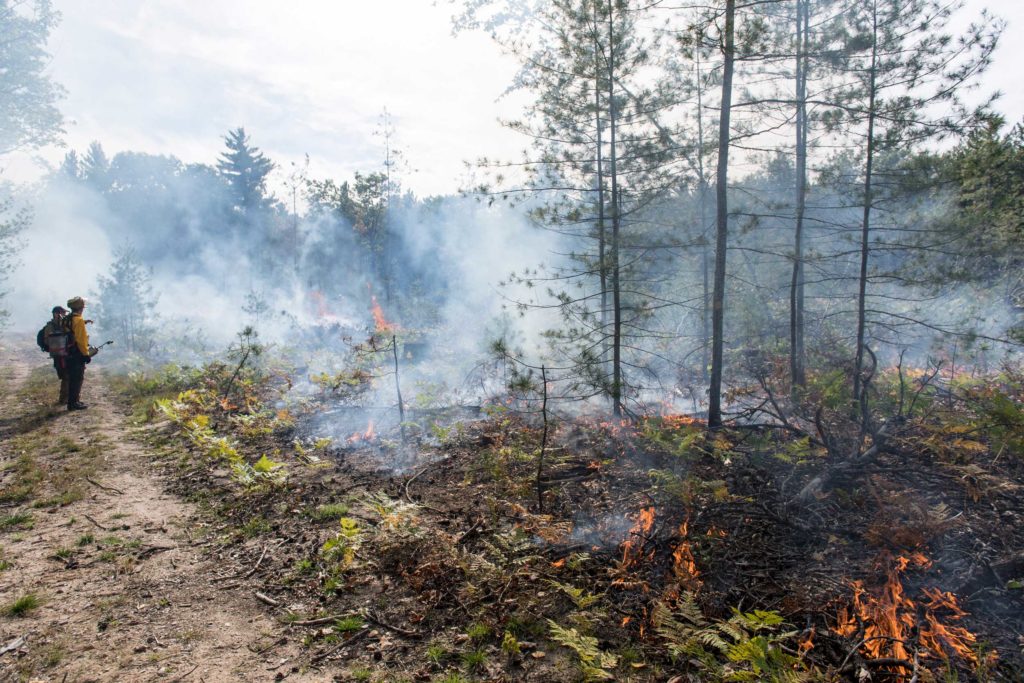 Most trees larger than 5 inches in diameter were removed from the plots in April. Dead branches and other logging debris were left on the ground. Then the plots were burned in October. Image credit: Roger Hart, Michigan Photography

Pellston, Mich.—As flames leap from piles of dead pine branches and dense grey smoke billows into cloudless skies over the University of Michigan Biological Station, you can almost imagine what it was like here a century ago, after the land was stripped of its timber and a series of wildfires swept through, leaving behind a charred, denuded moonscape.

It’s an unseasonably warm fall day with pre-peak foliage of green and gold encircling this 2.5-acre forest plot, where all the trees larger than 5 inches in diameter were cut and removed several months earlier. The fire crew ignites piled logging debris with drip torches containing a mix of diesel fuel and gasoline as transfixed U-M researchers look on.

The researchers and firefighters are here to establish the sixth “burn plot” in a long-running experiment that seeks to approximate, on a tiny scale, the epic lumbering and wildfire disturbances that transformed the forest here—at the northern tip of Michigan’s Lower Peninsula—and throughout the Upper Great Lakes region.

“These burn plots are a time machine that allows us to look back at forests of different ages. They are a deliberately manipulated set of forests that have been, and will continue to be, a tremendous teaching and research resource,” said Biological Station Director Knute Nadelhoffer, one of the eager onlookers at the October 10 burn.

Starting in 1936 and repeated every 10 to 20 years, Biological Station researchers have logged and burned small, contiguous plots to study how forests recover from these two types of disturbances. The first plot was established in aspen forest by plant ecologist Frank Gates in 1936. Others were added in 1948, 1954, 1980 and 1998—and now 2017.

The burn plots provide a series of snapshots of different-aged forests and contain a changing mix of tree species and other plants. Except for these small plots and a few pockets of old-growth trees, most of the forest at the 10,000-acre Biological Station dates to 1911, the last time the property was severely burned by post-logging wildfires.

The U-M Biological Station burn plots, which are formally known as a forest chronosequence, form one of the longest-running and most exhaustively studied experiments of its kind in the United States. The plots have yielded wide-ranging ecological insights and have provided the raw material for more than 100 undergraduate papers, master’s theses, doctoral dissertations, and articles in peer-reviewed scientific journals.

The nature of the burn-plot studies has changed over the decades as increasingly sophisticated tools enable scientists to address new questions. Currently, one overarching research theme is the amount of carbon stored in forest plants and soils and how that is likely to change as the world continues to warm.

One U-M student using data from the latest burn is Buck Castillo, who is studying how forest disturbances affect fungal communities in the soil. The burn findings will form a chapter in his doctoral dissertation at the U-M Department of Ecology and Evolutionary Biology.

“One of the big concepts in ecology is forest succession, which is the study of how communities change over time in forests,” Castillo said while standing in the latest burn plot a few hours before ignition. Cleared of large trees in April, the site is surrounded by a forest of aspen, white pine, red oak, birch, red maple, sugar maple, beech and red pine. The ground in the cleared plot is covered with piles of dead branches, stumps, scrawny pine saplings, bright green bracken ferns and scattered bushes: blueberry, huckleberry, wintergreen.

“We can get Biological Station students out here in these plots and in one hour walk them through 100 years of forest succession,” Castillo said. “It’s an aha moment for these students because they can see exactly what you’re talking about.

“The teaching tools available in that one-hour walk are endless and very hard to find anywhere else in the world.” 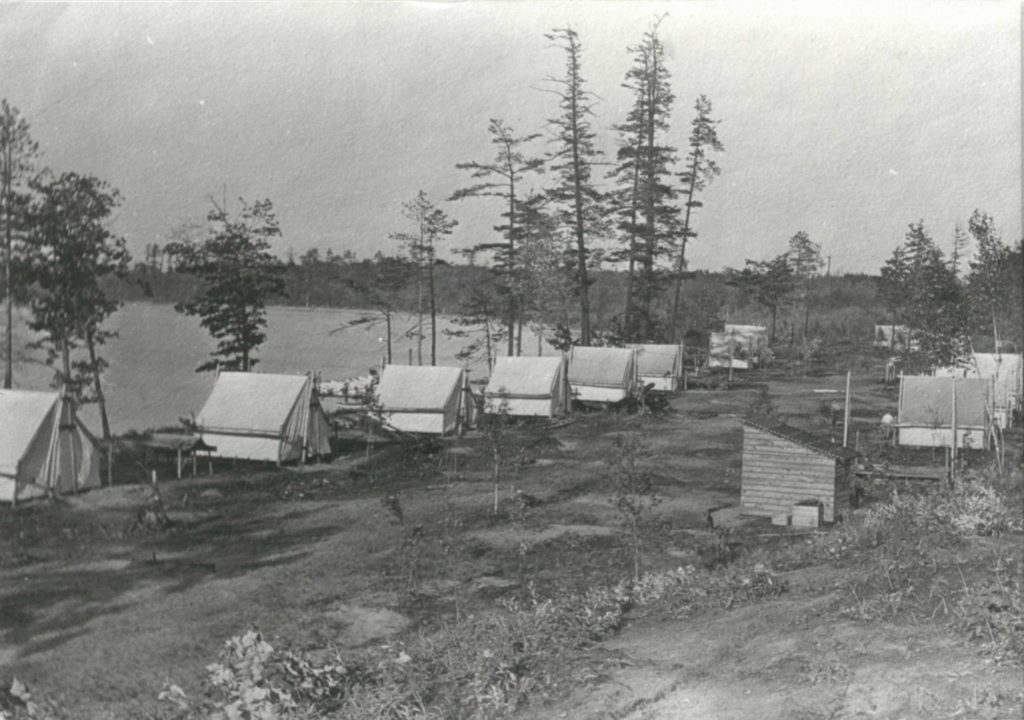 Residential tents at the University of Michigan Biological Station near Pellston, circa 1914, following a period of heavy logging and frequent wildfires. Ten women and four men were in the inaugural class of students in 1909. Image credit: U-M Bentley Historical Library

The first group of intrepid students and faculty to trek to the U-M field station when it was established in 1909 could never have imagined the high-tech resources that would be available to future generations of visitors at the outpost near Pellston.

The Biological Station was founded on land acquired from lumber barons after nearly all of the marketable and accessible trees had been cleared. Initially, the site on the shores of Douglas Lake was used as a civil engineering camp because the wide-open space was an ideal place to teach surveying.

Fourteen students—four men and 10 women—were enrolled in the inaugural class of 1909, according to “The Changing Environment of Northern Michigan,” a 2010 book from the University of Michigan Press about the Biological Station’s first century. Try to imagine what it was like for those first groups, pitching tents on sandy, charcoal-blackened soil in a blasted landscape.

The first commercial logging in Cheboygan County (the U-M station straddles Cheboygan and Emmet counties) began in 1844 and focused on white pine, red pine and hemlock. Most conifers were gone by 1900, and attention shifted to high-quality hardwoods.

Lumbering reached its peak in Cheboygan County in 1896, when a mind-boggling 200 million board-feet of timber was cut, according to the late Burton V. Barnes, a longtime U-M forest ecologist who wrote about the station’s vegetation history for the centennial book. That’s equivalent to 12.5 million planks that are each 16 feet long, 12 inches wide and 1 inch thick.

Much of the wood from the region was hauled south to build cities—including Chicago, which burned in 1871—and barns in the Midwest.

After the timber barons left Northern Michigan, wildfires swept through the region and devoured the slash, the woody debris left behind after logging operations. Between 1890 and 1923, 11 wildfires were recorded in Cheboygan County, according to Barnes. The fires were started by lightning strikes, by embers thrown into the air from locomotives, and by settlers who used intentionally set fires to clear land for farming, said U-M ecologist and biogeochemist Luke Nave.

In 1936, plant ecologist Frank Gates of Kansas State University, who taught biology and botany at the U-M station in the summer, hatched a plan to recreate—on a very small scale—the twin disturbances that transformed the landscape. Gates later served as president of the Ecological Society of America.

“When that first experimental burn occurred, it was done out of curiosity,” said Nadelhoffer, a professor in the Department of Ecology and Evolutionary Biology. “Frank Gates was a botanist as well as an ecologist, and he wanted to know what kinds of trees come in immediately after major disturbances, so he decided to start an experiment.”

Trees were harvested from a 2.5-acre plot, which was then deliberately burned, and the UMBS Burn Plots were born. The same treatment has been repeated every 10 to 20 years on contiguous plots, most recently on Oct. 10, 2017. Due to sub-optimal weather conditions, the 2017 prescribed fire did not burn as intensely as fires in previous years, so U-M researchers are considering re-burning the plots next spring.

Today, Biological Station students can go to the fencepost marking a corner of the 1936 burn and see how the forest has changed since then.

And technological advances allow the current generation of researchers and their students to pose questions that simply weren’t possible to address when the previous burn plots were established.

For example, recent advances in genomics allow Castillo to quickly sequence the DNA of bacteria and fungi living in the soil. And he uses the latest enzyme extraction techniques to see how those organisms process carbon.

During the Oct. 10 burn, U-M graduate students and colleagues from Aerodyne Research were cruising nearby roads in a mobile laboratory, using a single-particle mass spectrometer and other high-tech instruments to measure the chemical composition of smoke particles 100 times smaller than the diameter of a human hair. Funding for Aerodyne’s participation was provided by the National Oceanic and Atmospheric Administration.

“Prescribed burns offer an opportunity to study the details of wildfire smoke emissions in a controlled setting where the fuel and burn conditions are known,” said Kerri Pratt, an assistant professor in the U-M Department of Chemistry. Two of Pratt’s doctoral students, Nathaniel May and Nicholas Ellsworth, were in the mobile lab on burn day. 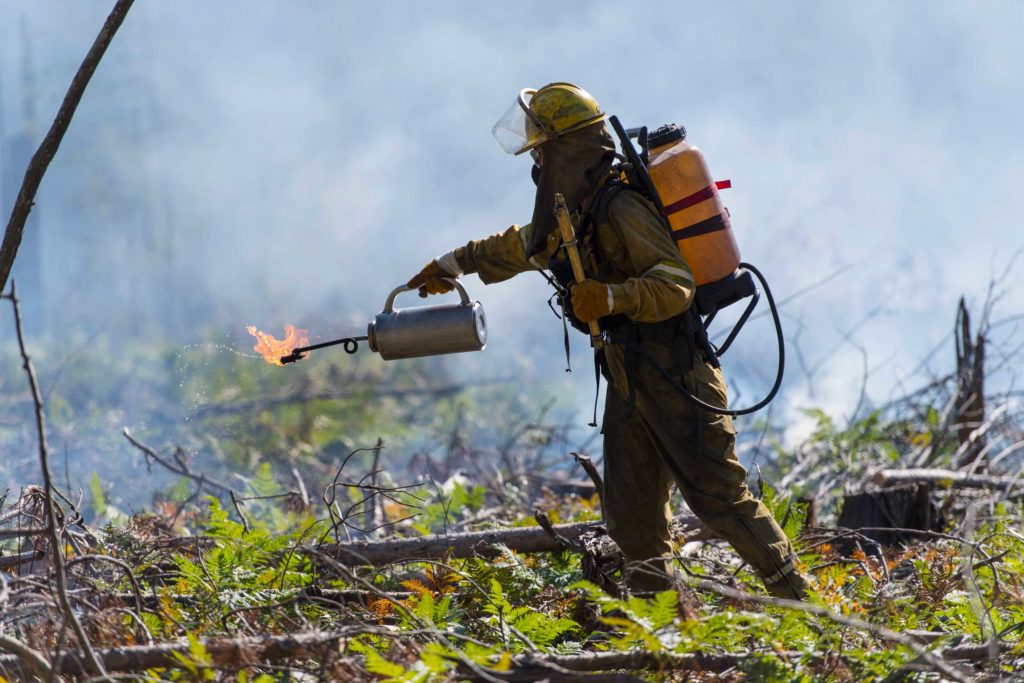 The fire crew used drip torches containing a mix of diesel fuel and gasoline to ignite dead branches and ground cover. The newly added burn plot is the sixth in a long-running experiment that began in 1936. Image credit: Roger Hart, Michigan Photography

The UMBS burn plots also allow researchers to address critical questions about climate change and the long-term storage of carbon in forests and their soils, said Nave, who studies that topic and who was at the station for the October burn.

The world’s forests remove about one-quarter of the heat-trapping carbon dioxide emitted into the atmosphere annually through the burning of fossil fuels, Nadelhoffer said. At the U-M Biological Station, the forest removes about a ton of carbon per acre from the atmosphere each year, storing it as newly grown wood and soil organic matter, Nave said.

“This forest removes the carbon equivalent of one to two cords of oak firewood per acre each year,” said Nave, an assistant research scientist at the U-M Biological Station and in the Department of Ecology and Evolutionary Biology. “That’s one of the many valuable services that these forests provide.”

How will the amount of carbon stored in the world’s forests and forest soils—a carbon “sink” that acts as a natural buffer against human-caused climate warming—change as the world continues to warm? And if wildfires continue to grow in size and frequency, how will carbon storage be affected?

Nadelhoffer, Nave and other researchers are using the burn plots to help answer some of those questions, in a project funded by the National Science Foundation. They are using data from the plots and from several old-growth stands on Biological Station property to determine the factors that control carbon sequestration as forests develop.

“We’ll use this latest addition to the burn plots to get a closer look at how initial forest responses to disturbance set their longer-term trajectories of carbon accumulation,” Nave said while standing next to smoldering vegetation on the newly added burn plot.

Nave and other U-M researchers said the Oct. 10 burn successfully added a new plot to the forest chronosequence. However, this year’s fire did not burn as intensely as those in previous years, based on a comparison with old photos. Occasionally, flames lengths during the October 2017 burn reached 5 or 6 feet in piles of dead pine boughs, but they were generally much smaller than that.

In addition to the 2.5-acre plot that was added to the chronosequence, two other plots were burned in red pine, bringing the total area burned that day to a bit more than 6 acres. Biological Station researchers are looking into the possibility of re-burning some or all of the plots next spring when the fuels are well-dried, said Jason Tallant, the station’s information manager and the logistics coordinator for the burn-plot project.

Post-fire tests are now being conducted to determine the burn’s impact on soil microbes and to measure carbon and nitrogen loss.

Total cost for the project, including both the April logging and October’s prescribed burn, was about $15,000. Internal Biological Station funds paid for the project. The logging was done by Tom Knopf of Cheboygan, and the prescribed fire was carried out by PlantWise of Ann Arbor.

The U-M Biological Station was recognized by UNESCO as an international biosphere reserve in 1979.