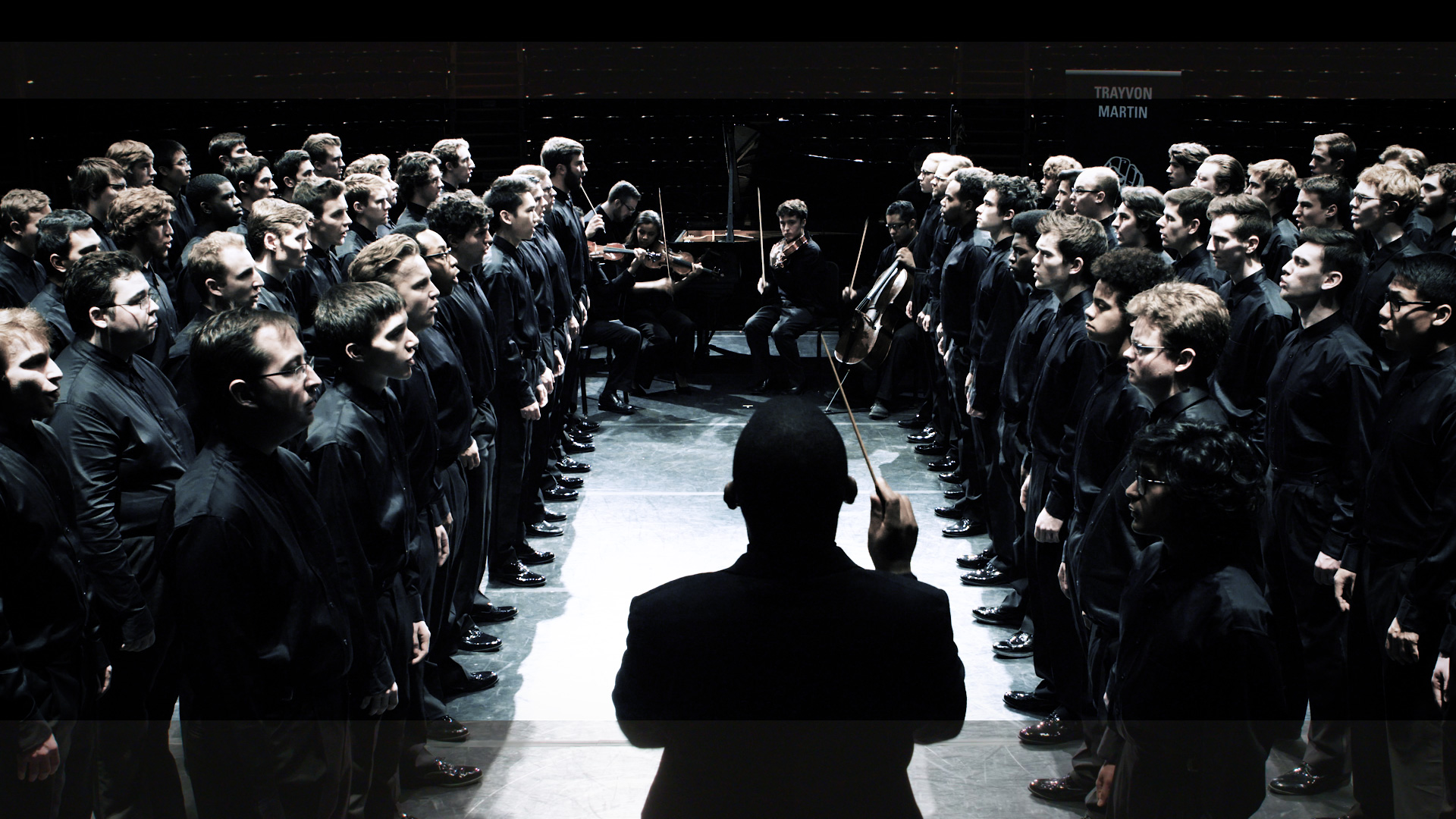 These men are the subjects of a powerful multi-movement work by up-and-coming Atlanta-based composer Joel Thompson titled “Seven Last Words of the Unarmed.”

Known for selecting songs that promote musical “ubuntu”—a peace concept widely popularized by late South African president Nelson Mandela—Rogers says that “Seven Last Words” challenged students to allow themselves to see the world through the eyes of others.

“Great art should do more than entertain—great art should provoke thought and critical discourse, engage the audience, and build a safe, strong sense of community through the exploration of important issues,” Rogers said. “This is why I choose to include repertoire in my programming that focuses on themes surrounding social justice.”

Thompson, who met Rogers while workshopping his composition in 2015, was initially inspired by Iranian-American artist Shirin Barghi’s #lastwords project. From more than a dozen of Barghi’s illustrations containing the dying words of unarmed black men shot and killed by authority figures, Thompson chose seven statements that aligned most closely with the classical structure of Joseph Haydn’s “Seven Last Words of Christ on the Cross.”

“I wanted to process my personal feelings about being a young black man in this very racially tense time we’re living in,” Thompson said. “I also wanted to figure out a universal way to remember these men who had lost their lives too soon.”

Each movement is distinctly different, borrowing influences from musical theater, Bach, Brahms, and even aleatoric music—a style of music where an element of the composition is left to the spontaneity of the performers, which can be heard as students repeat Oscar Grant’s last words “You shot me! You shot me!” in Movement V.

The group has performed the piece, paired with Rogers’ arrangement of “Glory” from the film “Selma,” several times as part of this year’s roster of songs that convey themes of “love, life, and loss,” and “hope in the midst of struggle.”

As part of his teaching process, Rogers had his students—who represent various ages, races, religions, cultures and socioeconomic backgrounds—write essays about their reactions to the piece.

The responses were varied. For African-American students, the experience presented a personal struggle. Other students expressed feelings of guilt, hesitation or fear of the polarization of the subject matter.

“The deaths of Trayvon Martin and Michael Brown had a great impact on me and how I view my own mortality,” wrote Wesley Fields, U-M SMTD student. “I was unsure if I could handle the emotional weight of conveying such a powerful message that was very much tied to my own racial identity. I spent many early rehearsals holding back tears and blocking myself off from the piece. Consequently, I was too afraid to audition to be a soloist in the third movement.”

Ryan Carrell, a U-M engineering student, reflected on how performing the work made him rethink the controversial news reports.

“Every time I heard ‘Mom, I’m going to college,’ I felt a pang of guilt,” he wrote. “I had fallen prey to a common byproduct of media coverage. I had based my personal judgments on a single instance in the lives of these men. Like many others, I had come to conclusions from sound bites and 140-character tweets. These seven quotes, free from commentary and forensic file re-enactments, offered a new story. There was human life in this story. I chose to embrace the work as a remembrance of lost possibilities.”

“I think that these songs made us all realize that this is not just a black issue or a white issue,” said Daniel Passino, U-M SMTD student, lead “Glory” soloist and a contestant on NBC’s reality singing show The Voice. “We all agree that every human life is valuable.”

“I am really proud of the way that our students opened themselves up to this experience,” Rogers said. “I was very conflicted about presenting this piece to them because I did not want it to be misinterpreted purely as a political statement. In the end, we practiced ‘ubuntu’—we listened to each other, and we grew together through song.”

The U-M Men’s Glee Club is currently preparing for its first tour of South Africa in the group’s 156-year history, where they will perform these songs for audiences in Potechefstroom, Johannesburg and Pretoria.

Before their departure, they will premiere a 30-minute Michigan Media film about the song titled “Love, Life & Loss.” The screening takes place at 7:30 p.m. April 27 in Angell Hall’s Auditorium A, and will be followed by a Q&A with Dr. Eugene Rogers, SMTD Dean Aaron Dworkin and members of the U-M Men’s Glee Club. The screening is free and open to the public.

“Seven Last Words of the Unarmed” and “Glory” will be available on iTunes, CD Baby, Spotify, Apple Music and all other streaming outlets on April 22.