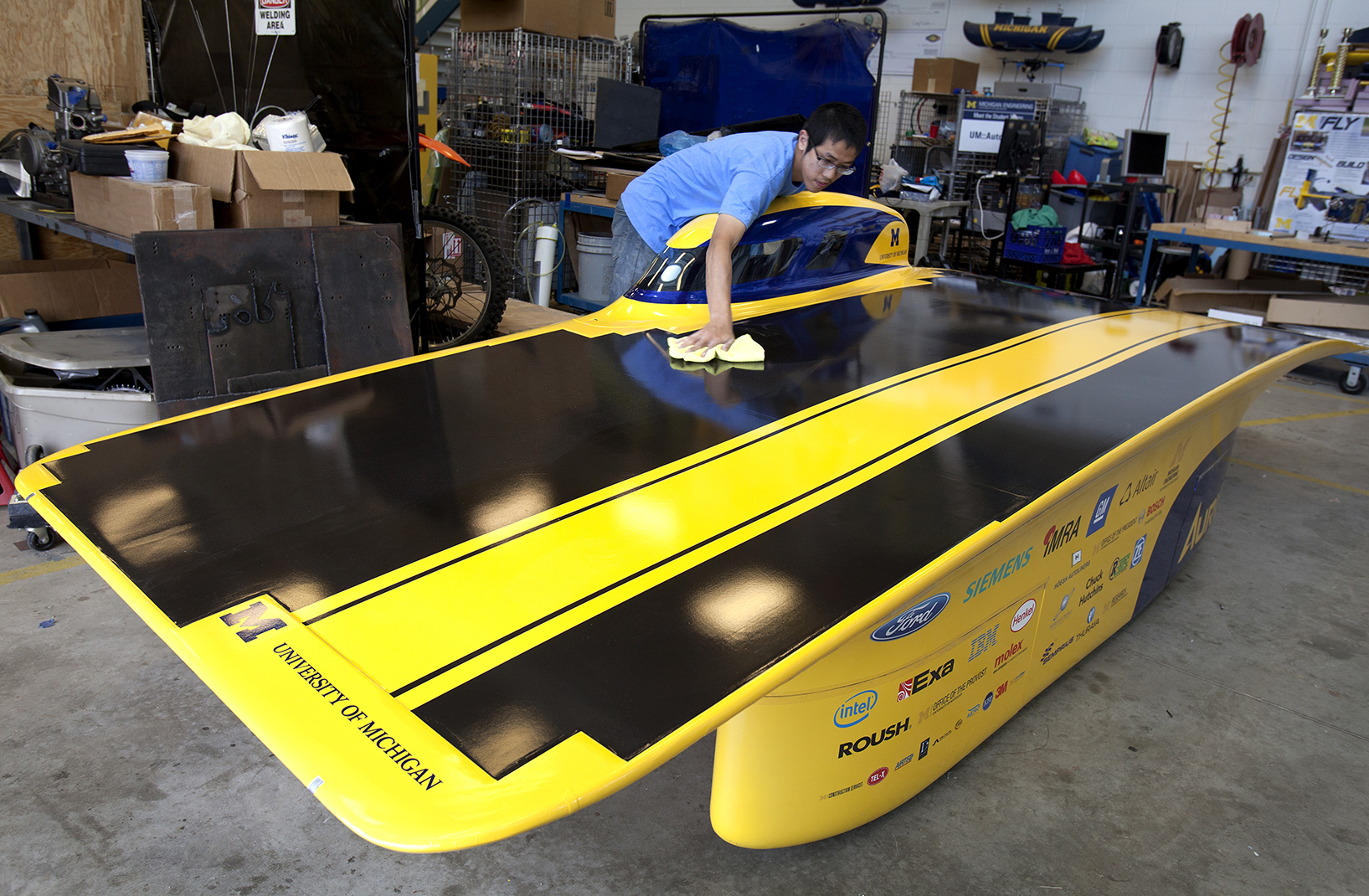 Jiahong Min wipes off dust from the new solar car. He is among the University of Michigan Solar Car team members putting final touches on the car. Image credit: Marcin Szczepanski, Michigan EngineeringANN ARBOR—With a car that seats the driver so far to the right they had to design an elbow bulge into the chassis, the nation’s top-ranked solar car team today unveiled the vehicle it will race across Australia in the Bridgestone World Solar Challenge.

The University of Michigan Solar Car Team’s sleek 2015 model is called “Aurum” – the Latin word for gold. In October, the team will take it 1,800 miles across the Outback in an eight-day endurance contest that takes place every two years. U-M’s team has finished third in the world race three times in its 25-year history. And it has won the comparable American race eight times.

To build this latest vehicle, the students took inspiration not just from a quarter-century’s worth of U-M cars – but also from the rest of the field.

“For the last race in 2013, the team built a good, safe, reliable car. This year, our emphasis is on the competition,” said Edina Lee, the team’s business lead and a sophomore studying electrical engineering. “We pushed really hard for a car that we think will be the fastest. For every element, we worked on not just improving what we had before, but making it better than anything out there.”

While the style of the car is similar to 2013’s – a four-wheeled catamaran with an offset driver – the students improved most of its features. They optimized the mechanical systems, including the suspension, steering and brakes. For their six-meter solar array, they acquired what they believe are the best cells on the market for their purpose, and they worked with the supplier to develop a unique coating that makes them even more efficient.

The students also focused on aerodynamics. In collaboration with the engineering firm Exa, a sponsor, they simulated more than 100 different geometries to find the most streamlined shape and placement of the driver. They settled on something unorthodox.

“It’s a funky shape by the driver,” said Pavan Naik, team leader and a junior at U-M studying industrial and operations engineering. “Drivers will actually be able to see the outer edge of the car when they look out the front windshield.”

For the last race, officials changed the number of wheels that entries required from three to four, forcing competing teams to rethink their vehicles. In a three-wheeled model, the driver can nestle in front of the centered rear wheel without creating much extra drag. With a more conventional drive train, that’s not the case.

The students also switched the steering wheel from the left side to the right in order to hug the interior of the road.

At around 550 pounds with the driver, Aurum is lighter than its most recent predecessor, and only about a third as heavy as a Smart Car. Not only is the body made of carbon fiber, the roll cage is too, making the safety feature much smaller and lighter than it has been in past cars.

Now that the vehicle is ready, the students will focus on themselves.

“There are two facets to a race – the car and the team,” Naik said. “For the car, once you’re done designing and building it, you can make small improvements, but for the most part, that’s it. Now it’s time to get the team ready.”