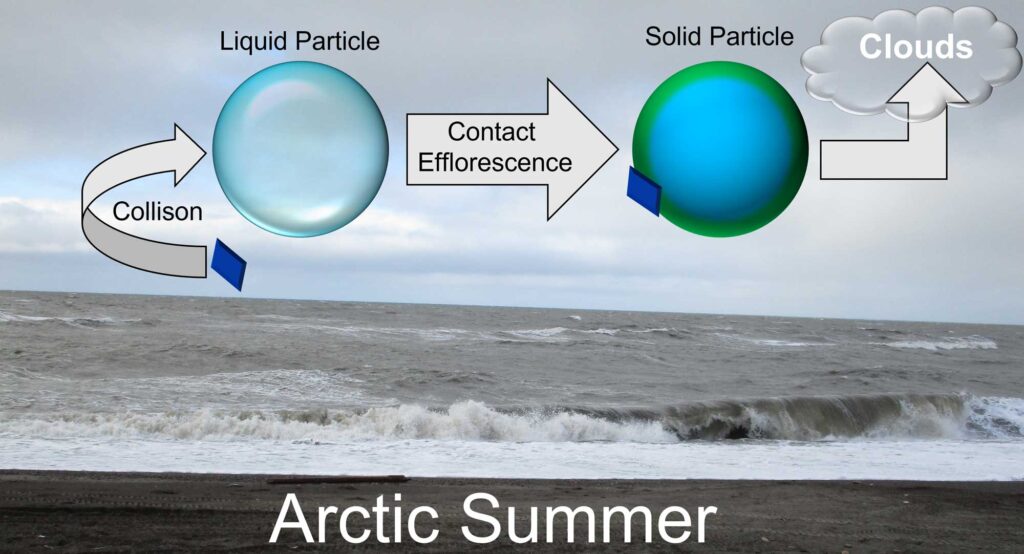 As the Arctic loses ice, researchers expect to see more of these unique particles formed from oceanic emissions combined with ammonia from birds, which will impact cloud formation and climate. Image courtesy: Andrew Ault and Matt Gunsch

So when researchers from the lab of University of Michigan aerosol scientist Kerri Pratt collected aerosols from the Arctic atmosphere during summer 2015, Rachel Kirpes, then a doctoral student, discovered a curious thing: Aerosolized ammonium sulfate particles didn’t look like typical liquid aerosols.

Working with fellow aerosol scientist Andrew Ault, Kirpes discovered that ammonium sulfate particles, which should have been liquid, were actually solid. The team’s results are published in the Proceedings of the National Academy of Sciences.

Solid aerosols can change how clouds form in the Arctic. And, as the Arctic loses ice, researchers expect to see more of these unique particles formed from oceanic emissions combined with ammonia from birds, which will impact cloud formation and climate. Additionally, understanding the characteristics of aerosols in the atmosphere is critical for improving the ability of climate models to predict current and future climate in the Arctic and beyond.

“The Arctic is warming faster than anywhere else in the world. As we have more emissions from open water in the atmosphere, these types of particles could become more important,” said Pratt, associate professor of chemistry, and earth and environmental sciences. “These types of observations are so critical because we have so few observations to even evaluate the accuracy of models of the Arctic atmosphere.

“With so few observations, sometimes you get surprises like this when you make measurements. These particles didn’t look like anything we had ever seen in the literature, in the Arctic, or anywhere else in the world.” 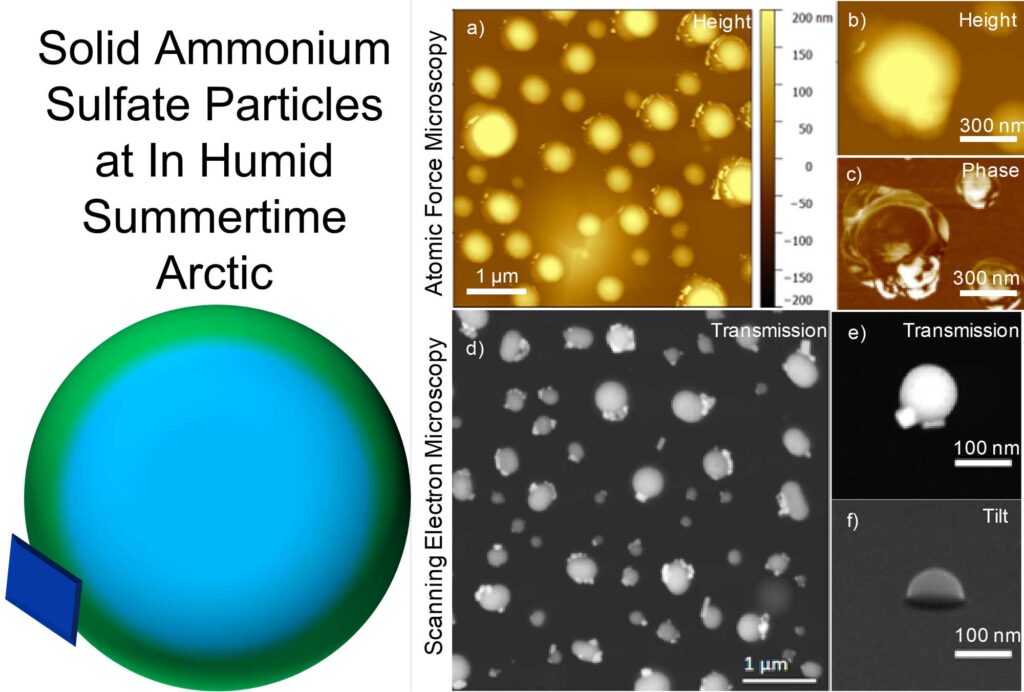 The aerosols observed in the study were up to 400 nanometers, or about 300 times smaller than the diameter of a human hair. Ault, associate professor of chemistry, says that aerosols in the Arctic are typically assumed to be liquid.

Once the relative humidity of the atmosphere reaches 80%—about the level of a humid day—the particle becomes liquid. When you dry the aerosol back out, it doesn’t turn into a solid until the relative humidity is about 35%-40%. Because the air over the Arctic Ocean—or any ocean—is humid, researchers expect to see liquid aerosols.

“But what we saw is a pretty new phenomenon where a small particle collides with our droplets when it’s below 80% humidity, but above 40% humidity. Essentially, this provides a surface for the aerosol to solidify and become a solid at a higher relative humidity than you would have expected,” Ault said.

“These particles were much more like a marble than a droplet. That’s really important, particularly in a region where there haven’t been a lot of measurements because those particles can eventually end up acting as the seeds of clouds or having reactions happen on them.”

“It’s our job to keep helping modelers refine their models,” Ault said. “It’s not that the models are wrong, but they always need more new information as events on the ground change, and what we saw was something completely unexpected.”

Pratt’s team collected aerosols in August-September 2015 in Utqiaġvik, the northernmost point of Alaska. To do this, they used what’s called a multistage impactor, a device that has several stages that collect particles according to their size. Kirpes later analyzed these particles in Ault’s lab using microscopy and spectroscopy techniques that can examine the composition and phase of particles less than 100 nanometers in size.

“If we were to go back several decades when there was ice near the shore, even in August and September, we would not be observing these particles. We’re observing the consequences of this climate already changing,” Pratt said. “We need to have the reality captured in models that simulate clouds and the atmosphere, which are critical for understanding the energy budget of the Arctic atmosphere, for this place that is changing faster than anywhere else.”