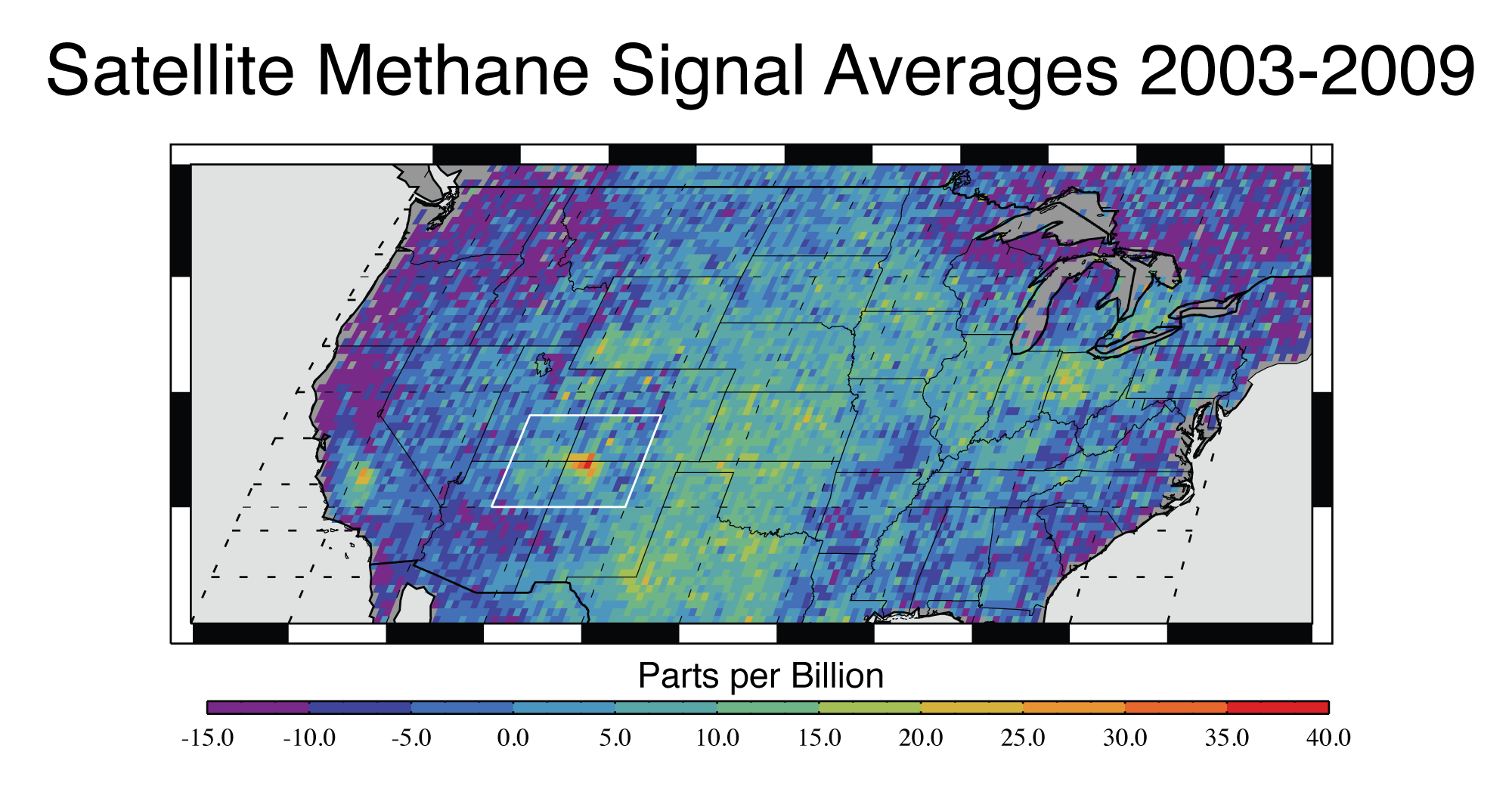 This map shows anomalous U.S. methane emissions (that is, how much the emissions are higher or lower than average) for 2003-2009, as measured by SCIAMACHY. Purple and dark blue areas are below average. Pale blue and green areas are close to normal or slightly elevated. Yellows and red indicate higher-than-normal anomalies, with more intense colors showing higher concentrations. The Four Corners area is the only red spot on the map. Image credit: NASA/JPL-Caltech/University of MichiganANN ARBOR—An unexpectedly high amount of the climate-changing gas methane, the main component of natural gas, is escaping from the Four Corners region in the U.S. Southwest, according to a new study by the University of Michigan and NASA.

The researchers mapped satellite data to uncover the nation’s largest methane signal seen from space. They measured levels of the gas emitted from all sources, and found more than half a teragram per year coming from the area where Arizona, New Mexico, Colorado and Utah meet. That’s about as much methane as the entire coal, oil, and gas industries of the United Kingdom give off each year.

Four Corners sits on North America’s most productive coalbed methane basin. Coalbed methane is a variety of the gas that’s stuck to the surface of coal. It is dangerous to miners (not to mention canaries), but in recent decades, it’s been tapped as a resource.

“There’s so much coalbed methane in the Four Corners area, it doesn’t need to be that crazy of a leak rate to produce the emissions that we see. A lot of the infrastructure is likely contributing,” said Eric Kort, assistant professor of atmospheric, oceanic and space sciences at the U-M College of Engineering.

Kort, first author of a paper on the findings published in Geophysical Research Letters, says the controversial natural gas extraction technique of hydraulic fracturing is not the main culprit.

“We see this large signal and it’s persistent since 2003,” Kort said. “That’s a pre- fracking timeframe in this region. While fracking has become a focal point in conversations about methane emissions, it certainly appears from this and other studies that in the U.S., fossil fuel extraction activities across the board likely emit higher than inventory estimates.”

While the signal represents the highest concentration of methane seen from space, the researchers caution that Four Corners isn’t necessarily the highest emitting region.
“One has to be somewhat careful in equating abundances with emissions,” said study contributor Christian Frankenberg at Jet Propulsion Laboratory. “The Four Corners methane source is in a relatively isolated area with little other methane emissions, hence causing a well distinguishable hot-spot in methane abundances. Local or more diffuse emissions in other areas, such as the eastern U.S., may be convoluted with other nearby sources.”
Natural gas is often touted as more sustainable than coal and oil because it releases fewer pollutants when it burns. But when it leaks into the air before it gets to the pilot light, methane has 30 times the short-term heat-trapping effects of carbon dioxide. Policymakers, energy companies and environmentalists alike are aiming to reduce methane emissions as a way to curb climate change. But pinpointing plumes—a first step to stopping them—has been a difficult task with today’s tools.

The research team demonstrated a new approach to finding leaks. They used a satellite instrument—the European Space Agency’s SCIAMACHY—to get regional methane measurements over the entire United States. They ran the data through a mathematical model to account for mountains and valleys, which can trap methane. That’s how they identified the anomaly at Four Corners. Then they zoomed in on that region and ran another mathematical model to control for wind, to make sure that didn’t negate the original signal. It didn’t.

“We didn’t know this was a region we should look at. We found it from space,” Kort said. “We’ve demonstrated that satellite measurements can help identify, locate and quantify anomalous methane emissions in regions that are unexpected.”

Methane gets into the atmosphere from both natural and human-made sources. Wetlands and landfills release it, as do certain bacteria. Agriculture is a big contributor. So are gas and oil drilling and distribution. Inventories such as those the EPA compiles make estimates based on measurements from a sampling of these sources. In previous work, air measurements from planes and a sparse network of monitoring towers have revealed that the inventory-based numbers are coming in low—roughly 50 percent low. But towers and planes can’t see everywhere to figure out exactly where all the methane is coming from. With limited observations there can be blind spots, the researchers say.

This study used satellite data from 2003 to 2009. In later years, they were able to validate the satellite measurements with a year of ground-based data.

SCIAMACHY is no longer operating, so there aren’t equivalent satellites to provide this information for other parts of the world. For the Four Corners region, Kort will be taking readings from an airplane next year, to get even closer to identifying the leaks.

The study is titled “Four Corners: the largest US methane anomaly viewed from space.” The research was funded by NASA and Los Alamos National Lab.