In a new study in Science Translational Medicine, a team from the University of Michigan reports the results of the first animal tests and clinical trial of the approach, including data from 20 human tinnitus patients.

Based on years of scientific research into the root causes of the condition, the device uses precisely timed sounds and weak electrical pulses that activate touch-sensitive nerves, both aimed at steering damaged nerve cells back to normal activity.

Human participants reported that after four weeks of daily use of the device, the loudness of phantom sounds decreased, and their tinnitus-related quality of life improved. A sham “treatment” using just sounds did not produce such effects.

The U-M team has new NIH funding for an additional clinical trial to further refine the approach. U-M holds a patent on the concept behind the device and is developing it for potential commercialization.

“The brain, and specifically the region of the brainstem called the dorsal cochlear nucleus, is the root of tinnitus,” said Susan Shore, the U-M Medical School professor who leads the research team. “When the main neurons in this region, called fusiform cells, become hyperactive and synchronize with one another, the phantom signal is transmitted into other centers where perception occurs.

“If we can stop these signals, we can stop tinnitus. That is what our approach attempts to do, and we’re encouraged by these initial parallel results in animals and humans.”

A dual-stimulus approach to treating tinnitus

The approach, called targeted bimodal auditory-somatosensory stimulation, involves two senses. The device plays a sound into the ears, alternating it with precisely timed, mild electrical pulses delivered to the cheek or neck.

This sets off a process called stimulus-timing dependent plasticity, or STDP, which was first explored in animals and led to long-term changes in the rate at which the nerves fire. The approach aims to reset the activity of fusiform cells, which normally help our brains receive and process both sounds and sensations such as touch or vibration—what scientists call somatosensory inputs.

Under normal conditions, fusiform cells help our brains focus on where sounds are coming from, and help us tune out sensations that result from the movement of our own head and neck.

But the U-M team’s previous work in animals showed that loud noise can trigger a change in the nerve cells’ activity—altering its timing so that they fire off synchronized signals spontaneously instead of waiting for an actual sound in the environment.

The toll of tinnitus

These events in animals parallel what happens in humans. After exposure to such things as loud noises, head or neck trauma, or other triggering events, some people develop a persistent sensation that they’re hearing sounds like ringing or a grinding noise.

Approximately 15 percent of Americans have some level of tinnitus, but the worst symptoms occur in about 10 percent of sufferers, according to estimates based on interviews with nationally representative samples of Americans. Many of those with more severe tinnitus also have hearing loss.

Some cases are severe. As many as 2 million people can’t work or carry out other daily activities because of the tinnitus itself, or the psychological distress it causes them. Tinnitus is the most common cause of service-connected disability among veterans of the U.S. military.

Current approaches to tinnitus treatment focus include efforts to address the psychological distress it causes, for instance through cognitive behavioral therapy. Other approaches use sound to mask the phantom sounds or attempt to modulate the brain response.

For more severe cases, some patients turn to invasive, and therefore riskier, approaches such as deep brain stimulation and vagal nerve stimulation. The current approach provides a novel and unique, non-invasive strategy that aims to modulate and correct the aberrant neural pathways that cause tinnitus.

Shore and her colleagues are based in U-M’s Kresge Hearing Research Institute, which is part of the Department of Otolaryngology at Michigan Medicine, U-M’s academic medical center. Co-first authors Kendra Marks, David Martel and Calvin Wu are members of the Shore laboratory.

They recruited a particular kind of tinnitus sufferer for their study: those who can temporarily alter their symptoms if they clench their jaws, stick out their tongues, or turn or flex their necks. These maneuvers, Shore says, appear to be self-discovered ways of changing the activity of fusiform cells—providing an external somatosensory signal to modulate their tinnitus.

The U-M device delivers sounds matched to the loudness and pitch of the phantom sounds that each patient hears. It also delivers mild electrical impulses applied to the area of the head involved in the patients’ own tinnitus-altering maneuvers.

The crucial timing of the auditory and electrical stimulation came directly from tests in guinea pigs that had noise-induced tinnitus, reported in the new study. Those tests showed that specific timing between delivery of the two kinds of stimuli was necessary to suppress the hyperactive fusiform cells. 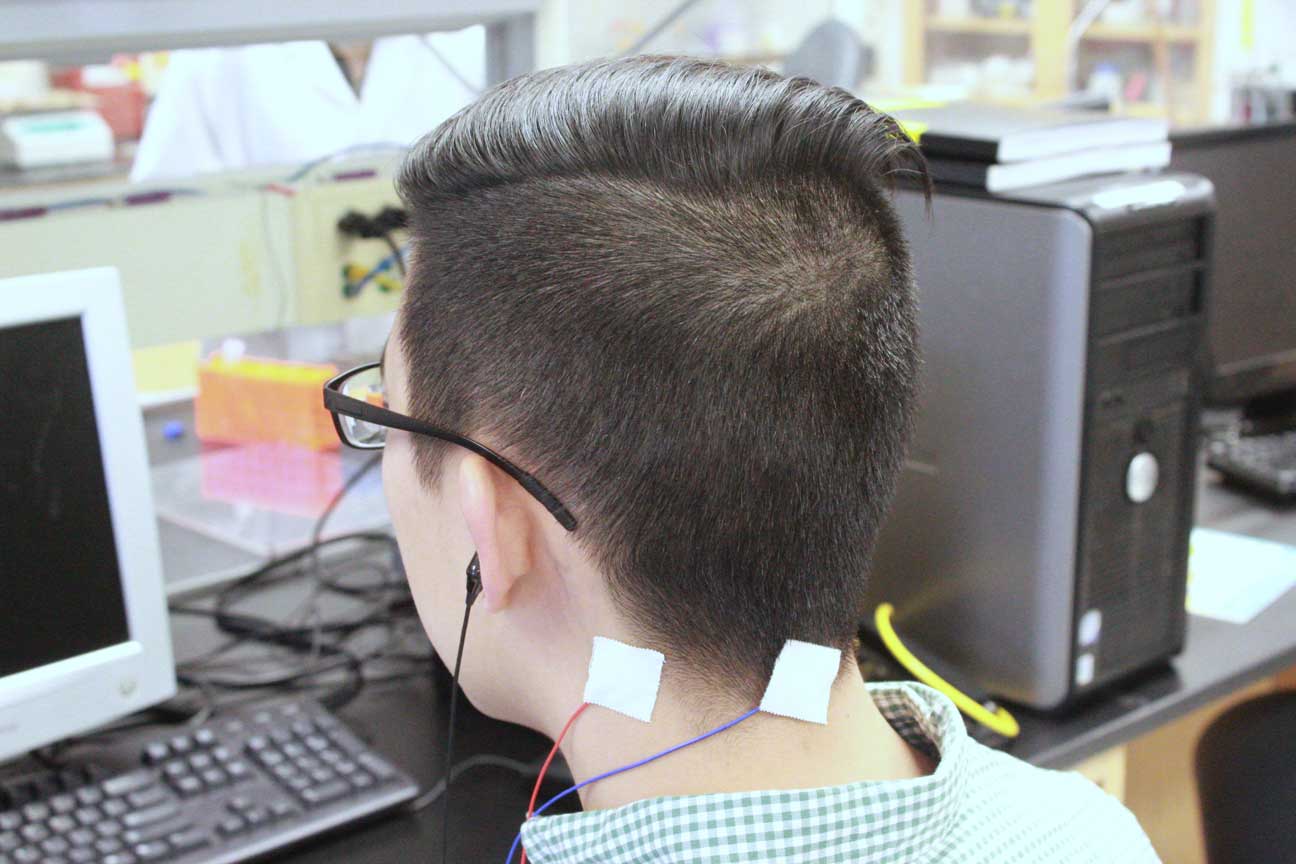 After patients had the device calibrated to their own tinnitus symptoms, they learned to apply its earphones and electrodes for a 30-minute session each day. Half the group received the bimodal sound-and-electricity treatment for the first four weeks, while the other half received just sounds. Then, they all took a four-week break, and started the next four weeks receiving the opposite of what they’d received before. None of them knew which option they got first.

Overall, the loudness of phantom sounds decreased only after the actual, or bimodal, treatment, but not the sham treatment of sound only. For some the decrease was around 12 decibels, about the magnitude of an electric light bulb’s hum. Two participants said their tinnitus disappeared completely.

The quality of life survey—where a low score indicates less impact from tinnitus—is called TFI, and is measured on a 100-point scale. Statistical modeling of the results revealed that, on average, patients experienced significantly reduced scores for the active treatment, though the size of the effect in individual patients varied. On average, scores also stayed lower for weeks after treatment ended. This effect was not significant for the sham treatment.

No patient experienced a worsening of symptoms or quality of life, or other adverse events. Some said their phantom sounds got less harsh or piercing, or became easier to ignore.

“We’re definitely encouraged by these results, but we need to optimize the length of treatments, identify which subgroups of patients may benefit most, and determine if this approach works in patients who have nonsomatic forms of the condition that can’t be modulated by head and neck maneuvers,” Shore said.

The research was funded by NIH grants DC004825 and DC00011, and by the Wallace H. Coulter Translational Research Partnership. The device was built at in2being LLC based on patent 9,242,067 granted to U-M in 2016. The device is experimental and not commercially available; potential cost of treatment has yet to be determined.

More information on the design of the clinical trial is available at myumi.ch/L19Mn. Further funding will come from the NIH BRAIN Initiative, myumi.ch/6n1yz.

Recruitment for the next clinical trial will begin in early 2018, with the trial expected to start in late summer. Information will be posted on www.clinicaltrials.gov six months before the start of the trial, and is also available via tinn.trial@umich.edu.