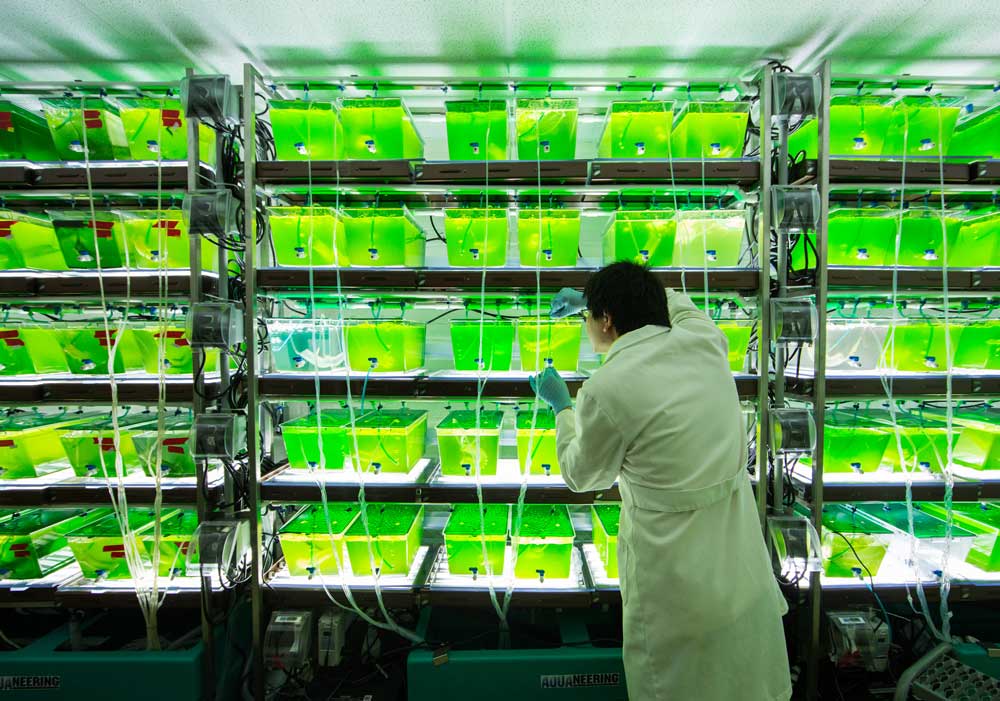 ANN ARBOR—When growing algae in outdoor ponds as a next-generation biofuel, a naturally diverse mix of species will help reduce the chance of crop failure, according to a federally funded study by University of Michigan researchers.

Algae-derived biocrude oil is being studied as a potential renewable-energy alternative to fossil fuels. U-M ecologist Bradley Cardinale and his colleagues found that growing multiple algal species in 180 aquarium-like tanks helped stabilize biocrude production and made the system more reliable and efficient.

While the experiment was conducted indoors, its findings have relevance for outdoor cultivation, said Cardinale, co-author of a paper published online recently in the journal Environmental Science & Technology.

“These findings are important because one of our greatest challenges in making algal biofuel affordable is improving the efficiency of outdoor growth ponds and preventing crashes that ruin crops,” he said.

“Companies spend large amounts of money to repeatedly set up these ponds. If species diversity increases efficiency while also reducing the chance of a crash, then it reduces costs as well,” said Cardinale, a professor at the U-M School of Natural Resources and Environment and director of CILER, the Cooperative Institute for Limnology and Ecosystems Research.

Surprisingly, the researchers also found that growing a mix of algal species did not increase biocrude production compared to species grown alone as monocultures. In fact, competition among species often caused mixtures to produce less biocrude than each species did individually.

This finding contrasts with decades of ecological research showing that communities containing more diverse sets of plants and animals are, on average, more productive and more efficient at using resources. Because of this prior work, the U-M algae researchers had hypothesized that a mix of algal species would be more productive than single species. But that was not the case.

“Our results suggest there is a fundamental tradeoff when growing algal biofuel,” said Anita Narwani, a former U-M postdoctoral researcher in the School of Natural Resources and Environment and lead author of the study.

“You can grow single-species cultures that produce high yields but have a high risk of crop failure. Or you can use mixtures of species that produce lower yields but are much less likely to crash and are more sustainable through time.” 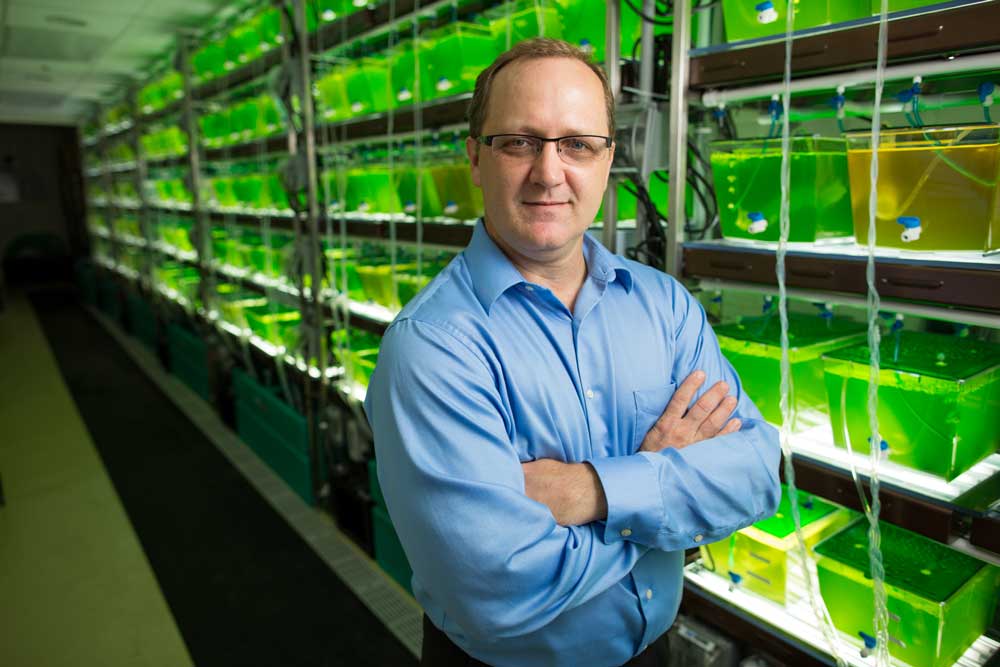 U-M ecologist Bradley Cardinale, leader of a research team that conducted a federally funded study to look for ways to take advantage of biological diversity to create better biofuels from algae. The researchers found that using a naturally diverse mix of algal species helps reduce the chance of crop failure. Photo by Austin Thomason/Michigan Photography.

The U-M work was funded by a $2 million, four-year grant from the National Science Foundation. Awarded in July 2013, the grant paid for a two-part study to identify and test naturally diverse groups of green algae that can be grown together to create a high-yield, environmentally sustainable and cost-effective system to produce next-generation biofuels.

The first phase of the study involved growing various combinations of six North American lake algal species in 180 aquarium-like tanks at a laboratory in the basement of U-M’s Dana Building, home of the School of Natural Resources and Environment.

Each 10-liter (2.2-gallon) tank contained either one, two, four or six species of algae. Half the tanks received a constant temperature of 71.6 degrees Fahrenheit (22 C). The other half were assigned to a variable-temperature treatment to simulate outdoor conditions. The temperature fluctuated between 62.6 and 80.6 F (17 and 27 C) at weekly intervals.

The experiment lasted for seven weeks and showed that mixtures of algal species were, on average, more stable and reliable in the face of temperature fluctuations.

The second phase of the NSF-funded project involved field-testing the most promising algal species and species mixtures by growing them outdoors in 80 fiberglass cattle tanks at the university’s E.S. George Reserve, a 1,300-acre biological station near Pinckney, Mich. That work was conducted in summer 2016, and the results are now being analyzed.

In both phases of the study, colleagues at U-M’s College of Engineering have used a technique called hydrothermal liquefaction to measure the quantity and quality of the combustible oils, or biocrude, produced by the various algal combinations. They are also comparing the ability of single and multispecies systems to reuse and recycle wastes for additional growth.

However, a number of hurdles must be overcome to make industrial-scale production of algal biocrude oil feasible and economically competitive with fossil fuel-based crude oil. When grown in large outdoor ponds, algae suffer from crop instabilities due to variations in sunlight and temperature, as well as disturbances from pests, diseases and other unwanted invaders. 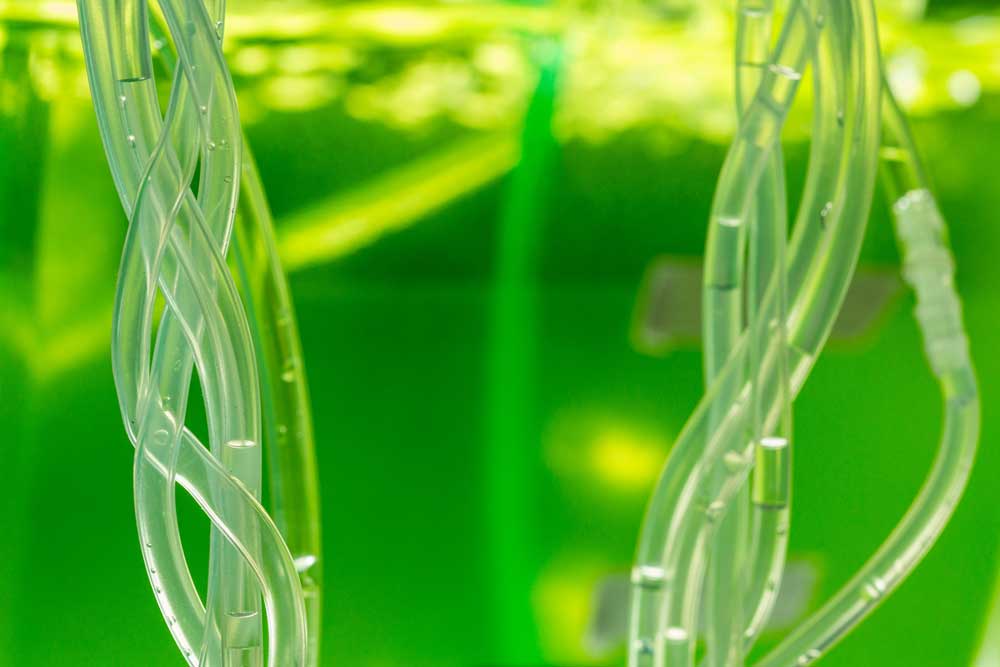 The Environmental Science & Technology paper, “Power of plankton: effects of algal biodiversity on biocrude production and stability,” was published online Nov. 9. First author Narwani is now at the Swiss Federal Institute of Aquatic Science and Technology. The other authors, in addition to Cardinale, are Aubrey Lashaway of the School of Natural Resources and Environment, David Hietala of the U-M Department of Chemical Engineering, and former U-M engineering faculty member Phillip Savage, now at Pennsylvania State University.

The same research team, with the addition of SNRE postdoctoral researcher Casey Godwin, had another paper from the same study published online Nov. 29 in Bioresource Technology. It showed that when the fertilizers used to grow algae are recycled into tanks containing a single species of algae, those monocultures often fail to grow—or even die—when trying to recycle and reuse their own spent fertilizer.

In contrast, mixtures of algae not only survive on spent fertilizer but thrive on recycling their own nutrients, often growing substantially more biomass by reusing the same fertilizer over and over.