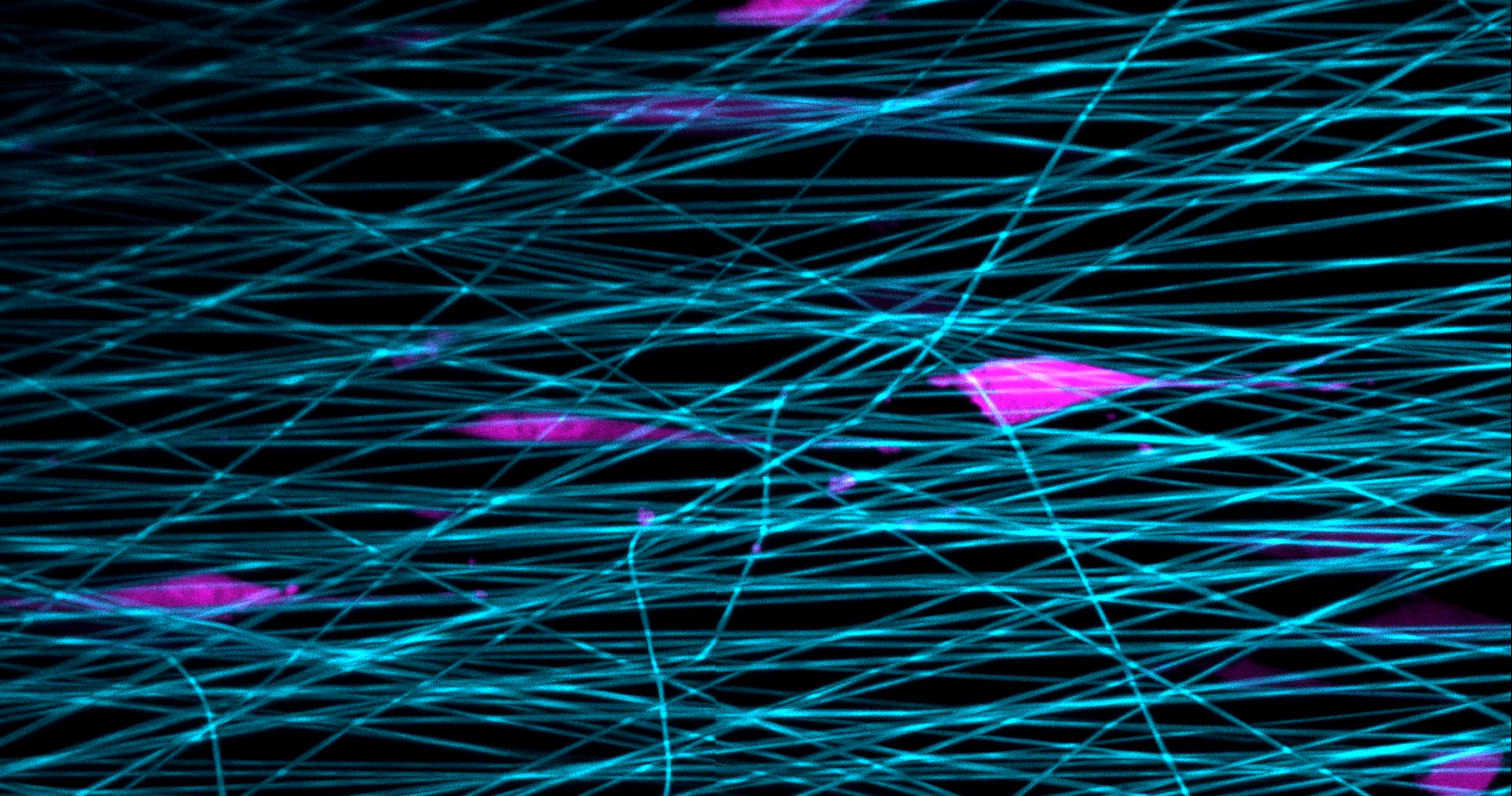 Human fibroblast cells (pink) in the process of slingshotting themselves forward in a 3D scaffold designed to mimic the conditions of the body (blue). Fibroblasts are the most common cells found in connective tissue. Biomedical engineering researchers at the University of Michigan documented this “slingshot migration,” which is five times faster than any other previously documented type of cell movement.

The researchers say this method of cell movement, observed for the first time, could be involved in the spread of cancer. And in the future it could potentially be harnessed to direct the movement of healthy cells for tissue repair therapies.

The cells pull on and stretch the surrounding fibrous tissue, eventually using that tension to launch themselves forward. The motion looked familiar enough that researchers dubbed it “slingshot migration.”

We found that cells can move in this very distinct way that results in effective migration far faster than anything previously reported. 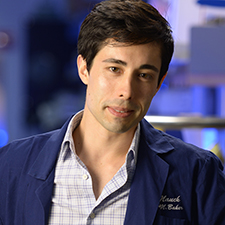 “We found that cells can move in this very distinct way that results in effective migration far faster than anything previously reported,” said Brendon Baker, U-M assistant professor of biomedical engineering.

William Wang, a doctoral student in biomedical engineering, was the first to witness it. He was studying the properties of stromal tissue that either hinder or promote the spread of cells in diseases such as cancer.

“I was definitely shocked seeing a cell move so fast,” Wang said. “What was even more surprising was then capturing this migration mode in multiple cell types and finding that their speed was so much faster than traditional modes of cell migration.”

Research in this area typically involves observing cells under the microscope on a flat petri dish. But that doesn’t provide a complete picture.

Under a microscope, cells stretch and subsequently “slingshot” forward. Biomedical engineering researchers at the University of Michigan documented this rapid movement, a migration as much as five times faster than previously observed. Image credit: Brendan Baker and William Wang.

“These flat, two-dimensional surfaces really don’t resemble the structure and mechanical behavior of real tissues, especially the ones where so much of the migration in our body is occurring,” Wang said.

The researchers study cells in a 3D fibrous environment, which is closer to the real thing.

Most organs can be broken down into two parts: functional elements such as sacs, ducts or glands called the parenchyma, and the surrounding collagenous tissue that supports the blood vessel network, called the stroma or interstitia.

Cancer cells that remain within the parenchyma, where most originate, can typically be dealt with effectively by surgical removal. When they migrate into the stromal tissue, they pose a much greater threat.

“It’s metastasis, or the spread of the cancer, that kills patients,” Baker said. “For that to happen, the cells have to break out of the parenchyma and cross through the fibrous stroma to reach blood or lymphatic vessels or the lymphatic system.”

The research, published in Nature Communications, is funded by the National Institutes of Health.