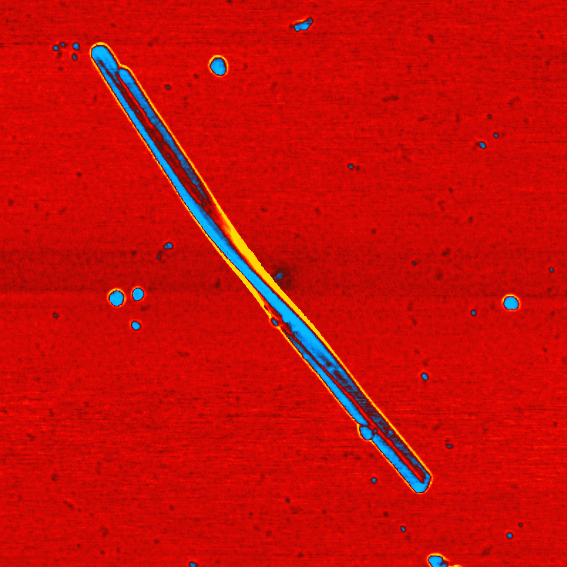 A twisted ribbon of cadmium telluride nanoparticles. University of Michigan engineering researchers have discovered that circularly polarized light can affect the chirality, or handedness, of nanoparticle chains. Their findings could provide insights into the structure of life. Image credit: Jihyeon YeomANN ARBOR—Twisted light from ancient stars may have played a role in locking in aspects of the structure of life on Earth, and new findings from the University of Michigan provide insights into how that process may have occurred.

The research explores a property called “chirality,” which refers to the arrangement of atoms in molecules that aren’t symmetrical. Often, more than one arrangement of a molecule can occur in nature. But different arrangements can behave in different ways, even though their chemical composition is the same.

Human hands are often cited as examples of chiral structures. A left hand and a right hand are made of the same materials, but they’re not identical. They’re mirror images. The amino acids and sugars within us also come in what amount to left- and right-hand versions, but unlike hands, living organisms only utilize the left-oriented amino acids and the right-oriented sugars.

Scientists can make these amino acids and sugars in the lab, and when they do, roughly equal numbers of left- and right-facing molecules result. But the template for life on Earth includes just one version of each. It’s a mysterious phenomenon called “homochirality.” The new study led by U-M underscores the role that light may have played in its origins.

Researchers have long theorized that a certain type of spiraling starlight could have set the chirality of relatively large organic, carbon-based molecules such as amino acids and sugars in early living organisms. The starlight would have shone on the cloud of dust and gas that eventually became the Earth.

The U-M study showed that light could have a similar, very pronounced effect on tinier, inorganic nanoparticles that aren’t carbon-based.

In the experiments, the researchers exposed one group of nanoparticles to counterclockwise circularly polarized light and another group to clockwise polarized light. In each group, roughly 30 percent more of the resulting particle ribbons carried the chirality of the light they were exposed to. That percentage is ten times higher than effects researchers have observed in larger molecules, Kotov said.

He discussed the mechanism behind the results. At the start of the experiments, the nanoparticle solutions contained a mix of left- and right-oriented particles. The researchers theorize that the ones with a chirality that matched the light they were exposed to reacted in ways that caused them to grow, or attract more particles to them. When the light rotation direction matched the particles’ orientation, chemical reactions could occur, including oxidation, which involves loss of electrons. Those free, negatively charged electrons added charges to the mix. The charges enabled the nanoparticles to react with others in ways that favor more of the same.

Kotov says the first living organisms were likely microscale, and he’s quick to point out that the new work doesn’t say nanoparticle ribbons of any sort are precursors to life.

“We don’t know yet how the organic molecules and inorganic nanoparticles interacted,” Kotov said, “or how chirality evolved to become left for amino acids and on right for sugars. But we think the search for answers should involve consideration of not just organic matter but this additional player of inorganic nanoparticles, which is actually quite significant.”

Beyond any insights into the structure of life, the research could be used to develop a new and cheaper way to make molecules that face left or right. Current methods of inducing chirality, as this process is called, are difficult and expensive, yet they have applications in areas such as pharmaceutical drugs, wearable or implanted sensors, telecommunications and display technologies. Chiral nanostructures could help double the informational bandwidth of these devices using left and right polarized light, Kotov says.

A paper titled “Chiral templating of self-assembling nanostructures by circularly polarized light” is published in the current edition of Nature Materials. The research is supported in part by the Center for Solar and Thermal Energy Conversion, an Energy Frontier Research Center funded by the US Department of Energy; the National Science Foundation, the National Institutes of Health, among other sources.