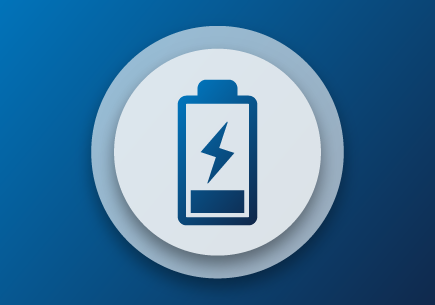 ANN ARBOR—An issue that has long plagued renewable energy facilities is how to efficiently store energy collected from sun or wind.

Now, University of Michigan and University of Utah chemists have developed an energy-storing molecule that is 1,000 times more stable than current compounds, potentially leading to a longer-lived, more efficient battery.

The researchers are working to develop industrial-scale batteries that can store large amounts of energy for deployment when the sun sets or the wind stops blowing.

Deep-cycle lead batteries or lithium ion batteries are already on the market, but each type presents challenges, including the significant environmental hazards of disposal. Also, these kinds of batteries wear out relatively quickly.

“It’s similar to what happens to your cell phone battery. You use the phone all day, wearing the battery down, and you charge it at night. Hopefully, the cell phone lasts for a few years, but you notice after a while the battery doesn’t charge anymore,” said Melanie Sanford, a U-M professor of chemistry. “That’s exactly the type of problem that we’re trying to address.”

The U-M chemists invented the first generation of the molecule, then gave it to the Utah researchers, who tested how stable the molecule actually was. The first compound the team developed was not as stable as the current compound.

“Our first compound had a half-life of about eight to 12 hours,” said University of Utah chemist Matthew Sigman, referring to the time period in which half of the compound would decompose. “The current compound that we were able to predict out was on the order of months.”

All batteries contain chemicals that store and release electrical charge. However, the type that the Utah and U-M researchers developed, called redox flow batteries, aren’t like the batteries in cars or cell phones.

Instead, they use a central set of inert electrodes connected to two tanks, which hold the molecules, called anolytes and catholytes, that store and release charge. Passing solutions of these molecules over the electrodes in one direction charges the battery, while passing them through the cell the other way releases the charge, converting it to electricity.

Current redox flow batteries contain molecules based on vanadium, a toxic heavy metal, that are dissolved in water. Formulating the batteries is a chemical balancing act, since molecules that can store more charge tend to be less stable, losing charge and rapidly decomposing. 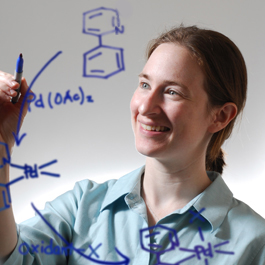 Sanford’s lab developed and tested potential electrolyte molecules, and sought to use predictive technology to help design better battery compounds. Minteer contributed expertise in electrochemistry and Sigman employed a computational method, which uses the structural features of a molecule to predict its properties. A similar approach is widely used in drug development to predict the properties of candidate drugs.

The team’s work found that a candidate compound decomposed when two molecules interacted with each other.

“These molecules can’t decompose if they can’t come together,” Sanford said. “You can tune the molecules to prevent them from coming together and annihilating each other.”

Tuning a key parameter of those molecules, a factor describing the height of a molecular component, essentially placed a bumper or deflector shield around the candidate molecule.

The most exciting anolyte reported in the study is based on the organic molecule pyridinium, the researchers say. It contains no metals and is intended to be dissolved in an organic solvent instead of water, further enhancing its stability. Other compounds exhibited longer half-lives, but this anolyte provides the best combination of stability and redox potential, which is directly related to how much energy it can store.

Sigman, Minteer and Sanford are now working to identify a catholyte to pair with this and future molecules. Other engineering milestones lay ahead in the development of a new redox flow battery technology, but determining a framework for improving battery components is a key first step.

“It’s a multipart challenge, but you can’t do anything if you don’t have stable molecules with low redox potentials,” Sanford said. “You need to work from there.”

The results are reported in the Journal of the American Chemical Society.