‘Standing on a comet’: Rosetta mission will contribute to space weather research 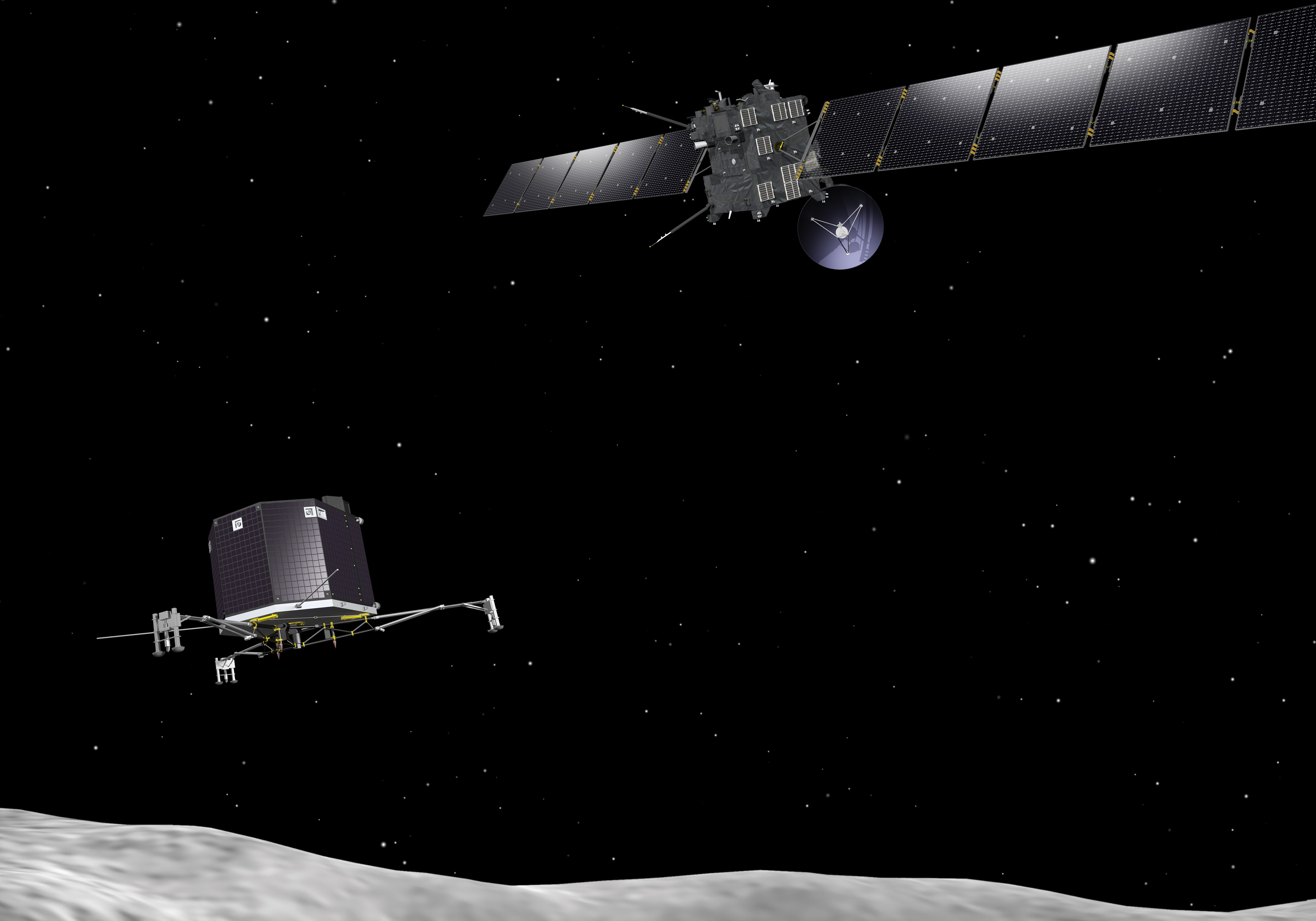 An artist’s interpretation of the Rosetta orbiter deploying the Philae lander to comet 67P/Churyumov–Gerasimenko. Image credit: J. Huart, ESAANN ARBOR—A comet-bound spacecraft that spent more than two years in a deep sleep mode woke up on Jan. 20 to begin the home stretch of its decade-long journey to a mile-wide ball of rock, dust and ice.

Rosetta—a European Space Agency-led mission that involves University of Michigan engineers and scientists—is on track to be the first craft to actually land on a comet as well as track it for an extended period of time.

The Philae lander is scheduled to latch on to the core of comet 67P/Churyumov–Gerasimenko in November. Rosetta’s orbiter will circle it through 2015. No mission has ever attempted such an in-depth look at one of these relics of the earliest days of our solar system.

Engineers at U-M’s Space Physics Research Lab built electronic components for an onboard instrument that’s believed to be the most sensitive of its kind ever flown in space. And a team of researchers will be involved in the mission science as well.

While most of the big questions Rosetta aims to answer deal with the origin and evolution of the solar system, U-M scientists will make a unique contribution that could provide very practical insights into how the sun and planets interface today.

They’ll analyze measurements taken at the comet to study solar wind interactions that can lead to solar storms. The solar wind is a stream of charged particles emanating from the sun. Solar storms are bursts of activity that can threaten astronauts and damage Earth’s satellites and electric grid.

“How the solar wind operates is one of the biggest outstanding questions about the solar system today. By studying how it interacts with cometary gases, we can learn a lot about the composition of the solar wind,” said Tamas Gombosi, the Rollin M. Gerstacker Professor of Engineering in the Department of Atmospheric, Oceanic and Space Sciences. 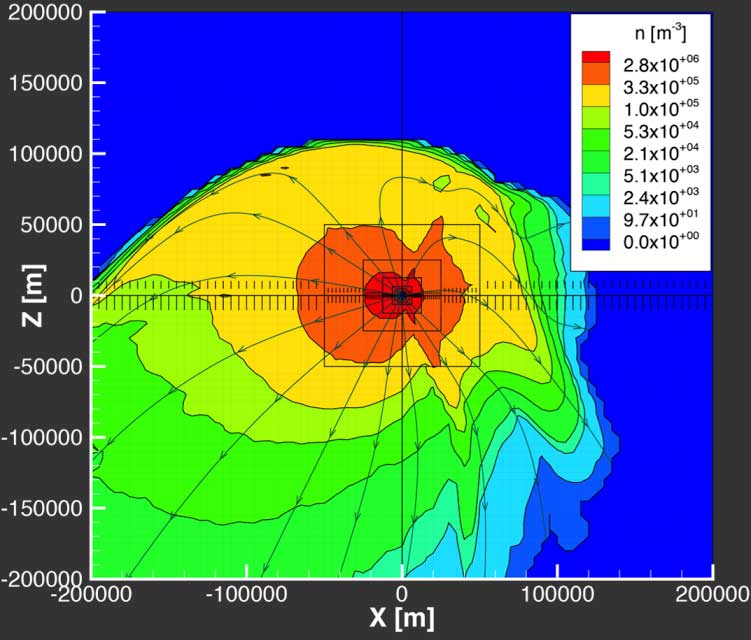 A simulation of the distribution of dust particles around the comet nucleus, which itself is only about a mile in diameter. Image credit: Valeriy Tenishev, University of MichiganGombosi and his research group are leaders in the field of space weather. A model they developed was recently adopted by the national Space Weather Prediction Center.

At the sun’s equator, the wind travels rather slowly, Gombosi said. It moves faster at high latitudes. Interactions between the two varieties can lead to magnetospheric storms. Earth orbits near the equator, so it’s hard to study the fast wind from our vantage point.

“But comets pass through all of it. With their help, we can study the fast solar wind,” Gombosi said.

Gombosi and other U-M researchers will be involved in additional Rosetta goals. They’ll study and simulate how quickly the comet outgases material from its nucleus to its tail as it rings around the sun. They’ll be involved in examining what elements are in the comet’s tail, atmosphere and ionosphere, as well as how fast the electrified particles in the ionosphere are traveling.

Michael Combi, the Freeman Devold Miller Collegiate Research Professor in the Department of Atmospheric, Oceanic and Space Sciences, is a co-investigator on several instruments. He’ll look into the rate at which the comet’s core is sublimating, or turning from a solid into a gas, and he’ll also work on a team that’s analyzing those gases. They’ll explore the levels of carbon monoxide and carbon dioxide, for example. They can’t detect carbon dioxide from Earth.

“It’s very difficult to observe some of the chemical species when they’re far away and faint. Carbon dioxide is probably the second most abundant species at most comets, but it’s not been observed in the thousands we’ve looked at from Earth,” said Combi, who has studied comets for more than 30 years. 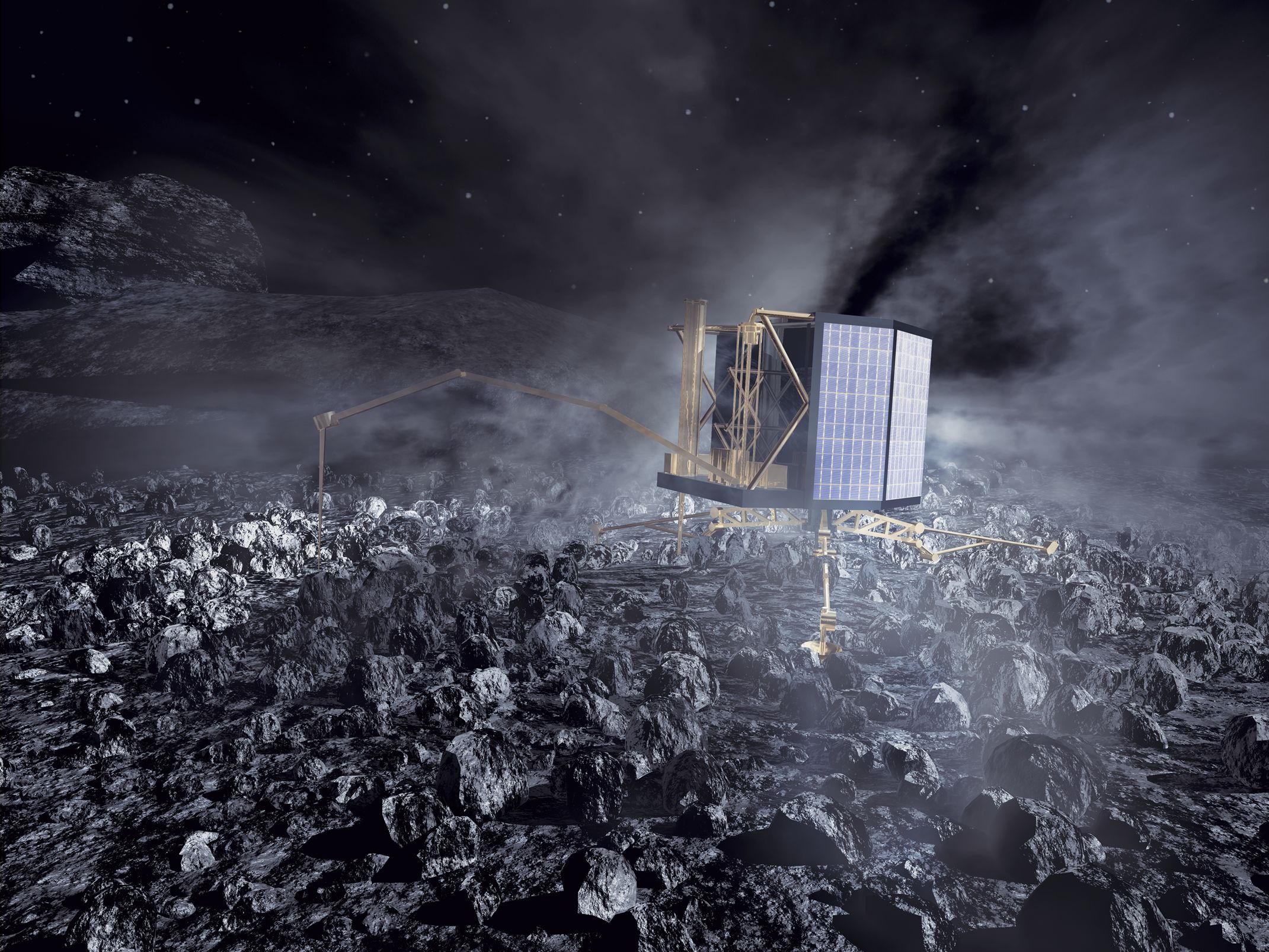 An artists interpretation of the Rosetta mission lander, named Philae, on the core of comet 67P/Churyumov-Gerasimenko. It’s expected to land in November. Image credit: ESA / AOES MedialabComets—small rock and ice bodies—were present in the nebula that spawned the solar system and have been orbiting ever since in far away, cold belts either just past the orbit of Neptune or a quarter of the distance to the nearest star. For scientists, they’re archeological artifacts that help them understand how the solar system formed and evolved. They’re believed to have delivered Earth’s oceans and perhaps the seeds of life in organic materials.

Comet 67P/Churyumov–Gerasimenko is one of the smallest bodies humans have ever tried to land on. Its gravity is about 1,000 times less than that of Earth.