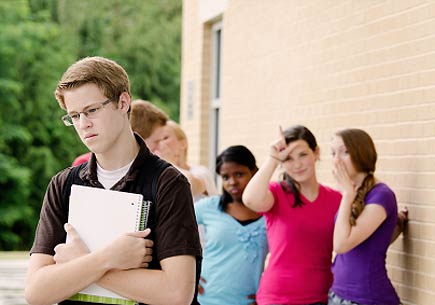 ANN ARBOR—People may believe words are not harmful, but the phrase “that’s so gay” can have negative consequences for gay, lesbian or bisexual students, a new University of Michigan study indicated.

The phrase is often used by young people to describe something as stupid or undesirable. It’s part of the vocabulary among students at all types of educational institutions, including colleges.

Although subtle, such language is hostile, and can be harmful to sexual minorities, said Michael Woodford, an assistant professor of social work and the study’s lead author.

The findings appear in the current issue of the Journal of American College Health.

Researchers examined the impact of hearing “that’s so gay” among 114 gay, lesbian and bisexual students between the ages of 18 to 25 through an online survey.

Students reported how often they heard the phrase on campus in the past 12 months. They also answered questions about their perceived social acceptance on campus, physical well-being, mental health and willingness to disclose their sexual orientation.

Practically every respondent reported hearing “that’s so gay” on campus at least once in the past 12 months. Nearly half of the students said they’ve heard the phrase more than 10 times within the year. Only 14 respondents—or 13 percent—hadn’t heard it at all.

Hearing the phrase more often was found to increase students’ risk for feeling isolated at the university and for health problems.

“Given the nature of gay-lesbian-bisexual stigma, sexual minority students could already perceive themselves to be excluded on campus and hearing ‘that’s so gay’ may elevate such perceptions,” Woodford said.

Increased risk for physical health problems is likely related to a stress reaction that may occur when students hear the phrase, he said.

‘That’s so gay’ conveys that there is something wrong with being gay,” Woodford said. “And, hearing such messages about one’s self can cause stress, which can manifest in headaches and other health concerns.

“There is a lot of attention being given to addressing LGBT bullying on college campuses. Obviously, that work is important, but our results suggest that we must also address low-level hostility, including ‘that’s so gay.’ Policies and educational programs are needed to help students, staff and faculty to understand that such language can be harmful to gay students. Hopefully, these initiatives will help to eliminate the phrase from campuses.”