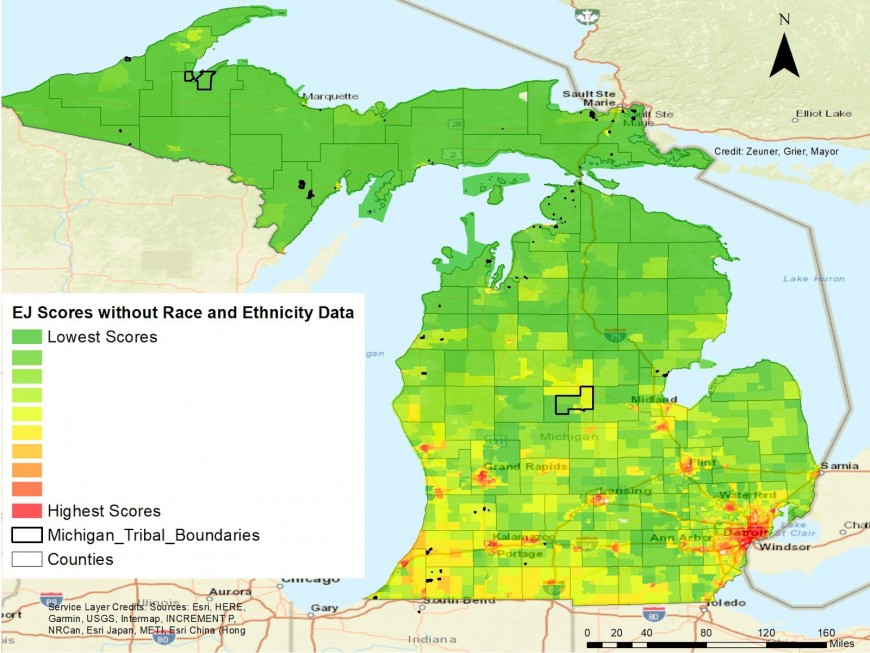 The researchers interviewed stakeholders from California, Minnesota, Washington, New Jersey, Maryland and Michigan, where the state’s official environmental justice screening tool, MiEJSCREEN, is expected to be released in 2022. Several benefits of screening tools were identified by stakeholders, including their ability to share information, aid in community advocacy-based actions, and influence regulatory or policy-based decision-making.

“Many frontline community members across the United States have shared their experiences of pollution and its impacts on public health. However, these testimonies are rarely incorporated into decision-making processes by polluting industries, or state and local authorities,” said Molly Blondell, one of the study’s co-authors and a graduate of the U-M School for Environment and Sustainability.

“By combining socioeconomic data with health data, these EJ screening tools can visualize areas with the greatest environmental injustices and support community testimony. Our interviewees spoke of the versatility that these tools have to aid in the development of EJ policy and community-oriented decision-making processes.”

This study is timely, given the “considerable interest around the country in developing state-specific EJ screening tools that can help locate and document where disproportionate cumulative environmental burdens occur,” said Paul Mohai, a professor at the U-M School for Environment and Sustainability and one of the study’s other co-authors.

While there are many takeaways about the benefits of screening tools, researchers found that there may also be stakeholder resistance to the development of screening tools, which can occur both internally (within state governments and agencies) and externally (from outside industries, groups and organizations).

For instance, screening tools may be met with resistance by industry, state officials or community members who question the tools’ relative scope, data accuracy and capacity for implementation, the study shows.

“We found that, while each state had their own socio-political concerns, there were common groups that our interviewees thought were resistant,” said Arianna Zrzavy, the study’s lead author, who also is a graduate of the U-M School for Environment and Sustainability. “Some groups were already familiar to us, as they have appeared in environmental justice literature. However, the ways that state governments or agencies would be resistant to a screening tool—by impacting their resources or internal processes, for example—was surprising for us to learn.”

The researchers sought suggestions from stakeholders on how to overcome that resistance through framing and messaging.

“Many of our interviewees noted that resistance to EJ screening tools came from a lack of understanding of how these tools can be used for decision-making,” Blondell said. “In response to this, our interviewees discussed how EJ screening tools could be framed as information-gathering and educational resources. They also noted how these tools are adaptable, as they can capture state-level and local-level matters.”

While environmental justice screening tools are “crucial for promoting EJ policies,” Zrzavy noted, a key takeaway is that “these tools are only impactful insofar as they are used to correct environmental injustices. State decision-makers in Michigan and across the U.S. must work to improve the health and well-being of communities experiencing cumulative impacts by using these tools together with community testimony.”