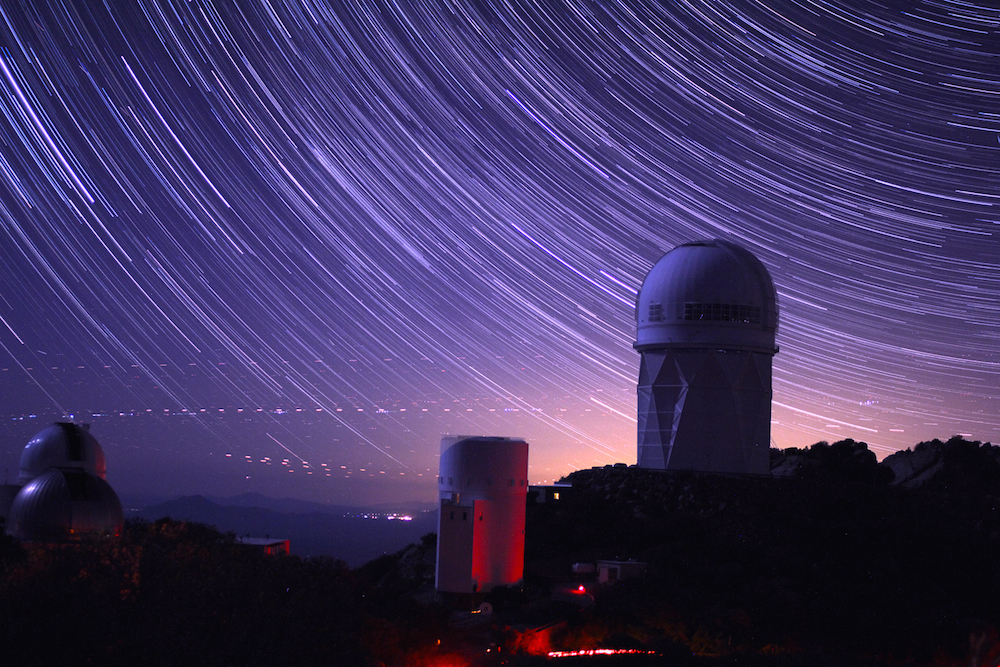 Star trails take shape around the 14-story Mayall Telescope dome in this long-exposure image. The Dark Energy Spectroscopic Instrument was installed inside this dome. Image credit: P. Marenfeld and NOAO/AURA/NSF

A five-year quest to map the universe and unravel the mysteries of “dark energy” is beginning officially today, and University of Michigan researchers were instrumental in the project’s development.

The Dark Energy Spectroscopic Instrument, or DESI, is an international collaboration under the aegis of the Department of Energy’s Lawrence Berkeley National Laboratory with primary funding from DOE’s Office of Science. The project aims to create a 3D map of the universe, unraveling the mysterious dark energy. To complete its quest, the instrument will capture and study the light from tens of millions of galaxies and other distant objects in the universe.

To do this, the instrument will aim its robotic array of 5,000 fiber-optic “eyes” at the night sky to capture the first images showing its unique view of galaxy light. The robotic eyes were assembled by U-M students and technicians, under the leadership of physicist Gregory Tarlé. The team delivered a total of 7,300 robotic fiber positioners, including spares.

“DESI is the most advanced cosmic cartography experiment ever attempted. By observing the spectrum of tens of millions of galaxies and quasars, ten times more than any previous experiment, DESI will construct a detailed three-dimensional map of our universe,” said Tarlé, U-M professor of physics and chair of the DESI Institutional Board.

“With this map, we will be able to trace the impact of the mysterious dark energy through 11 billion years of cosmic time and attempt to understand its nature. This is such an exciting time, marking the culmination of almost a decade of work by dozens of institutions from all over the world to build DESI, carry out the targeting surveys and make it work on the sky.”

DESI’s components are designed to automatically point at preselected sets of galaxies, gather their light and then split that light into narrow bands of color to precisely map their distance from Earth and gauge how much the universe expanded as this light traveled to Earth. In ideal conditions, DESI can cycle through a new set of 5,000 galaxies every 20 minutes.

“We will measure 10 times more galaxy spectra than ever obtained. These spectra get us a third dimension,” said project director Michael Levi of the Berkeley Lab.

Instead of two-dimensional images of galaxies, quasars and other distant objects, he explained, the instrument collects light, or spectra, from the cosmos such that it “becomes a time machine where we place those objects on a timeline that reaches as far back as 11 billion years ago.”

The formal start of DESI’s five-year survey follows a four-month trial run of its custom instrumentation that captured spectra from four million galaxies—more than the combined output of all previous spectroscopic surveys.

The DESI instrument resides at the retrofitted Mayall Telescope at the National Science Foundation’s Kitt Peak National Observatory in Arizona.

“We’re not using the biggest telescopes,” said Berkeley Lab’s David Schlegel, who is a DESI project scientist. “It’s that the instruments are better and very highly multiplexed, meaning that we can capture the light from many different objects at once.”

In fact, the telescope “is literally pointing at 5,000 different galaxies simultaneously,” Schlegel said. On any given night, as the telescope is moved into a target position, the optical fibers align to collect light from galaxies as it is reflected off the telescope mirror. From there, the light is fed into a bank of spectrographs and CCD cameras for further processing and study.

Spectra collected by DESI are the components of light corresponding to the colors of the rainbow. Their characteristics, including wavelength, reveal information such as the chemical composition of objects being observed as well as information about their relative distance and velocity.

As the universe expands, galaxies move away from each other, and their light is shifted to longer, redder wavelengths. The more distant the galaxy, the greater its “redshift.” By measuring galaxy redshifts, DESI researchers will create a 3D map of the universe. The detailed distribution of galaxies in the map is expected to yield new insights on the influence and nature of dark energy.

“Dark energy is one of the key science drivers for DESI,” said project co-spokesperson Kyle Dawson, professor of physics and astronomy at University of Utah. “The goal is not so much to find out how much there is—we know that about 70% of the energy in the universe today is dark energy—but to study its properties.”

The DESI collaboration is honored to be permitted to conduct astronomical research on Iolkam Du’ag (Kitt Peak), a mountain with particular significance to the Tohono O’odham Nation, the scientists say.