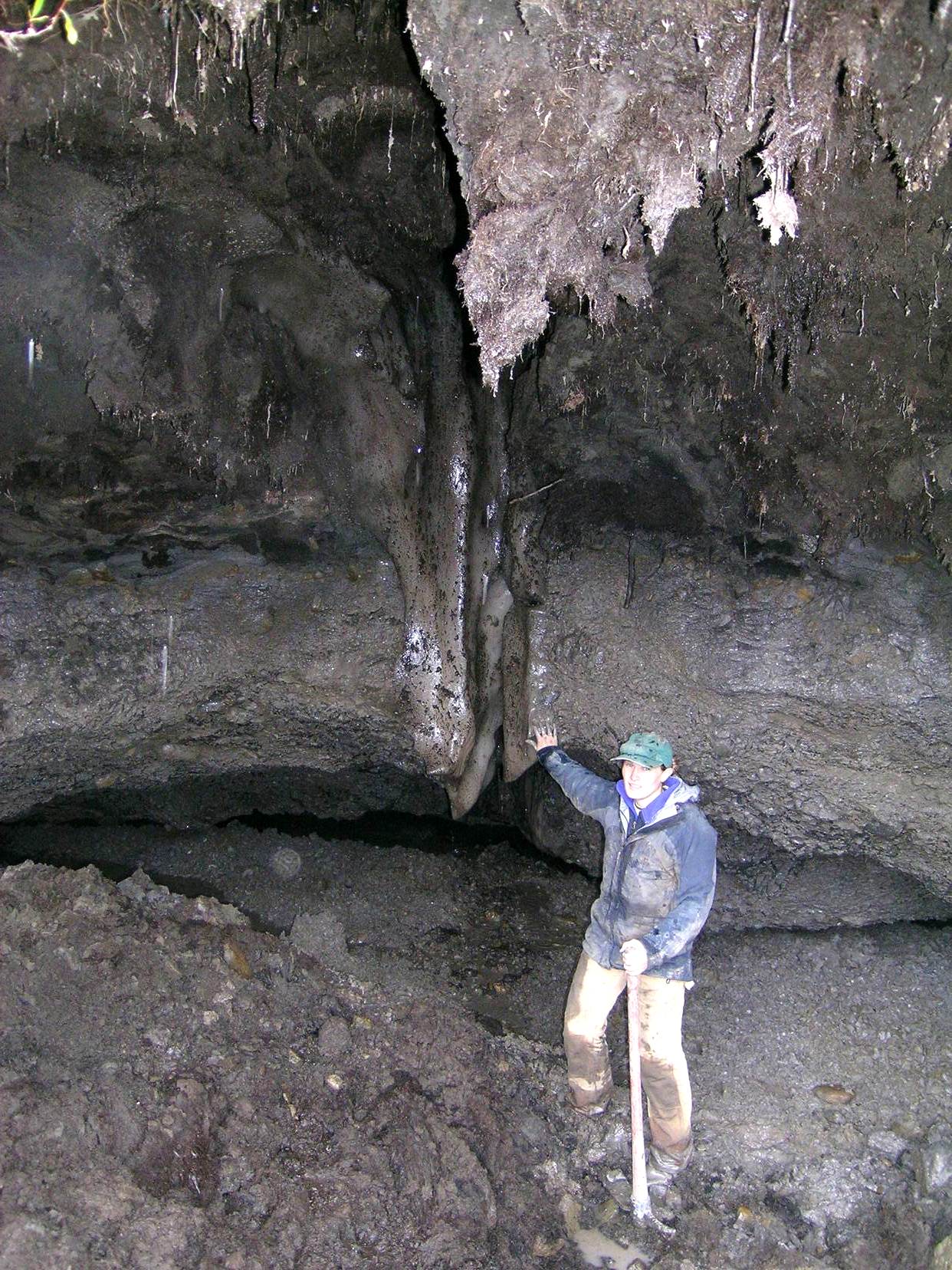 Former University of Michigan graduate student Katy Keller with a hand on eroded and melting permafrost near Toolik Lake, Alaska. The gully erosion seen here is a type of thermokarst failure, formed when ice-rich, permanently frozen soils are warmed and thawed. Image credit: George KlingANN ARBOR—Ancient carbon trapped in Arctic permafrost is extremely sensitive to sunlight and, if exposed to the surface when long-frozen soils melt and collapse, can release climate-warming carbon dioxide gas into the atmosphere much faster than previously thought.

University of Michigan ecologist and aquatic biogeochemist George Kling and his colleagues studied places in Arctic Alaska where permafrost is melting and is causing the overlying land surface to collapse, forming erosional holes and landslides and exposing long-buried soils to sunlight.

They found that sunlight increases bacterial conversion of exposed soil carbon into carbon dioxide gas by at least 40 percent compared to carbon that remains in the dark. The team, led by Rose Cory of the University of North Carolina, reported its findings in an article to be published online Feb. 11 in the Proceedings of the National Academy of Sciences.

“Until now, we didn’t really know how reactive this ancient permafrost carbon would be — whether it would be converted into heat-trapping gases quickly or not,” said Kling, a professor in the U-M Department of Ecology and Evolutionary Biology. EEB graduate student Jason Dobkowski is a co-author of the paper.

“What we can say now is that regardless of how fast the thawing of the Arctic permafrost occurs, the conversion of this soil carbon to carbon dioxide and its release into the atmosphere will be faster than we previously thought,” Kling said. “That means permafrost carbon is potentially a huge factor that will help determine how fast the Earth warms.”

Tremendous stores of organic carbon have been frozen in Arctic permafrost soils for thousands of years. If thawed and released as carbon dioxide gas, this vast carbon repository has the potential to double the amount of the heat-trapping greenhouse gas in the atmosphere on a timescale similar to humanity’s inputs of carbon dioxide due to the burning of fossil fuels.

Recent climate change has increased soil temperatures in the Arctic and has thawed large areas of permafrost. Just how much permafrost will thaw in the future and how fast the carbon dioxide will be released is a topic of heated debate among climate scientists. 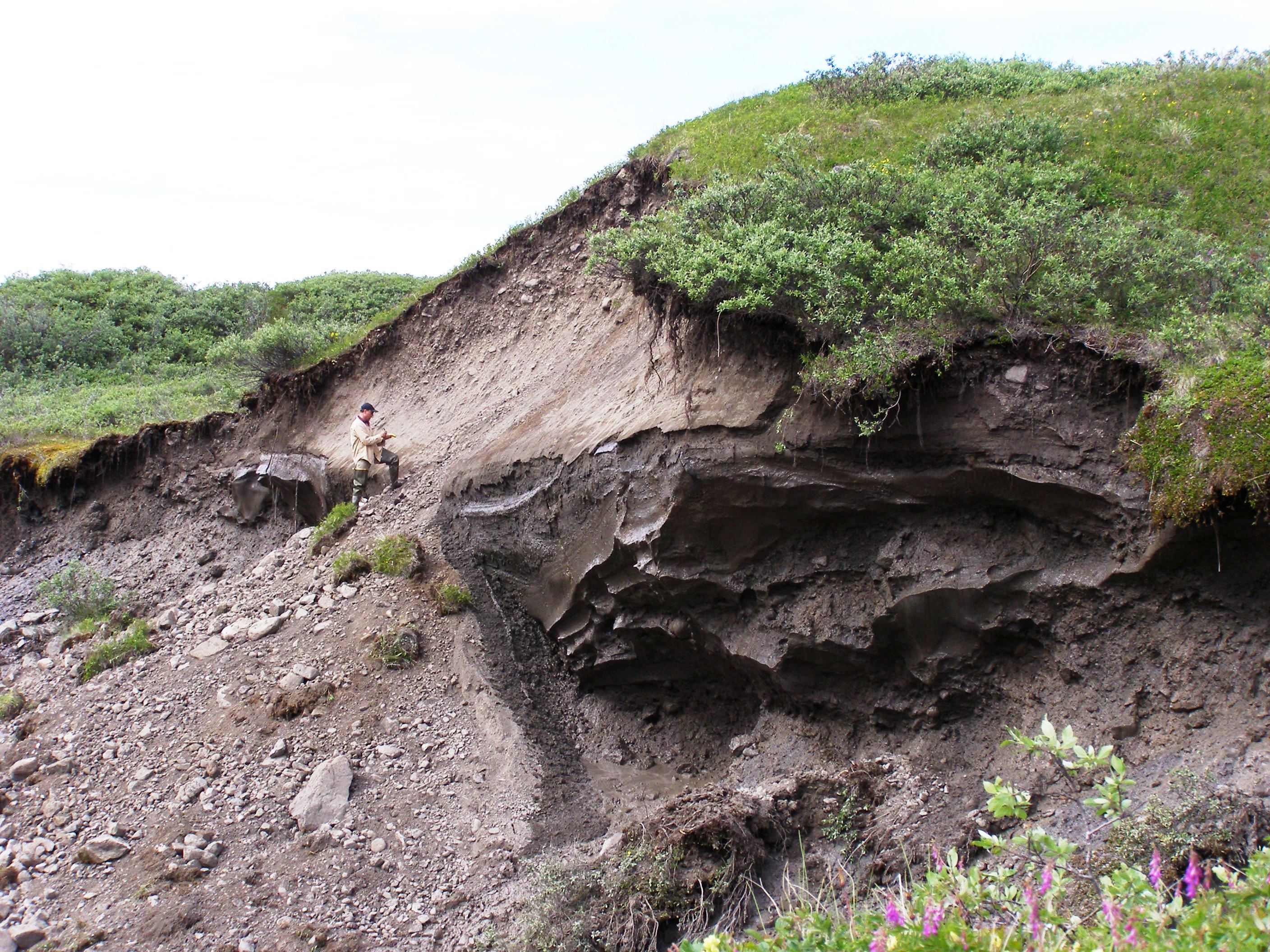 Thermokarst failures change the trajectory of the debate on the role of the Arctic in global climate, according to Kling and his colleagues. The unanticipated outcome of the study reported in PNAS is that soil carbon will not be thawed and degraded directly in the soils. Instead, the carbon will be mixed up and exposed to sunlight as the land surface fails.

Sunlight—and especially ultraviolet radiation, the wavelengths that cause sunburn—can degrade the organic soil carbon directly to carbon dioxide gas, and sunlight can also alter the carbon to make it a better food for bacteria. When bacteria feed on this carbon, they respire it to carbon dioxide, much the same way that people respire carbon in food and exhale carbon dioxide as a byproduct.

“Whether UV light exposure will enhance or retard the conversion of newly exposed carbon from permafrost soils has been, until recently, anybody’s guess,” said University of North Carolina’s Cory, the study’s lead author. “In this research, we provide the first evidence that the respiration of previously frozen soil carbon will be amplified by reactions with sunlight and their effects on bacteria.”

“We know that in a warmer world there will be more of these thermokarst failures, and that will lead to more of this ancient frozen carbon being exposed to surface conditions,” Kling said. “While we can’t say how fast this Arctic carbon will feed back into the global carbon cycle and accelerate climate warming on Earth, the fact that it will be exposed to light means that it will happen faster than we previously thought.”

The researchers analyzed water from seven thermokarst failures near Toolik Lake, Alaska, as well as 27 other undisturbed sites nearby.

In addition to Cory, Kling and Dobkowski, Byron Crump of the University of Maryland was a co-author of the PNAS paper. The research was supported by several grants from the National Science Foundation.