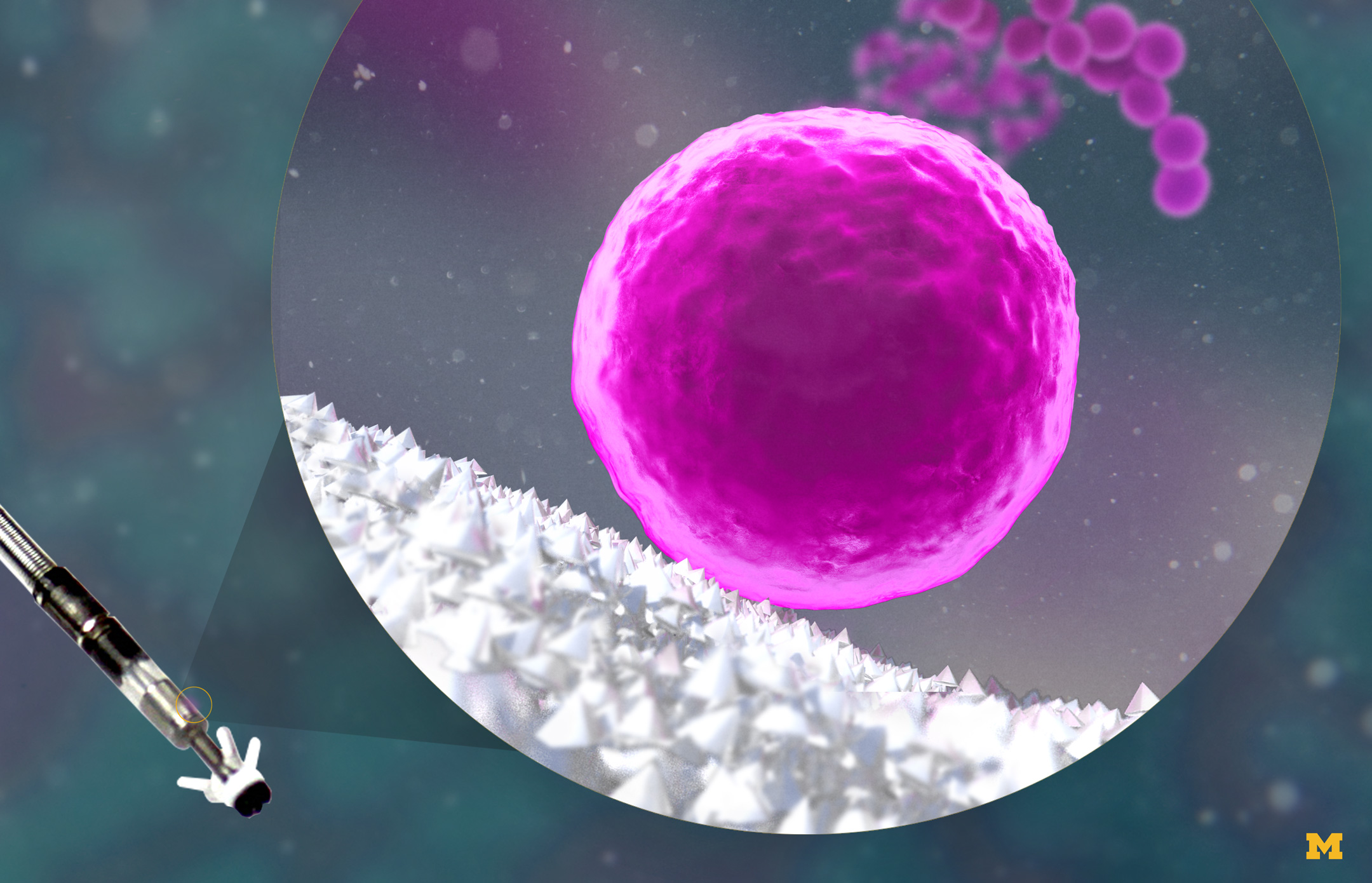 The illustration shows a pacemaker lead with a coating of nanoscale zinc oxide pyramids. These pyramids prevent MRSA, an antibiotic-resistant strain of bacteria common in hospitals, from colonizing coated surfaces well. Image credit: Steve Alvey, Michigan Engineering Communications & MarketingANN ARBOR—A common ingredient in sunscreen could be an effective antibacterial coating for medical implants such as pacemakers and replacement joints.

University of Michigan researchers found that a coating of zinc oxide nanopyramids can disrupt the growth of methicillin-resistant Staphylococcus aureus (MRSA), reducing the film on treated materials by over 95 percent. About a million implanted medical devices are infected each year with MRSA and other bacterial species.

“It is extremely difficult to treat these infections,” said J. Scott VanEpps, a clinical lecturer and research fellow in the U-M Medical School’s department of emergency medicine, whose team led the biological study.

Treatment involves either a long course of antibiotics, which can lead to antibiotic resistance and toxic side-effects, or the implants must be surgically replaced, which can be quite extensive for devices such as heart valves and prosthetic joints, VanEpps said.

Ideally, doctors would like to prevent the infections from occurring in the first place. One option is to coat the devices with something that bacteria can’t grow on. The new results, published in the journal Nanomedicine, suggest that such a coating could be made from nanoparticles of zinc oxide—a sunscreen and diaper rash cream ingredient that makes the lotion thicker and relatively opaque.

If the nanoparticles are shaped like a pyramid with a hexagon-shaped base, they are very effective at preventing an enzyme called beta-galactosidase from breaking down lactose into the smaller sugars glucose and galactose, which the bacteria use for fuel.

Shape is important, both for the enzyme and for the nanoparticles. The enzyme needs to be able to twist in order to cut the lactose into the smaller sugars. Two amino acids, or protein building blocks, sit opposite one another across a groove in the enzyme. The lactose fits into the groove, and the amino acids come together to catalyze the breakup into glucose and galactose.

“Although more studies need to be carried out, we believe that zinc oxide nanopyramids interfere with this twisting motion,” said Nicholas Kotov, the Joseph B. and Florence V. Cejka Professor of Chemical Engineering, whose group made the nanoparticles.

The team’s research suggests that part of the nanoparticle—an edge or the point—inserts itself into the groove. By clogging up just one of the four grooves, the nanoparticles can shut down the whole enzyme by preventing the twisting action.

To explore the concept of an antibacterial coating, Kotov’s group covered some pegs with the nanopyramids and then VanEpps’ team stuck them into a substance that would allow bacteria to grow. They evaluated four species of bacteria on coated and uncoated pegs—two staphylococcal species (including MRSA), one species that causes pneumonia and E. coli.

After 24 hours of growth, the number of viable staphylococcal cells recovered from the coated pegs was 95 percent less than those from the uncoated pegs. The pneumonia and E. coli species were less susceptible to the nanoparticles.

“While the coating was unable to completely eradicate all staphylococcal cells, this dramatic reduction could likely enable antibiotic treatments to succeed or simply allow the human immune system to take over without the need for antibiotics,” VanEpps said.

If this is indeed how the nanopyramids operate, then the coating should be no trouble for human cells, whose membrane enclosures don’t have the same vulnerabilities. It may also account for why the coating isn’t nearly as effective on E. coli, which doesn’t wear its cell wall enzymes on its sleeve.

Many hurdles stand between the nanoparticle coating and clinical use in patients. The researchers must find out how such a coating would affect human cells near the implant and explore how the nanopyramids affect other enzymes in humans and bacteria.

“The strong antibacterial activity against MRSA and other pathogens is an exciting finding,” Kotov said. “We want to better understand the mechanisms of the antibacterial function to fine tune its inhibitory activity and to identify the structural similarities among enzymes that pyramidal nanoparticles can inhibit.”

The study was supported by the U.S. National Science Foundation, U.S. National Institutes of Health, National Research Foundation of Korea and Society for Academic Emergency Medicine.