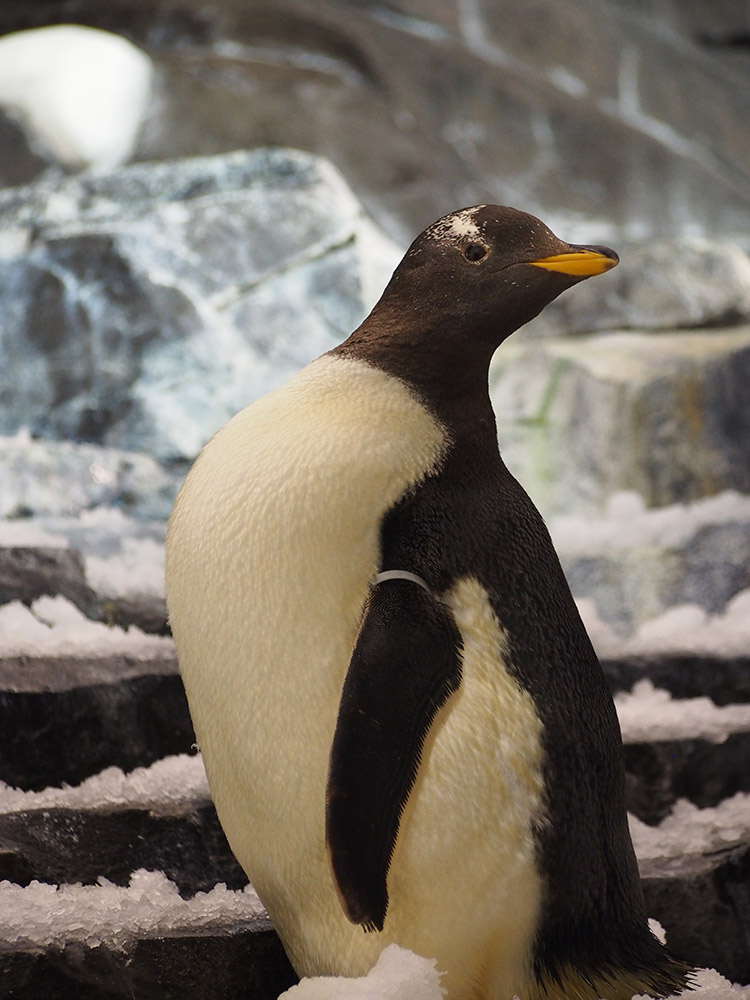 A gentoo penguin. Image credit: Jianzhi ZhangANN ARBOR—A University of Michigan-led study of penguin genetics has concluded that the flightless aquatic birds lost three of the five basic vertebrate tastes—sweet, bitter and the savory, meaty taste known as umami—more than 20 million years ago and never regained them.

Because penguins are fish eaters, the loss of the umami taste is especially perplexing, said study leader Jianzhi “George” Zhang, a professor in the U-M Department of Ecology and Evolutionary Biology.

“Penguins eat fish, so you would guess that they need the umami receptor genes, but for some reason they don’t have them,” he said. “These findings are surprising and puzzling, and we do not have a good explanation for them. But we have a few ideas.”

Zhang suspects the sensory changes are tied to ancient climate-cooling events in Antarctica, where penguins originated. His leading hypothesis is that the genes were lost after cold Antarctic temperatures interfered with taste perception.

A paper on the topic by Zhang and two Chinese colleagues is scheduled for online publication Feb. 16 in the journal Current Biology. The first author, Huabin Zhao, was a U-M postdoctoral researcher under Zhang when most of the study was conducted.

Vertebrates typically possess five basic tastes: sweet, sour, salty, bitter and umami. Over the past 15 years, remarkable progress in understanding the molecular basis of taste has opened the door to inferring taste abilities from genetic data through the examination of taste receptor genes.

Compared with mammals, birds are thought to be poor tasters, due in part to the observations that they have fewer taste buds on their tongues and lack teeth for chewing food. Previous genetic studies showed that the sweet taste receptor gene is absent from the genomes of all birds examined to date. 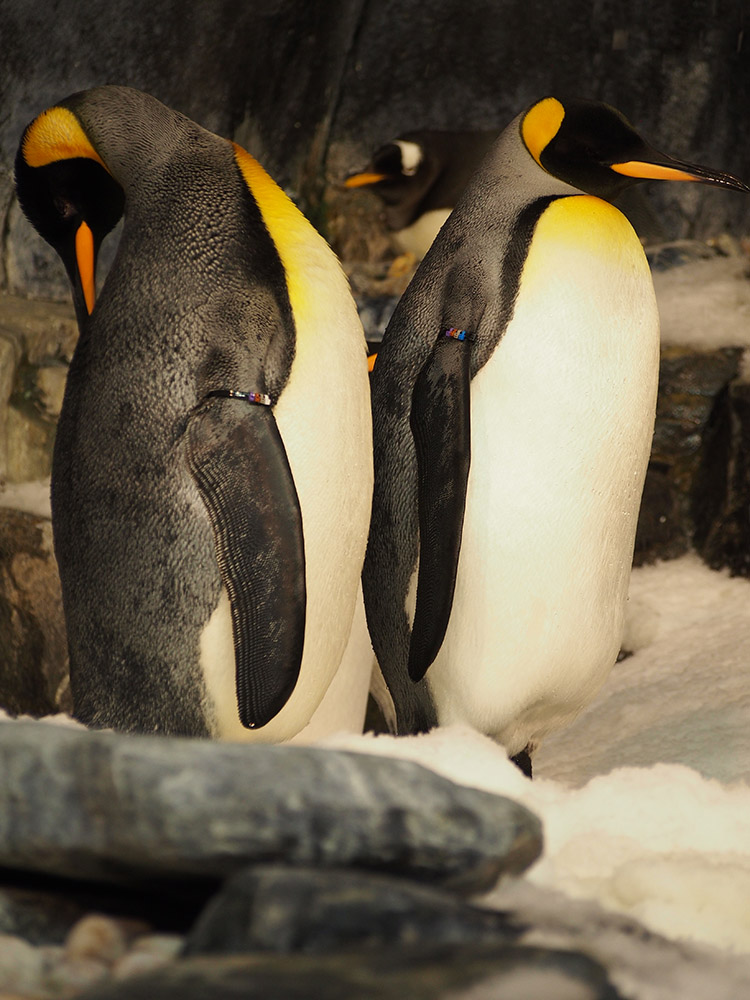 A king penguin. Image credit: Jianzhi ZhangZhang said the penguin study was prompted by an email from colleagues at BGI, a genomics institute in China. Researchers there had sequenced genomes from Adelie and emperor penguins and could not find some of the taste genes. They wanted Zhang to help determine whether the absent genes were the result of incomplete sequencing or a true evolutionary deletion.

Zhang and his colleagues took a closer look at the Adelie and emperor data. In addition, they analyzed bird tissue samples (chinstrap, rockhopper and king penguins, plus eight other closely related non-penguin bird species) provided by the U-M Museum of Zoology. They also reviewed publicly available genomes for 14 other non-penguin bird species.

They found that all five penguin species lack functional genes for the receptors of sweet, umami and bitter tastes. In the Adelie and emperor genomes, the umami and bitter taste receptor genes have become “pseudogenes,” genetic sequences resembling a gene but lacking the ability to encode proteins. Pseudogenes often result from the accumulation of multiple mutations over time.

The genomes of all non-penguin birds studied—including egrets, finches, flycatchers, parrots, macaws, falcons, chickens and mallards—contain the genes for the umami and bitter tastes but, as expected, lack receptors for the sweet taste. The researchers concluded that all penguins have lost three of the five vertebrate senses.

“Taken together, our results strongly suggest that the umami and bitter tastes were lost in the common ancestor of all penguins, whereas the sweet taste was lost earlier,” the authors wrote.

Penguins originated in Antarctica after their separation from tubenose seabirds around 60 million years ago, and the major penguin groups separated from one another about 23 million years ago. The taste loss likely occurred during that 37-million-year span, which included periods of dramatic climate cooling in Antarctica, Zhang said.

In this gustatory whodunit, Zhang’s leading suspect is the protein Trpm5, which is required for the transduction of sweet, umami and bitter taste signals to the nervous system in all vertebrates. Previous studies on mice showed that Trpm5 does not function well at cold temperatures. 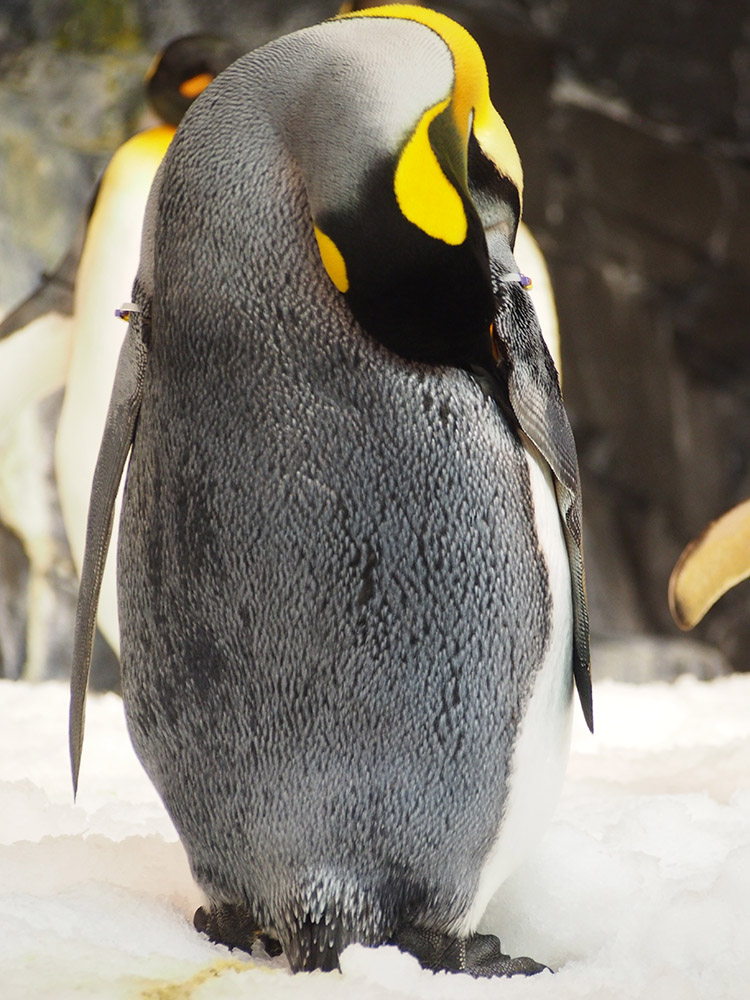 A king penguin. Image credit: Jianzhi Zhang“This give us a hint, perhaps, that this loss of taste genes has something to do with the inability of this protein to work at lower temperatures,” said Zhang, whose former postdoc, Zhao, is planning follow-up experiments to see how well Trpm5 functions at the temperature of seawater used by Antarctic penguins.

In mice, the protein Trpm5 is also involved in insulin secretion and the detection of pheromones. If the same is true in penguins, then Trpm5 is essentially being asked to work simultaneously at a warm body temperature and at the frigid ambient temperature, which may not be possible. When such a dilemma arises, the more important function is retained by natural selection, while the less important one is sacrificed, Zhang said.

Vertebrate tastes are mediated by taste receptors usually located in taste buds found on the upper surface of the tongue and elsewhere in the mouth. The human tongue has several thousand taste buds.

A 1998 anatomical study of four penguin species found no taste buds in their tongues, strongly suggesting a reduction in taste function. The same study found that penguin tongues possess only a single type of lingual papillae, the raised protrusions that hold most of the taste buds in humans, which have four types of papillae.

But it’s not clear what came first, the anatomical adaptations or the sensory changes, Zhang said.

“Their behavior of swallowing food whole, and their tongue structure and function, suggest that penguins need no taste perception, although it is unclear whether these traits are a cause or a consequence of their major taste loss,” he said.

First author Zhao is now a professor at China’s Wuhan University. The other author is Jianwen Li of the China National GeneBank, BGI-Shenzhen.

The work was supported by the U.S. National Institutes of Health, the National Natural Science Foundation of China and Wuhan University. The U-M Museum of Zoology provided tissue samples of bird species, and BGI-Shenzhen shared penguin and egret genome sequences.