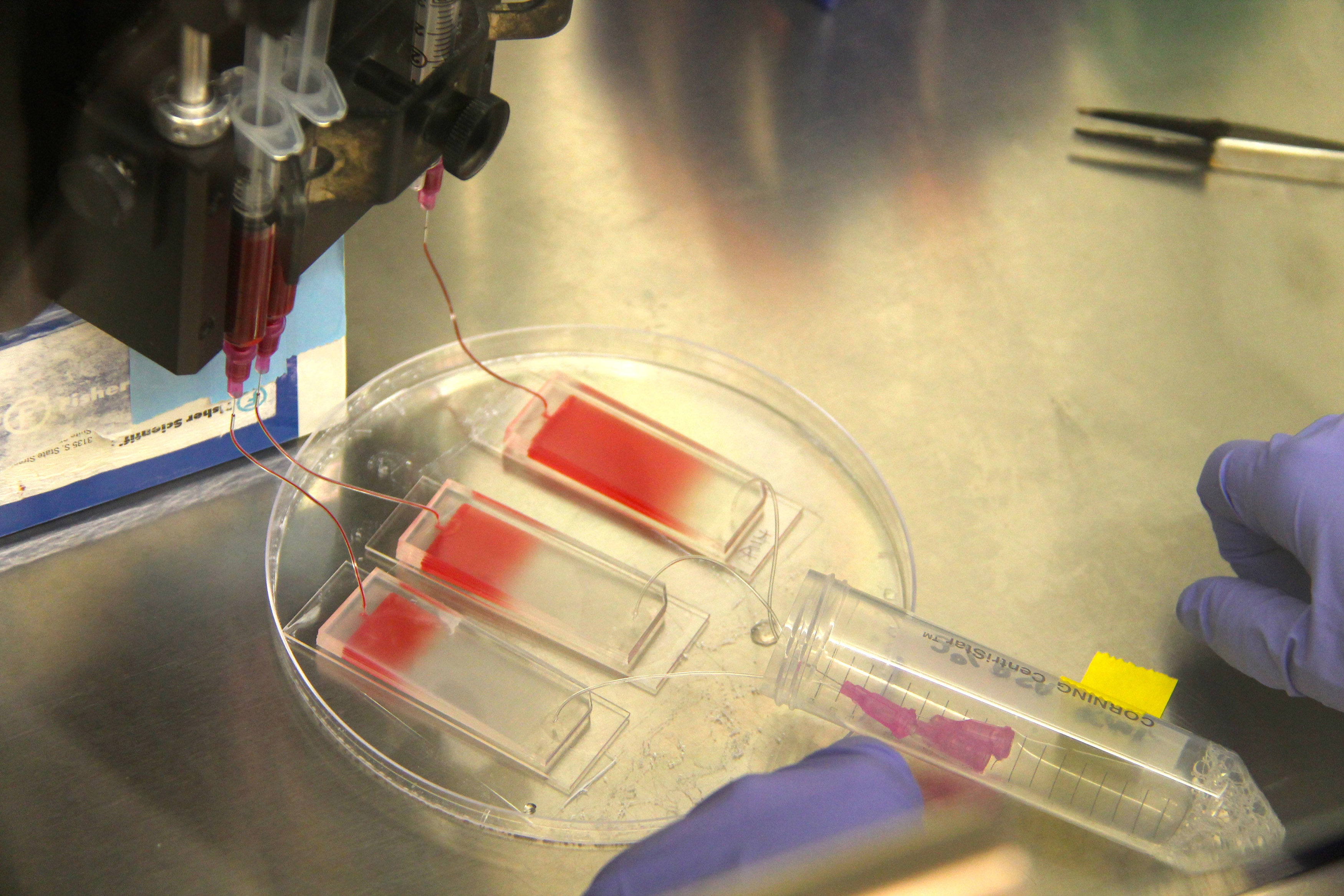 A blood sample is pumped into a microfluidic chip as part of the microfluidic co-culture process. Image credit: Jennifer Zhuo ZhangANN ARBOR—In a development that could lead to a deeper understanding of cancer and better early-stage treatment of the disease, University of Michigan researchers have devised a reliable way to grow a certain type of cancer cells from patients outside the body for study.

The new technique is more than three times as effective as previous methods.

Researchers say it’s a major step forward in the study of circulating tumor cells, which are shed from tumors and circulate through the blood of cancer patients. They’re believed to cause metastasis, the spread of cancer through the body that’s responsible for nearly 90 percent of cancer-related deaths.

The cells also hold valuable genetic information that could lead doctors to more informed treatment decisions and even tailor-made therapies for individual patients. And because the cells circulate in the blood, they can be gathered with a blood draw rather than a more invasive tissue biopsy. But progress has been slow, largely because the cells are rare in early-stage cancer patients.

The new capture and culture method changes this by providing a reliable way to get usable numbers of circulating tumor cells from even early-stage patients. It grew new cells from 73 percent of the patients in a recent study, more than three times the success rate of previous methods and a first for early-stage cancers.

It’s a major game changer, according to Sunitha Nagrath, U-M assistant professor of chemical engineering who is working to develop the new technology. 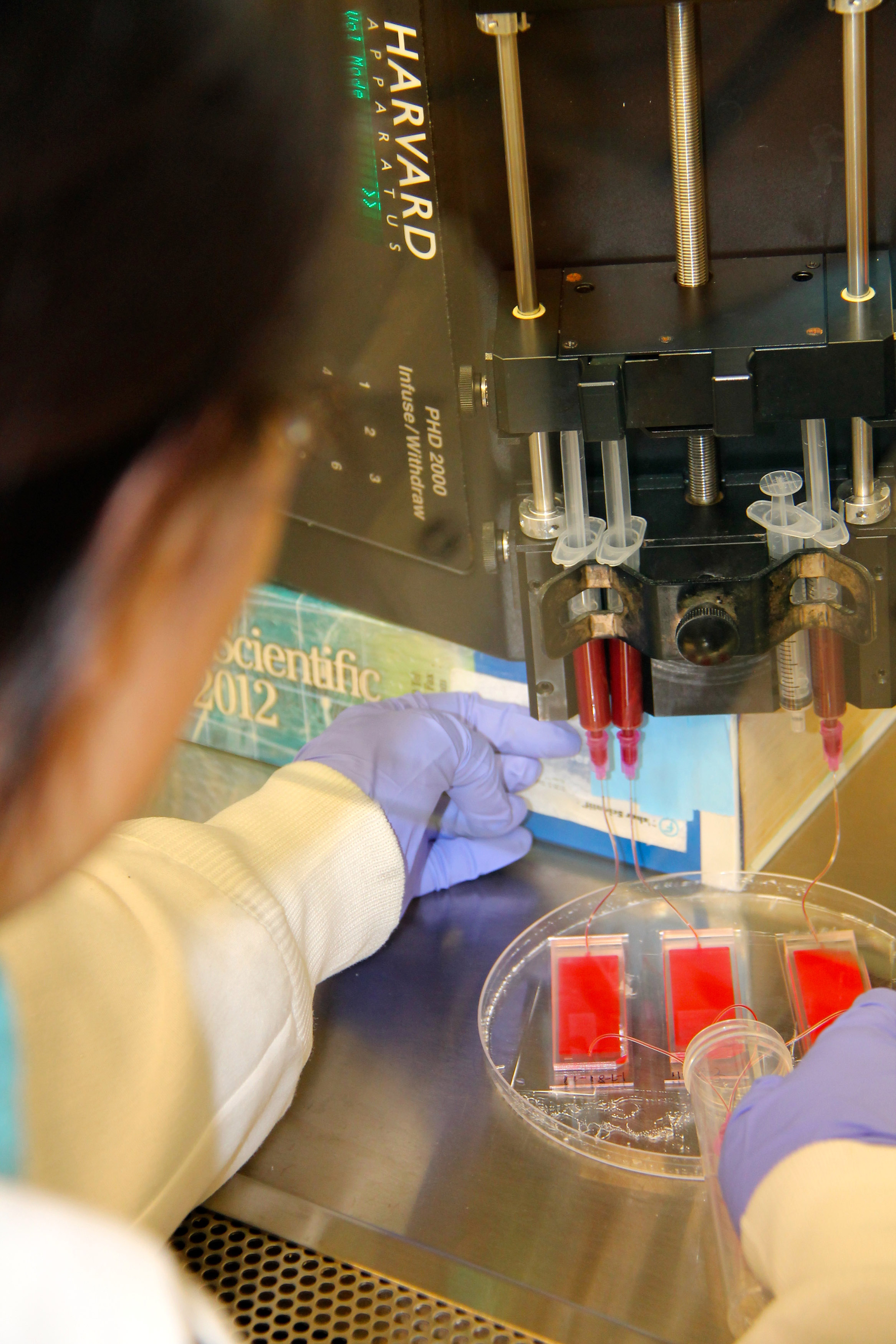 U-M researcher Jennifer Zhuo Zhang runs an experiment using the microfluidic chip device. Image credit: Jennifer Zhuo Zhang“This culture method gives clinicians a way to study each patient’s cancer much earlier and much more frequently,” Nagrath said. “We can look for resistance to therapy and test potential therapeutics. It also moves us closer to being able to predict metastasis.”

The technique may also bring doctors closer to their goal of capturing cancer cells for diagnosis with a quick, non-invasive “blood biopsy” instead of the tissue biopsies that are currently used. This could enable them to keep closer tabs on each patient’s status and make more informed treatment decisions.

“We envision a point-of-care solution in four to five years,” said Nithya Ramnath, U-M associate professor of medical oncology. “You’d give blood and a short time later, doctors would have a whole repertoire of what’s going on with your tumor.”

The capture and culture process starts with a microfluidic chip device that captures cancer cells as a blood sample is pumped across it. The research team used a chip made of polydimethylsiloxane on a 1-inch by 3-inch glass slide. They covered the chip with microscopic posts that slow and trap cells, then coated it with antibodies that bind to the cancer cells.

After the cancer cells were captured on the chip, the team pumped in a mixture of collagen and Matrigel growth medium. They also added cancer-associated fibroblast cells that were grown in the lab of Diane Simeone, surgical director at the Multidisciplinary Pancreatic Cancer Clinic of the U-M Cancer Center. This created a three-dimensional environment that closely mimics the conditions inside the body of a cancer patient.

The captured cancer cells prospered in the mixture, reproducing additional cells in 73 percent of tested samples. It was a dramatic improvement over earlier methods, which studied later-stage cancer patients and saw success rates of only around 20 percent. 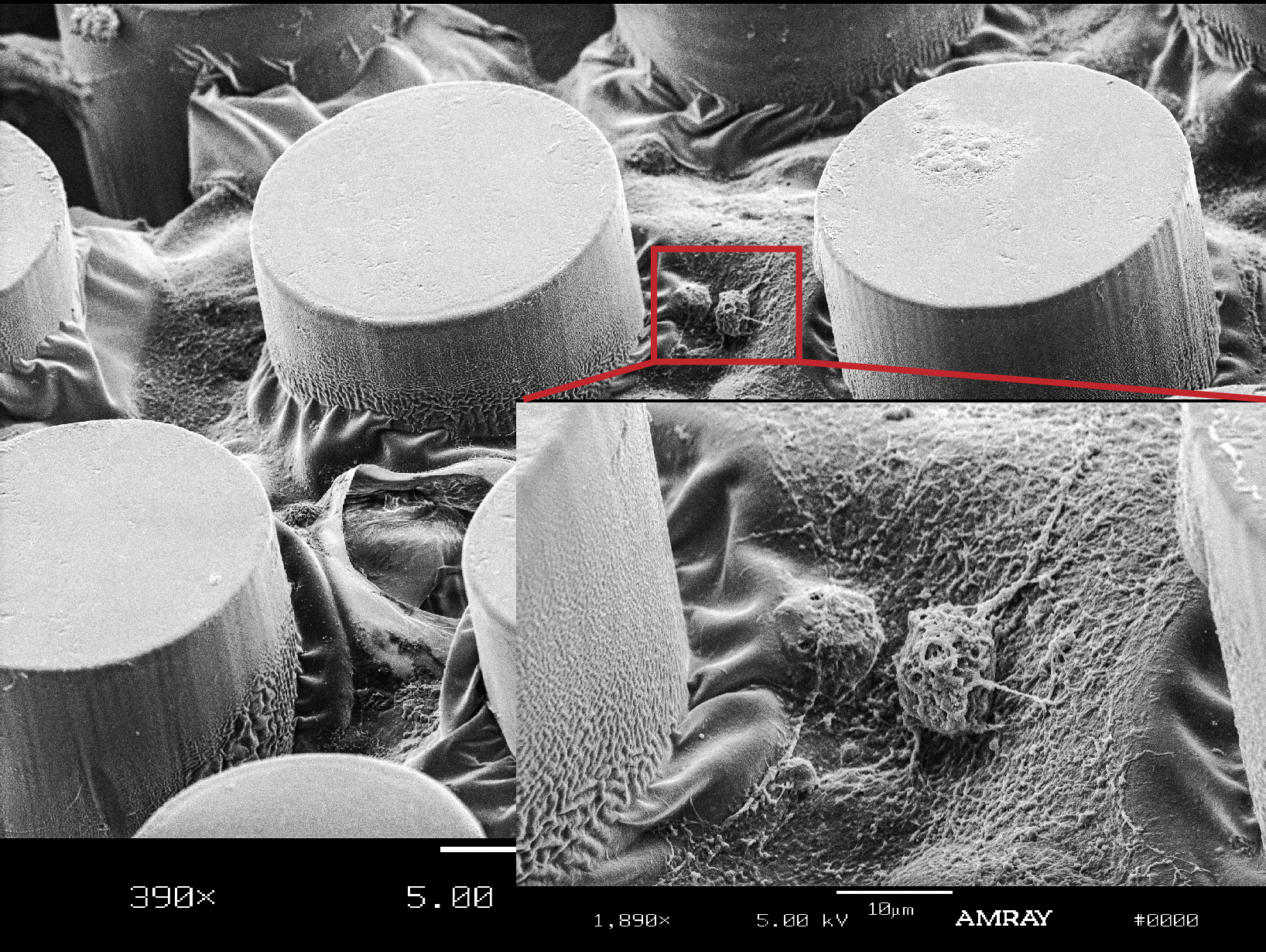 Electron microscopy shows cultured CTC cells (circled in red) growing on the chip device used in the study. Image credit: Jennifer Zhuo Zhang“Primary cancer cells don’t grow well on a flat surface, and like people, they need neighbors to really prosper,” Nagrath said. “The collagen and Matrigel provide a three-dimensional environment for the cells to grow, while the cancer-associated fibroblasts give them the neighboring cells they need.”

The technology can be applied to most cancers, including breast, lung, pancreatic and others. It could enable doctors to follow the progression of each patient’s disease much more closely, says Dr. Max Wicha, Distinguished Professor of Oncology and director of the U-M Comprehensive Cancer Center, who is working to develop the technology.

“Cancer cells change constantly and they can quickly develop resistance to a given treatment,” Wicha said. “A device like this will enable us to follow the cancer’s progression in real time. If a cancer develops resistance to one therapy, we’ll be able to quickly change to a different treatment.”

A paper on the findings is published online in Oncotarget and will appear in a forthcoming print edition. The research is conducted under the Translational Oncology Program, which brings together scientists from across U-M to translate research findings into potential new treatments for cancer. Funding is provided by the National Institutes of Health Director’s New Innovator Award (1DP2OD006672-01).