“Darjeeling’s tea industry is in the midst of what most connoisseurs and market watchers would consider to be a revival, driven in part by fair trade,” said Sarah Besky, assistant professor of anthropology and natural resources and environment, who has spent years studying the lives of tea workers in this remote region of northeastern India, nestled in the Himalayan foothills.

“But ironically, fair trade and other programs that purport to provide justice to plantation workers in the age of global ‘ethical consumption’ are not having much effect in providing justice to the tea pluckers, who are mainly Indian Nepali, or Gorkha, women.”

In the U.S., the most-prized first-flush tea leaves—designated SFTGFOP, meaning “Super Fine Tippy Golden Flowery Orange Pekoe”—sell for more than $60 for eight ounces, when you can get them. But the field workers who pick the delicate leaves earn just over a dollar for a full day’s work.

“Women in Darjeeling are keenly aware of the irony that they produce some of the world’s most expensive tea yet get paid a miniscule fraction of what this tea fetches abroad,” said Besky, who lived on the tea plantations talking with workers, plantation owners and area activists for months at a time from 2007 through 2010.

She is the author of “The Darjeeling Distinction: Labor and Justice on Fair-Trade Tea Plantations in India,” published by the University of California Press. 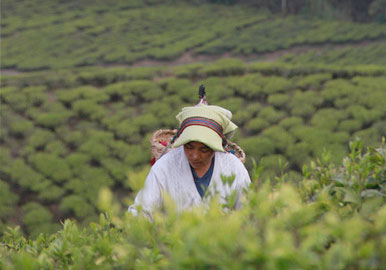 Established in the 1850s by the British, Darjeeling’s “tea gardens” are now owned by Indians who continue to operate them as plantations. Workers live in houses provided by their employers and are given allowances for food and certain household necessities—all in partial payment of wages.

“‘Fair-trade plantation may seem like an oxymoron,” Besky said. “Plantation workers are not small farmers. They are laborers who, like peasants, live and work on land they do not own.”

Besky discusses the impact of fair trade and other movements that brought Darjeeling tea plantations into the 21st-century market for geographically distinguished and ethically sourced food, and into India’s multiethnic democracy.

These movements have World Trade Organization Geographical Indication status, a distinction Darjeeling shares with famous place and food names like Scotch, Champagne, and Roquefort, and the Gorkhaland agitation, a longstanding movement to form an Indian state separate from West Bengal, to include Darjeeling, its tea plantations and its majority of Indian Nepalis, or Gorkhas.

“Each of these strategies attempt to make plantation life ‘better’ by situating the plantation within a ‘Third World agrarian imaginary,'” Besky said. “In essence, each is an effort to undo the injustices of the colonial past, yet each only partially addresses the concerns of plantation workers themselves.

“There is a deep disconnect between national, global and regional calls for justice, and the lives and work of the very people in whose names those calls have gone forth. The workers are keenly aware that in the market for justice, the tea plantation is not going anywhere.”

Besky is also a postdoctoral fellow in the Michigan Society of Fellows.