Teach-out organizers to takeover Instagram to talk arts and technology 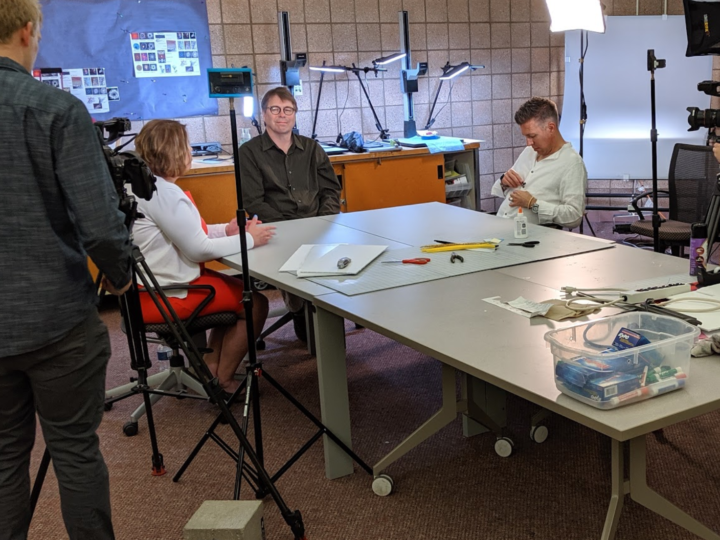 Not two words we usually think of together. Or if we do, the images that might come to mind are songs played on some kind of portable device, an instrument tethered to an amplifier, or a graphic illustration created on computer for a print publication.

But the creators of a new teach-out want participants to think about arts and technology in broader terms—to recognize the combination is something with historical significance that holds future promise for an increasingly digital society.

With support from the Office of Academic Innovation, they plan to use the latest technology to bring the idea to life in an “Arts and Technology Teach-Out” takeover July 1-31. The interactive learning opportunity will be unlike any offered to date in the series of short timely topics, this time featured on a new Michigan Online Instagram page.

“The intersection between art and technology has been long established, said John Pasquale, co-organizer of the teach-out and the Donald R. Shepherd Associate Professor of Conducting and director of the Michigan Marching and Athletic Bands.

“With current-day trends in technology, we are hoping to explore how art is consumed, created and distributed, along with the intended and unintended consequences that follow with these advancements.”

Pasquale and co-organizer Malinda Matney, director of assessment for the Center for Research on Learning and Teaching and adviser for Kappa Kappa Psi, the national honorary band fraternity, are neighbors who say casual conversation led to their collaboration on the teach-out with the Office of Academic Innovation. They point to historic events we might not think of as evidence that art and technology have gone together for centuries:

U-M has been offering the Teach-Out Series on timely topics since March 2017. Usually delivered online for several weeks, the team opted to try something different this time, said Benjamin Morse, design manager at Academic Innovation.

“As we were looking for ways to connect with broad communities of artists, educators, technologists and others, Instagram emerged as a digital space in which many of these people are already engaging with one another,” he said.

“Teach-outs are meant to be interactive learning experiences where participants can learn about, discuss and address salient social issues in their own contexts. Instagram allows our team to create unique opportunities for engagement and empowers participants to interact directly with John, Malinda and other expert contributors.”

Matney said she is excited about the deep lineup of presenters and guests for the teach-out, including School of Music, Theatre & Dance Dean David Gier, former dean Aaron Dworkin, University Musical Society President Matthew VanBeisen, and radio host and voice of Michigan Stadium, Carl Grapentine, as well as other faculty and local artists.

One benefit of doing the Instagram takeover, she said, is the hosts can take advantage of the immediacy of the format, and, for example, go to the Ann Arbor Art Fairs to talk with artists on the spot.

“I am looking forward to seeing this come to light and looking forward to working with the artists on it,” Matney said. “We hope to inspire people who think, ‘I wonder if I could create something?’ People who would like to engage with the arts but don’t know how to get started. We also hope to engage the more seasoned artistic community—encourage them to share their practice and think more about this intersection.”