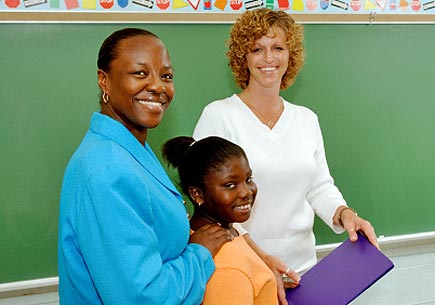 ANN ARBOR—Teachers and parents matter more than peers in keeping adolescents engaged in school, according to a new study that counters the widespread belief that peers matter most in the lives of adolescents.

“We were surprised to find that most adolescents continue to be influenced greatly by their teachers and parents when it comes to school engagement,” said Ming-Te Wang, the lead author of the study and a faculty research fellow at University of Michigan Institute for Social Research.

“Even though this is a stage when young people are moving toward establishing autonomy and independence, teachers and parents remain important in helping them stay involved in school, and in extracurricular activities. And this is true for all ethnic groups and races, and across all the economic groups we studied.”

For the study, which was published in the current issue of the peer-reviewed journal Child Development, Wang and co-author Jacquelynne Eccles analyzed longitudinal data on nearly 1,500 teens from 23 schools in the Washington, D.C., area. Students were interviewed in 7th, 9th and 11th grades, with researchers asking about four indicators of student engagement: compliance with school rules, participation in extracurricular activities, identification with one’s school and value placed on education.

The researchers also asked about the support students received from teachers, parents and peers, and assessed school records and other information.

The analysis was funded by the Spencer Foundation. The data are part of the U-M Maryland Adolescent Development in Context Study, also known as the Prince George’s County Family Study, funded by the John D. and Catherine T. MacArthur Foundation and by the National Institutes of Health.

As the researchers predicted, school engagement declined from 7th to 11th grade, more steeply among boys than among girls.

“The overall declines may result from a mismatch between the student’s developmental stage and the secondary school environment,” Wang said. “In comparison to elementary schools, middle and high schools are larger, more departmentalized and more performance-oriented.

“This results in fewer opportunities for teachers and students to develop strong personal relationships, and fewer chances for students to participate in extracurricular activities at a time when they need relationships with adults outside their families to feel competent in their school work.”

The greater engagement of girls may be a result of gender socialization and differential expectations of parents and teachers, according to Eccles.

“For instance, parents tend to monitor girls’ progress more closely, correct girls’ mistakes and make decisions for girls more than they do for boys,” she said. “These practices may communicate to girls, more so than to boys, the importance of regulating progress toward one’s goals and meeting those goals.

“Teachers also tend to respond differently to boys and girls in the classroom, in ways that may lead students to believe that certain behavior patterns associated with their gender are expected by their teachers.”

For both boys and girls, the researchers found that social support from adults, particularly from teachers—in the form of encouraging engagement in school, emphasizing the value of an education and facilitating participation in extracurricular activities—could counteract the negative influence of peers. They also found that peers were just as likely to exert a positive rather than a negative influence on teen school engagement.

“Adolescence is a period when relationships with adults who aren’t your parents become increasingly important,” Wang said. “Our results suggest that supportive teachers play a particularly important role in keeping teens engaged in school.”