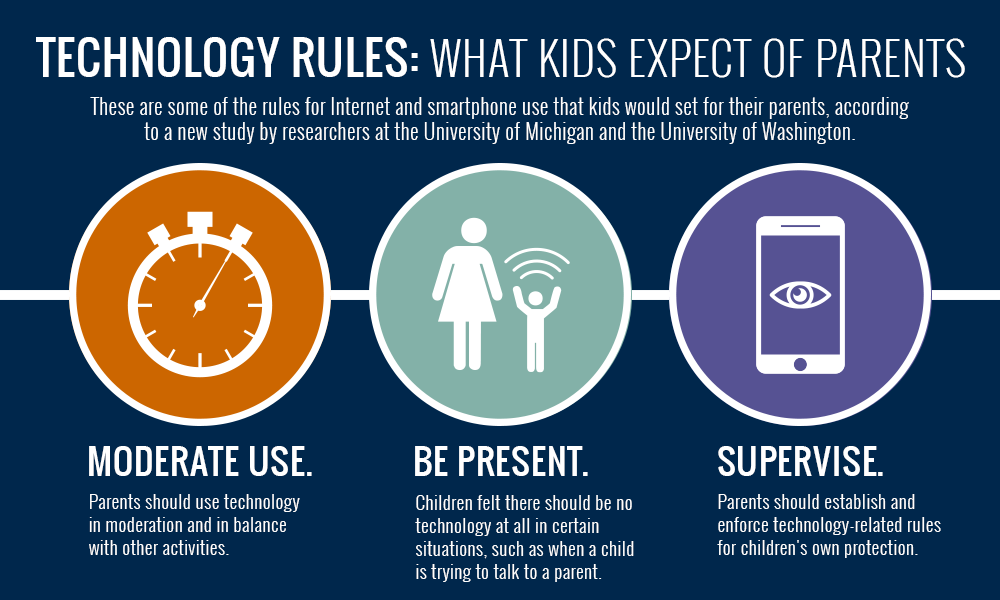 ANN ARBOR—Put your phone away when I’m talking to you. Don’t text while you’re driving—not even at red lights. Stop posting photos of me without my permission.

The researchers surveyed 249 families with children between the ages of 10 and 17. They asked about their household’s most important technology rules and expectations, as well as what made those rules easier or harder to follow. The study is among the first to explore children’s expectations for parents’ technology use.

In addition to revealing kids’ feelings about fairness and “oversharing,” it also sheds light on the most effective types of technology rules, and families’ most common approaches. The study will be presented March 2 at the Association for Computing Machinery’s conference on Computer-Supported Cooperative Work and Social Computing in San Francisco.

“Managing kids’ technology use was once much easier for parents. They switched off the television when a show was over or kept an eye on kids as they used the family computer in the living room,” said lead author Alexis Hiniker, a University of Washington doctoral student in Human Centered Design and Engineering. “But now that so many family members have phones with them at all times, it’s become harder and harder to set those boundaries.”

When researchers asked kids what technology rules they wished their parents would follow—an uncommon line of inquiry—the answers fell into seven general categories:

“Twice as many children as parents expressed concerns about family members oversharing personal information about them on Facebook and other social media without permission,” said Sarita Schoenebeck, assistant professor at the University of Michigan School of Information. “Many children said they found that content embarrassing and felt frustrated when their parents continued to do it.”

The study also examined which types of household rules were more or less difficult to enforce. Families reported that rules prohibiting certain technology or social media uses entirely were easier to follow and enforce than rules aiming to prevent technology use only in certain situations. So an outright ban on Snapchat or a particular video game was more effective than, say, forbidding phone use during church or texting with friends after a certain time in the evening.

“We were surprised to find that when mom and dad say, ‘You can’t be on Instagram,’ it’s easier for kids to accept and stick to that rule than when they say, ‘You can be on Instagram but you have to put it away at dinner,'” Hiniker said. “As a teenager, I think I would have been happier in a world where I got to be on Instagram at least some of the time, but that really seemed to be a struggle for families.”

The most common expectation cited by children revolved around “being present” in certain social settings, such as when a family member was talking or during meals or when they were involved in certain activities. Parents, on the other hand, tended to prioritize privacy rules to prevent children from putting themselves at risk by disclosing personal information online.

Most of the nearly 500 different technology rules reported by families fell into one of a dozen categories, which included:

While parents tended not to be concerned about different rules for parents and children, many kids saw that as hypocritical. Children also found it easier to follow household technology rules when families had developed them collectively and when parents lived by them as well.

The fact that both children and parents reported so much difficulty with rules that require family members to simply put their phones down in certain circumstances points to missed opportunities for app and device designers to recognize those consumer needs, the researchers said.

Technical fixes to help users find more balance might include a “family time” button that disables notifications for 30 minutes, news feeds that provide opportunities to digest content in smaller chunks, and video streaming that doesn’t automatically start playing a new episode once the last one stops.

The research suggests that if parents find that a particular app or social media site is too difficult for their kids to disengage from, the simpler solution is to make it off-limits.

“If app and device designers were more open to fostering healthy technology habits, they probably would make their current customers happier,” said Julie Kientz, University of Washington associate professor of Human Centered Design and Engineering. “And they might bring in more families who’ve decided the rule is not to use it at all.”

The research was funded by the National Science Foundation, grant number HCC-1318143. The study is titled “Not at the Dinner Table: Parents’ and Children’s Perspectives on Family Technology Rules.”