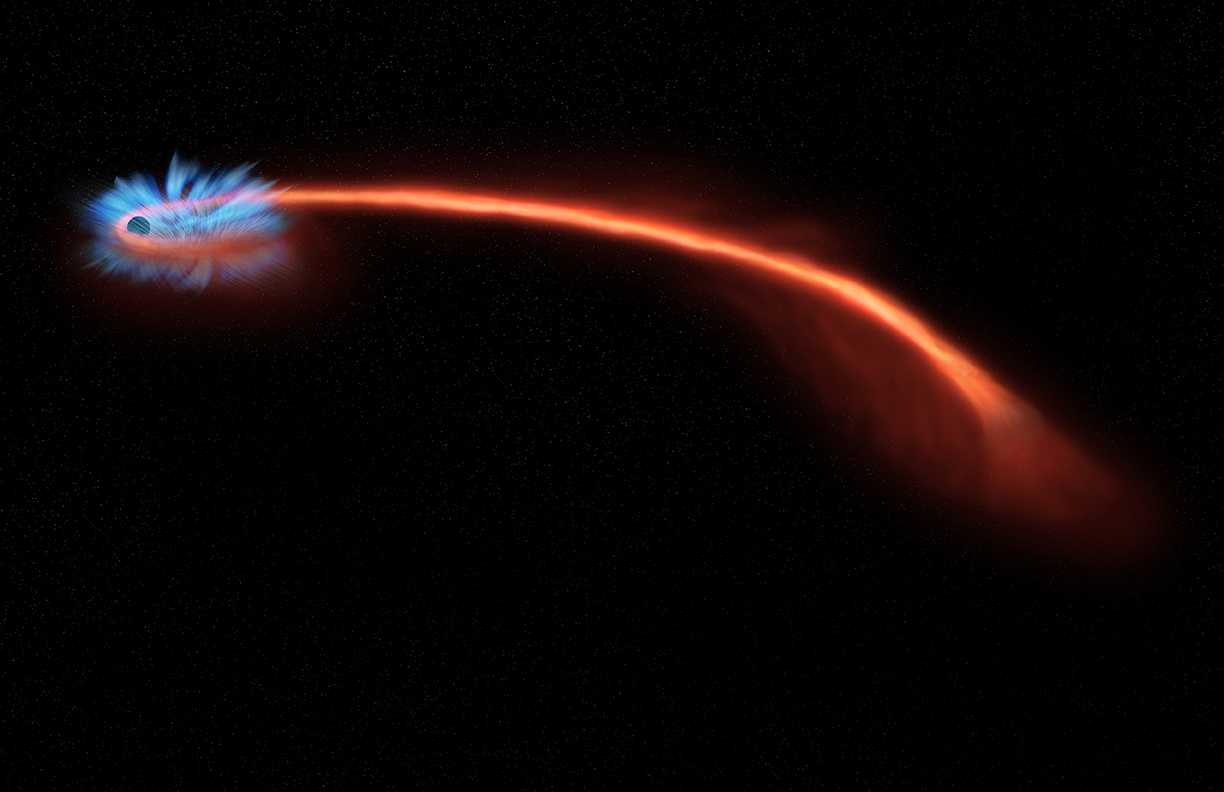 Astronomers have observed material being blown away from a black hole after it tore a star apart. Credit: NASA/CXC/U. Michigan/J. Miller et al.; Illustration: NASA/CXC/M. WeissANN ARBOR—A black hole tore apart a star that got too close and a trio of orbiting X-ray telescopes captured the action. This closest “tidal disruption” discovered in a decade is giving astronomers new insights into the extreme environment around black holes, and how they swallow stars.

“This time we caught the real heart of the action and saw entirely new things,” said Jon M. Miller, professor of astronomy in the College of Literature, Science, and the Arts at the University of Michigan and lead author of a study describing the event in Nature. “This one is the best chance we have had so far to really understand what happens when a black hole shreds a star.”

Black holes are ultra-dense astronomical objects with such intense gravitational pull that not even light can escape them. Supermassive black holes lurk at the centers of galaxies and smaller ones are the collapsed remains of the most massive stars.

The culprit in this case is a supermassive black hole at the core of the galaxy PGC 043234, about 290 million light years from Earth in the constellation Coma Berenices. The black hole’s mass is estimated to be a few million times that of the Sun.

To put together a picture of what happened at this event that’s been named ASASSN-14li, researchers combined observations from NASA’s Chandra X-ray Observatory and Swift Gamma Ray Explorer, and ESA’s XMM-Newton orbiting telescopes.

When a star comes too close to a black hole, its gravity can rip the star apart. Astronomers refer to these events as “tidal disruptions” because gravity from the black hole changes so much between the near and far sides of the star, that it cannot hold itself together. Some of the stellar debris is flung outward at high speeds. The flying debris causes a distinct X-ray flare that can last for a few years, according NASA and ESA.

After the star is destroyed, the black hole pulls most of the remains of the star toward it. This infalling debris is heated to millions of degrees and generates a huge amount of X-ray light. Soon after this surge of X-rays, the amount of light decreases as the material falls beyond the event horizon (that is, the point of no return) of the black hole.

Gas often falls towards black holes by spiraling inward in a disk. But how this process starts has remained a mystery. In ASASSN-14li, astronomers were able to witness the formation of such a disk by looking at the X-ray light at different wavelengths and how that changed over time.

The researchers determined that the X-rays being produced come from material that is either very close to or is actually in the smallest possible stable orbit around the black hole.

“The black hole tears the star apart and starts swallowing material really quickly, but that’s not the end of the story,” said co-author Jelle Kaastra of the Institute for Space Research in the Netherlands. “The black hole can’t keep up that pace so it expels some of the material outwards.”

The X-ray data reveal the presence of a wind moving away from the black hole. The wind is not moving fast enough to escape the black hole’s gravitational grasp. The relatively low speed for the wind may be explained by gas from the disrupted star that’s following an elliptical orbit in a newly formed disk around the black hole.

“These results support some of our newest ideas for the structure and evolution of tidal disruption events,” said Cole Miller, a co-author from the University of Maryland. “In the future, tidal disruptions can provide us with laboratories to study the effects of extreme gravity.”

Astronomers are hoping to find more events like ASASSN-14li, which they can use to continue to test theoretical models about how black holes affect their environments and anything that might wander too close.

“We all feel gravity and everyone has done little experiments, even just throwing a ball, to explore how it works. Black holes make us aware that some places in the universe twist the familiar into the extraordinary. I think this is the root of our fascination with black holes,” said lead author Jon Miller.

These results appear in the Oct. 22 issue of the journal Nature. The paper is titled, “Flows of X-ray gas reveal the disruption of a star by a massive black hole.”