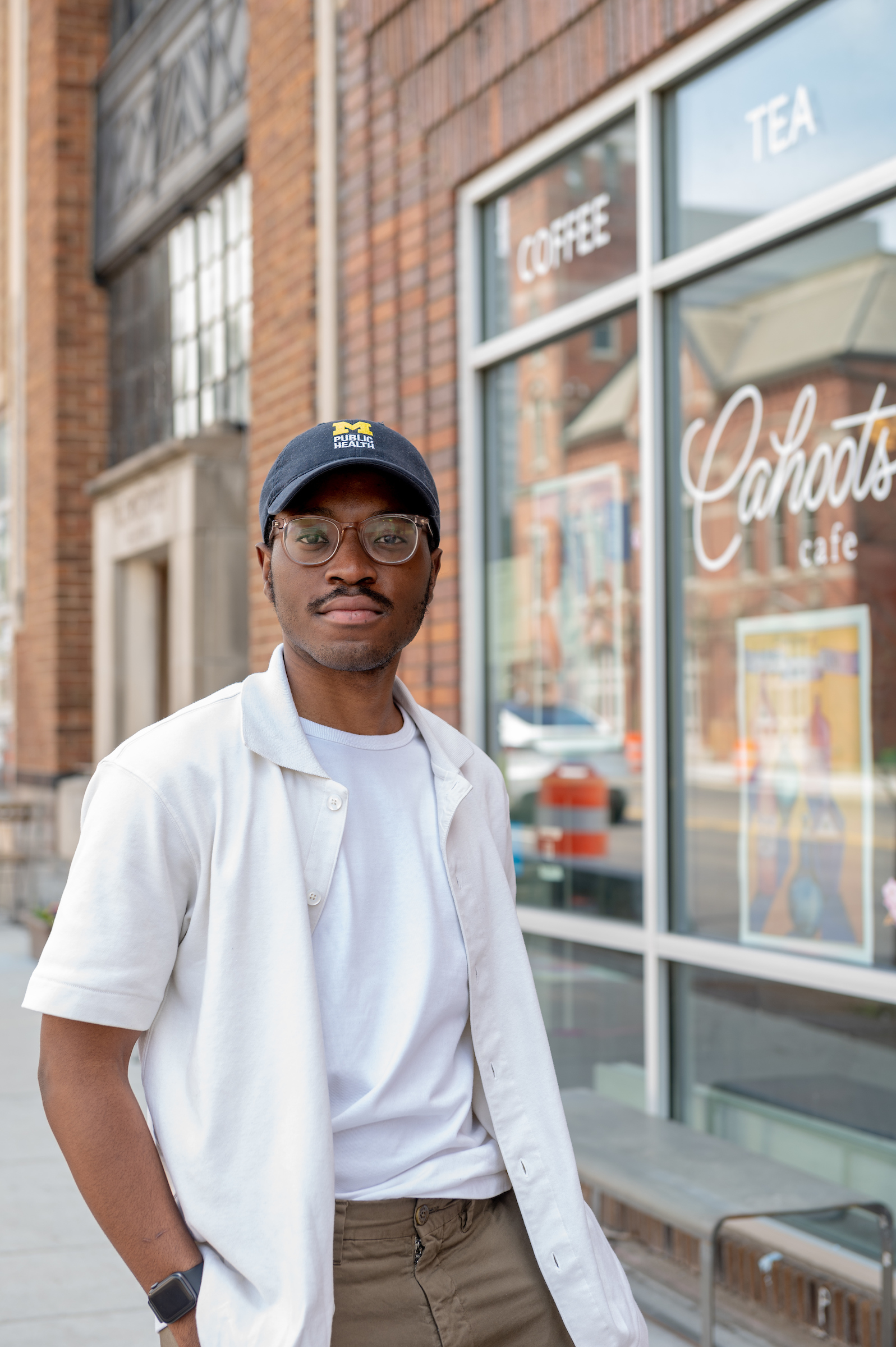 Tanaka Chavanduka was inspired to reconsider his communication methods after a trip to a national conference on HIV in Washington, D.C. While there, he also visited the National Portrait Gallery and the National Museum of African American History and Culture.

“I’m often exposed to the emotions, sadness and healing behind the numbers—and my experience on this trip made it clear that traditional ways of sharing research aren’t designed to express emotion in the same way art is,” said Chavanduka, project manager at the University of Michigan Center for Sexuality and Health Disparities.

“If our work as researchers took up space in the same way art does, that could help the people we work with feel seen. We expect communities to be vulnerable with us when participating in research, so why not also create a pipeline for creatives who exist in those communities to process that vulnerability and share it in a way that’s respectful, disarming and accessible?”

This question inspired him to organize a new community art exhibition to explore what happens when science prioritizes empathy. In addition to highlighting queer experiences, his goal was to help individuals rethink how art can transform communities, generate healing and share knowledge.

The exhibition, “The Art of Queer Health Sciences,” will be on view on the windows of several downtown Ann Arbor businesses until May 5. Locations include Cahoots, Abracadabra, Vault of Midnight, Vinology, Thrive Juicery, Avalon Cafe, Bløm Meadworks and Zingerman’s Greyline.

The project was funded by the U-M Arts Initiative as part of their “exploration pilot grants” awarded in September 2020.

The artwork included in the exhibition aims to communicate research findings from the Center for Sexuality and Health Disparities, whose mission is to improve sexual and reproductive health and reduce health disparities in marginalized communities—with a specific focus on sexual and gender minorities.

“Traditionally, this type of research makes its way into the world via academic journals and conference presentations—so the information that is most valuable to marginalized communities doesn’t always make it to those communities,” Chavanduka said.

The artists were challenged to create artwork based on four research projects chosen by CSHD faculty. Chavanduka and Pitter then facilitated several workshops in which the students and researchers came together to learn more about each other’s work and practices.

Michelle Munro-Kramer, assistant professor of nursing, worked with student artist Noe Conahan to present her research on the dynamics of power and control tactics among college students.

Through interviews with students, 13 categories of maintaining power and control in a relationship, such as emotional abuse or using privilege/identities, were revealed. The students saw these different forms of power and control as distinct puzzle pieces—which are represented in Conahan’s artwork—that come together in unique ways depending on the individual relationship.

“The highlight for me has really been in seeing how others interpret my research. I’m very focused on practical results, but I don’t always have the opportunity to talk with others about how they understand and see my work,” Munro-Kramer said. “Working with artists allowed me to really see this and encouraged me to be more creative in the way I disseminate my work so that it is accessible to different populations and learners.”

Akshay Sharma, assistant professor of nursing, researched the acceptability and feasibility of self-collecting biological specimens for HIV and other sexually transmitted infections, specifically among gay, bisexual, and other men who have sex with men. Sharma worked with student artist Shalin Berman. 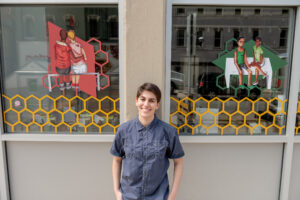 “Collaborating with Shalin enlightened me on how a talented artist can bring emotions to life,” Sharma said. “What I found most surprising is how beautifully they captured and conveyed the spirit of a moment that was being experienced by a participant—such as feeling empowered or overwhelmed—despite Shalin’s limited engagement during the actual conduct of the study.”

Other pairings included Rob Stephenson, professor of nursing and CSHD director, who worked with student artist Jenna John to interpret research related to an intervention he created called Stronger Together for serodiscordant male couples (one is HIV positive, one is HIV negative) that focuses on teaching them to work together toward common goals. 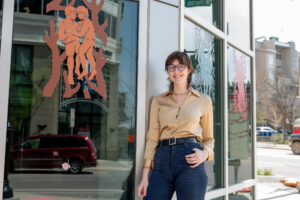 Jenna John, a dual major in art and design and ecology and evolutionary biology at the University of Michigan, poses in front of her installation at Zingerman’s Greyline in downtown Ann Arbor. John’s work is part of “The art of queer health sciences,” an exhibition on view at several downtown Ann Arbor businesses and at queeringart.com. Image credit: Eric Bronson/Michigan Photography.

“For my project, I talked to Dr. Stephenson a lot about the narratives surrounding the relationships of gay and bisexual men, and I was really inspired by symbiosis and mutualism in nature,” said John, who dual majors in art & design and ecology and evolutionary biology. “The lichen and coral species, which you can see in my artwork, are symbiotic because they exist together, much like two males in a relationship working toward a shared vision that depends on mutual support—they both make each other healthier.”

Sarah Peitzmeier, assistant professor of nursing, also worked with student artist Coyne Gatto to interpret her study that aims to understand what sexual violence against transgender and nonbinary college undergraduates looks like. The study will be used to create an intervention designed to prevent unwanted sexual experiences and sexual assault specifically for trans and nonbinary undergraduates. 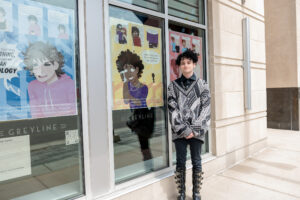 Coyne Gatto, University of Michigan Stamps School of Art & Design student, poses in front of his work at Zingerman’s Greyline. Gatto’s work is part of “The art of queer health sciences,” an exhibition on view at several downtown Ann Arbor businesses and at queeringart.com. Image credit: Eric Bronson/Michigan Photography.

“We are hoping this project will help to start to bridge the gap between science and art, particularly in the area of social sciences,” Pitter said. “I have very much enjoyed watching the relationship between faculty and students and being engaged myself in the creative process with students.”

Chavanduka and Pitter hope this project will inspire other scientists and researchers to think about how science can drive empathy and knowledge by engaging with art. And with greater collaboration between researchers and artists, both groups will have the chance to share their work in spaces with audiences they may not have been able to reach otherwise.