The buzz about cicadas: Noisy bugs to emerge after 17 years underground 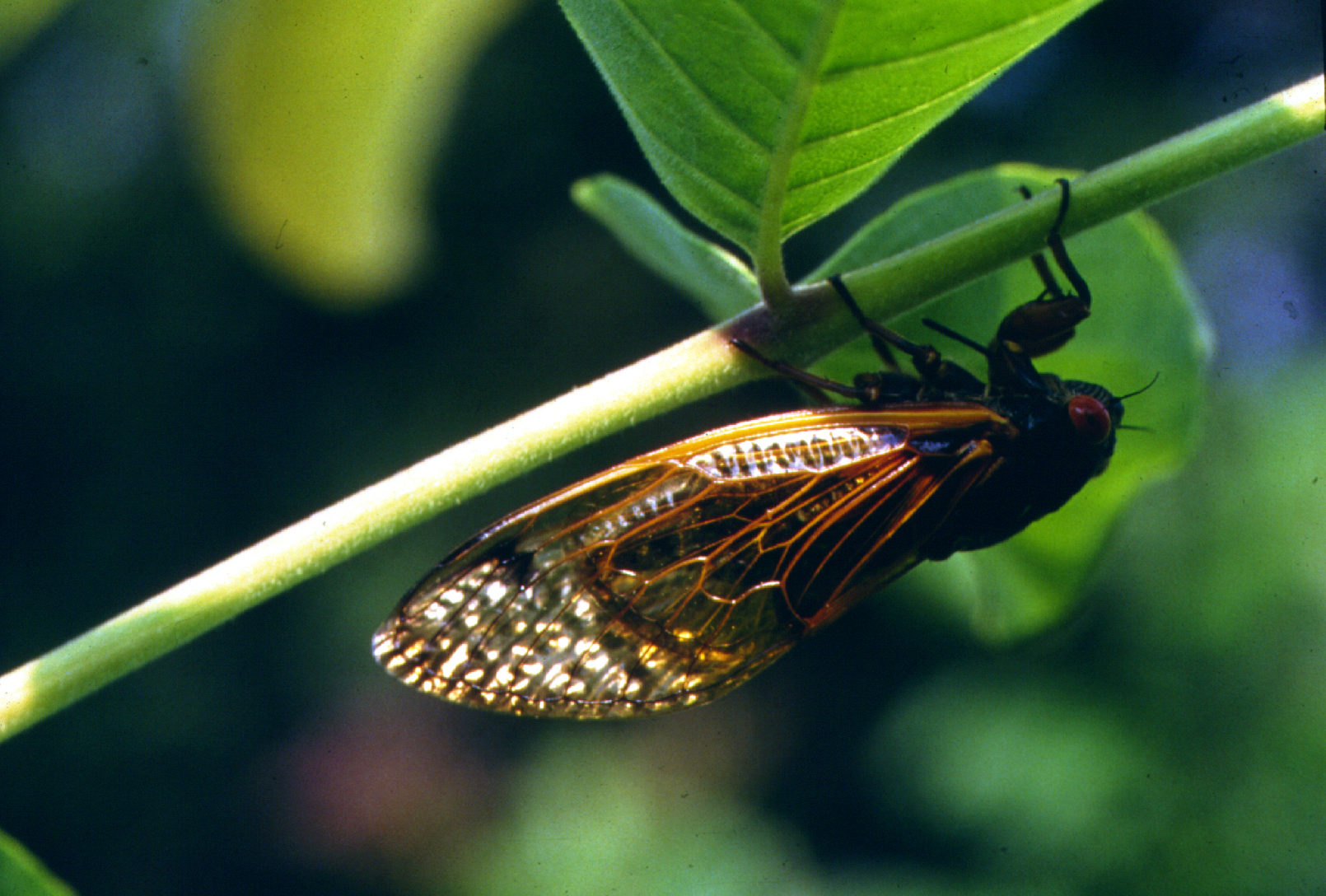 Bug-eyed and buzzing, hordes of periodical cicadas are about to appear in Michigan and a handful of other states. After developing underground for 17 years, the harmless but noisy insects will emerge by the millions in May and June.

The adults will spend about six weeks engaged in raucous reproductive behavior, and then they’ll be gone, leaving millions of tiny offspring behind to burrow into the soil and start the 17-year cycle all over again. This dramatic phenomenon occurs only in the eastern United States.

The mass emergences have fascinated University of Michigan professor emeritus Thomas Moore for half a century—ever since he first witnessed this particular brood of bugs arising en masse in 1953. He’s so attuned to their choruses, he can estimate their numbers and stage of courtship as he drives through an emergence area with his car windows down. And after studying them so long, he’s the go-to guy for anything you’d ever want to know about cicadas—both the 17-year kind and those that stay underground for shorter periods.

The reddish orange-and-black insects that will blanket trees and shrubs in May and June belong to Brood X (10) of periodical cicadas, explained Moore. A different brood of periodical cicadas emerges somewhere in the country most years, but Brood X is the largest, with a patchwork distribution that ranges from Long Island, New York south to Georgia, north to Michigan and west to Illinois.

The critters have the longest adult-to-adult cycle of any animal known, taking the full 17 years to mature from ant-sized nymph to peanut-sized adult. During their years of subterranean seclusion, the juvenile forms suck juices from small roots, shedding their skins four times as they grow. When their time in the sun finally comes, the nymphs tunnel to the surface and wait for the soil to warm to about 64 degrees F. before venturing out. “They’re amazingly synchronized,” with hundreds of thousands to more than a million per acre appearing almost simultaneously at night in some areas, said Moore. 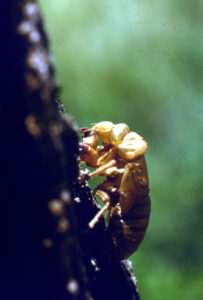 After hauling themselves out of the ground and using their clawed front legs to climb up tree trunks, the nymphs balloon out of their skins one last time to become adults. Their ghostly shed skins, looking a little like fried pork rinds with legs, are often found clinging to tree trunks or scattered on the ground. Within a day or two, the adult males begin their cacophonous chorusing, producing sound by vibrating abdominal drums called timbals. At 100 decibels or more at a distance of one inch, the racket is among nature’s loudest sounds, rivaling a jet airplane at takeoff.

Moore studied cicada sound production and perception, using high-speed 16 mm movie cameras, threadlike electrodes and acoustical equipment, for a while in the 1980s. But that technique required intense light, which tended to make the cicadas sizzle instead of sing. “We found out a fair amount about the way in which timbals work, but we had a lot of frustrations,” he recalled. In other research, two former U-M graduate students discovered that female periodical cicadas, which don’t produce timbal sounds, use wing-flick signals to communicate with males.

The sudden flush of insects is a feast for wildlife. “Everything that can eat them, will,” Moore said. That includes fishes, birds, squirrels, chipmunks, raccoons, foxes, skunks, many other insects—and, on occasion, Moore, who says they taste like popcorn when fried in butter. Other aficionados compare the flavor to Swiss cheese, pistachios or potatoes.

Females that avoid being eaten long enough to mate and lay eggs deposit hundreds of them in twigs about as big around as pencils. Unlike the larger, greenish dog-day cicadas that come out later in summer, 17-year cicadas spurn dead wood and lay only in living twigs. An abundance of eggs can cause the branch tips to break and terminal leaves to die, but that usually doesn’t hurt healthy, mature trees. (Small trees and shrubs can be protected by draping them with cheesecloth or light screening.) 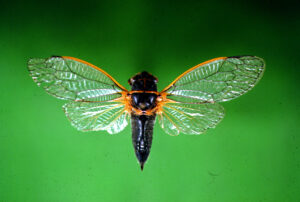 Overall, cicadas may be good for forests, which may experience a growth spurt the year after an emergence, Moore noted. “The emergence holes allow sunlight, air, water and nutrients to penetrate more rapidly and to greater depths into the soil than typically.” Indeed, the very presence of cicadas is a sign of a robust forest, he added.

As for their effects on people, there’s nothing to fear. Though a few freak incidents have been reported—cicadas accidentally flying into yawning mouths or kids trying to bat bugs on the wing and hitting each other instead—the docile insects don’t bite or sting. So just sit back and enjoy their early summer show, and if you happen to miss it, don’t despair. It’s not a once-in-a-lifetime thing like catching a glimpse of Halley’s comet; Brood XIII, which last appeared in 1990, is scheduled to surface in parts of Illinois, Indiana, Iowa and Wisconsin a mere three years from now, and Brood X will rise again in 2021.

• If the human life cycle followed the same pattern as the 17-year cicada’s, we’d have a 102-year childhood followed by a one-year adulthood.

• The first record of 17-year cicadas appeared in a book published in 1669, describing an emergence that probably occurred in 1651. Reminded of Biblical grasshopper plagues, Pilgrims called cicadas “locusts,” a misnomer that persists today.

• During the Civil War, Union soldiers held at the Andersonville, Ga., Confederate military prison relied on cicada choruses to mask the sounds of prison breaks.

• The W-shaped mark near the outer edge of 17-year cicadas’ front wings prompted the superstitious belief that the insects foretell war.

• Recordings of cicada songs, rather than specimens of the insects themselves, are more useful in telling the species apart.

• For many cicadas, only males sing. This led the Greek poet Xenarchus to write, “Happy are cicadas’ lives, for they have only voiceless wives.”

• Male cicadas have three kinds of songs: calling choruses attract females and other males to the aggregating area; softer, complex courtship songs are produced just before mating, and disturbance squawks are used when cicadas are approached rapidly or grasped.

• Cicada songs may sound strange and grating to our ears because they’re at ranges we’re not accustomed to hearing in music or human voices.