The circadian clock is like an orchestra with many conductors 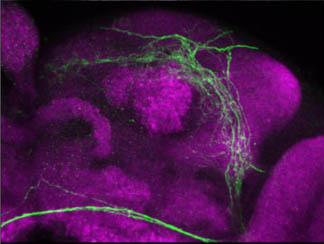 A fly brain (the shape of which is shown in magenta) with green fluorescent protein expressed in clock neuron projections.ANN ARBOR—You’ve switched to the night shift and your weight skyrockets, or you wake at 7 a.m. on weekdays but sleep until noon on weekends—a social jet lag that can fog your Saturday and Sunday.

Life runs on rhythms driven by circadian clocks, and disruption of these cycles is associated with serious physical and emotional problems, says Orie Shafer, a University of Michigan assistant professor of molecular, cellular and developmental biology.

Now, new findings from Shafer and U-M doctoral student Zepeng Yao challenge the prevailing wisdom about how our body clocks are organized, and suggest that interactions among neurons that govern circadian rhythms are more complex than originally thought. 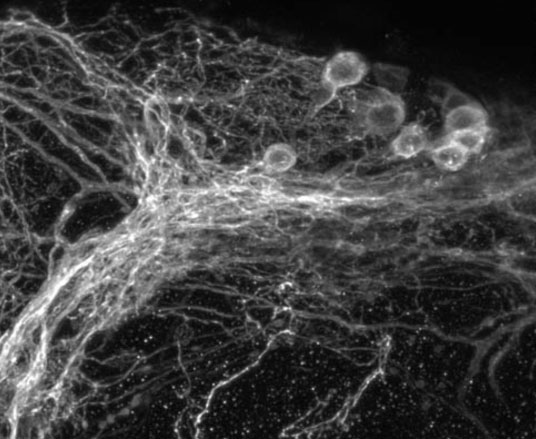 Clock neurons in a small region of the fly brain.Interactions among clock neurons determine the strength and speed of circadian rhythms, Yao says. So, when researchers genetically changed the clock speeds of only the group of eight master pacemakers they could examine how well the conductor alone governed the orchestra. They found that without the environmental cues, the orchestra didn’t follow the conductor as closely as previously thought.

Some of the fruit flies completely lost sense of time, and others simultaneously demonstrated two different sleep cycles, one following the group of eight neurons and the other following some other set of neurons.

“The finding shows that instead of the entire orchestra following a single conductor, part of the orchestra is following a different conductor or not listening at all,” Shafer said.

The findings suggest that instead of a group of master pacemaker neurons, the clock network consists of many independent clocks, each of which drives rhythms in activity. Shafer and Yao suspect that a similar organization will be found in mammals, as well.

“A better understanding of the circadian clock mechanisms will be critical for attempts to alleviate the adverse effects associated with circadian disorders,” Yao said.

For a copy of the study, which appears March 28 in the journal Science, contact scipak@aaas.org.