The gift of bonsai: An exhibition of living art

ANN ARBOR—University of Michigan alumnus Melvyn Goldstein began his bonsai hobby back in 1995. Since then, he’s amassed more than 100 miniature trees that some experts say make up one of the finest private collections of its kind in North America.

After donating three trees to U-M in 2015, Goldstein recently announced that the gift was the first wave of his collection, which he plans to donate in its entirety to U-M’s Matthaei Botanical Gardens over the next several years.

Already having collaborated with Matthaei for the exhibition of his trees in the past, Goldstein said that their commitment to the care and art of bonsai is a major reason that he decided to give them his collection.

“Keeping in mind that most trees can live for hundreds of years, my Japanese azalea teacher always emphasized that we don’t own trees,” he said. “Rather, we are just ‘leasing’ them until we pass them on to others who will continue looking after them.”

U-M, Mongolia, Tibet and beyond 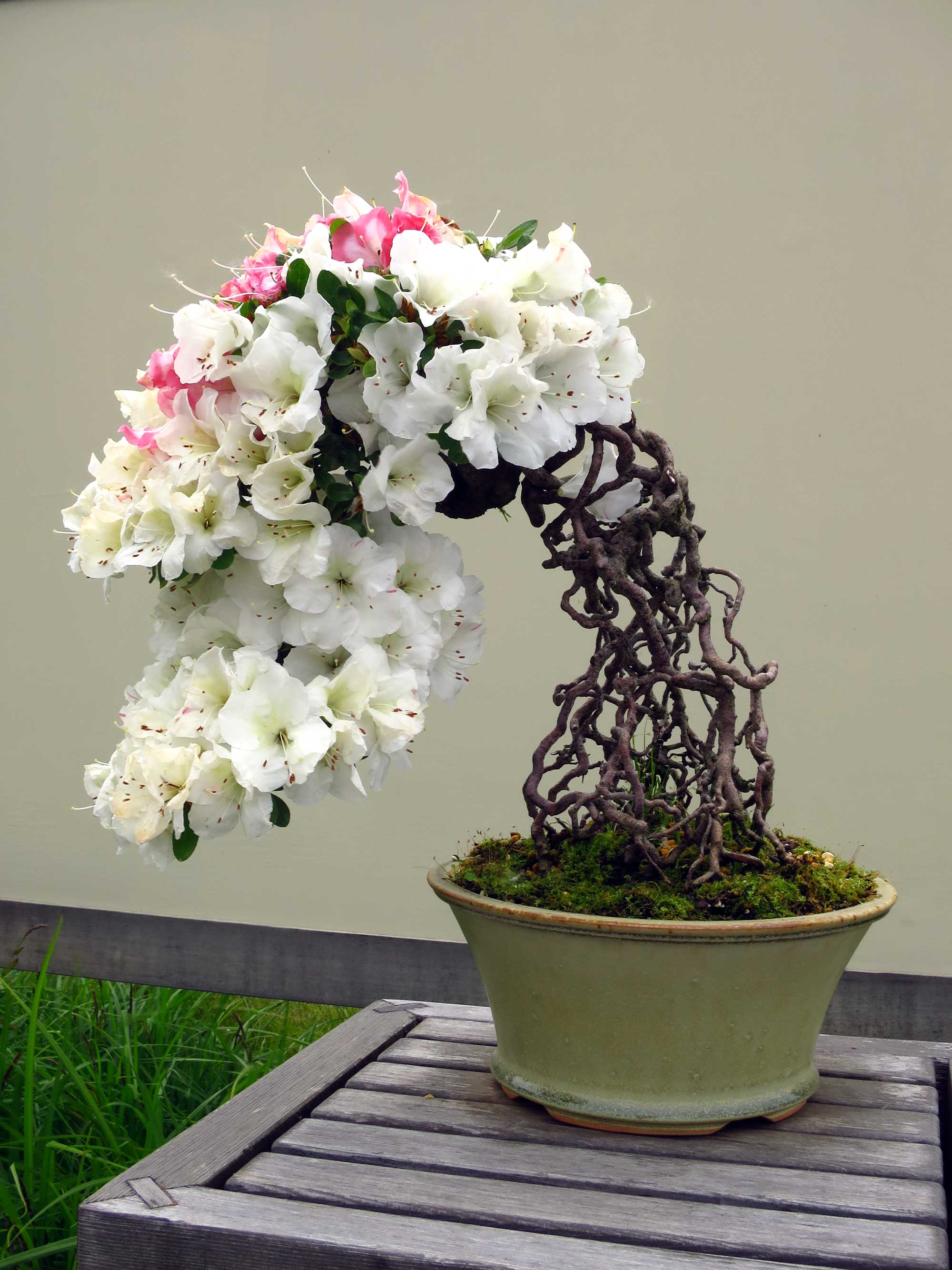 Azalea bonsai from Mel Goldstein’s private collection. Image credit: Michele Yanga, Courtesy U-M Matthaei Botanical GardensGoldstein is a well-known social anthropologist, Tibetan scholar, professor at Case Western Reserve University and member of the National Academy of Sciences. He often attributes his interest in the ancient art form of bonsai to his years at U-M, where he received a bachelor’s degree in 1959 and a master’s degree in 1960.

“Though you may not understand the immediate connection, the late U-M Professor Andrei Lobanov Rostovsky instilled in me a love of history that has guided me through my studies in Russia, Mongolia and, ultimately, Tibet,” he said.

When Lobanov Rostovsky retired in 1960, he arranged for Goldstein to study under a famous Russian émigré scholar at the University of Washington until the U-M history department found his replacement.

In a twist of fate, the year that he arrived in Seattle was also the year after the Dalai Lama had fled Tibet after a failed uprising. Consequently, the Rockefeller Foundation started a new program to train scholars in the West to study Tibet in order to preserve its cultural history and religious traditions. At that time, one of their new centers went to U-W, where Goldstein took up Tibetan studies and went on to receive his Ph.D. in 1968.

When China opened its doors to the outside world, he was able to get permission to start fieldwork in Tibet and came into contact with his first bonsai in the gardens of the hotels while staying at in Beijing and Chengdu (in Sichuan).

Taking a serious interest, he bought his initial trees in China in 1995, brought them back to the U.S. and began to study the intricacies of bonsai care by taking lessons from experts in the field.

“My passion for bonsai—particularly Satsuki azalea—is an outgrowth of this story,” Goldstein said. “It is particularly meaningful to me that I’ve reconnected with U-M since it was Professor Lobanov-Rostovsky’s retirement in 1960 that ultimately led me to my two great passions: bonsai and Tibetan history.”

A lifetime of living art 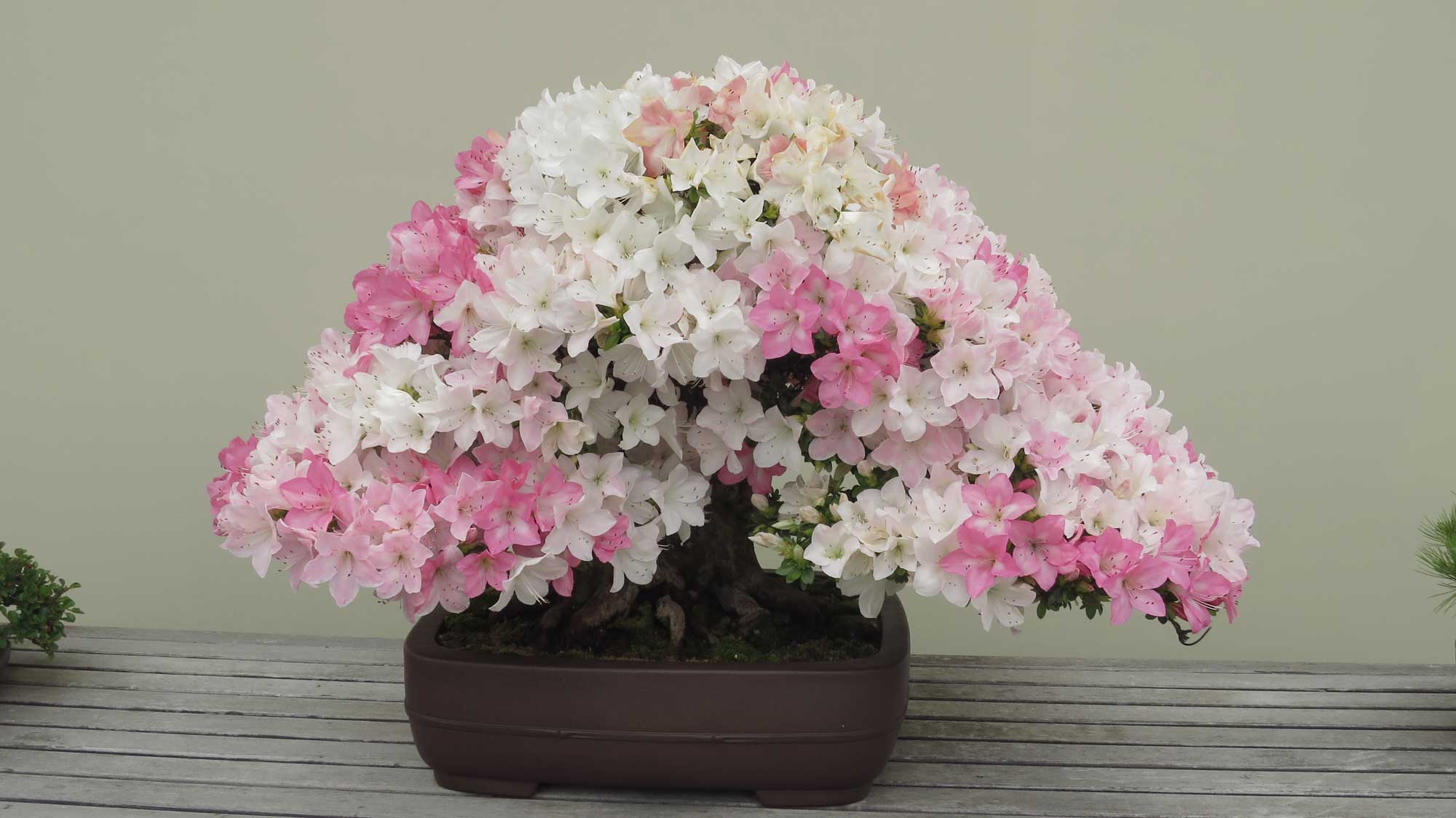 Bonsai is a patient art and a long-time practice. Like their full-size cousins, bonsai often exist on a time-scale beyond a single human life. The best trees may take decades to reach an apogee of refinement and even then, as living works of art, they constantly change.

“It’s not like a painting that you finish and hang up on the wall,” he said. “What I like about bonsai is the challenge—you can shape, re-work, start over—you’re never finished and it can always look more beautiful.”

Of Goldstein’s 110 trees, nearly half are Satsuki azalea trees, or “Satsky” as they are often called. Meaning “5th lunar month” in Japanese, their name coincides with the time of year that Satsuki azalea trees generally flower, around the last week of May and the first week in June.

Satsuki bonsai are popular in Japan (and now worldwide) not only because they exhibit an amazing range of beautiful flowers for about a month, but they also can be trained to have elegant shapes.

Some varieties, including some of his trees that will be on view at Matthaei over the next two weeks, have flowers of one color, but most have different color flowers on the same tree, and many flowers are themselves multi-colored. Also, as evergreens, their striking shapes can be appreciated all year long.

Several Satsuki azaleas from Mel Goldstein’s collection will travel to Ann Arbor May 28-June 5 during their peak bloom. The Matthaei Botanical Gardens’ “Bonsai and Penjing Garden” is free and open to the public 8 a.m.-10 p.m. daily.