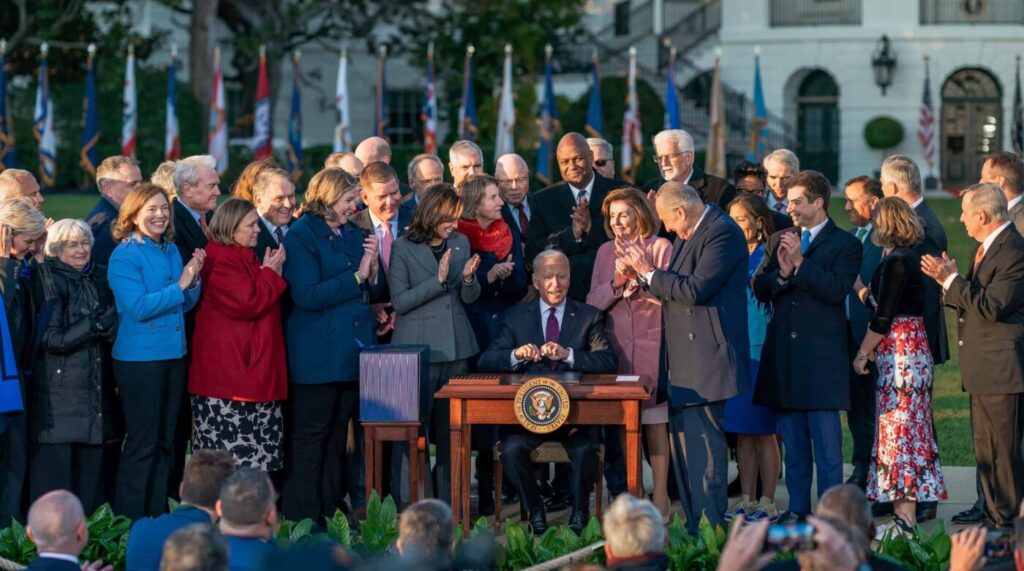 After months of haggling and horse-trading, Congress has passed—and President Joe Biden is poised to sign—a more than $1 trillion infrastructure bill. The law will usher in long-sought investment in roads, rail, bridges, broadband, the power grid and clean, safe water.

The plan is far more modest than originally intended, as is common with bipartisan legislation, but still historic in terms of its aims and reach.

University of Michigan experts are available to discuss.

Nirupama Rao is an assistant professor of business economics and public policy at U-M’s Ross School of Business. She researches economic effects of fiscal policy, focusing on its impact on firm production, investment and pricing decisions. Rao can talk about the plan in general and what it will mean for the economy.

​​”The recently passed infrastructure bill boosts the productive capacity of the nation, makes it cheaper to move goods from manufacturers and ports to purchasers, and finally begins to ready our transport and power systems for a warming world,” she said. “Renewable energy is no longer a goal of the future—it is the reality of our highways, homes and main streets. Congress is finally allowing our systems to catch up with our consumers. These investments in physical capital will boost growth; pairing them with investments in workers and their children will harness the economy’s full potential.”

Barry Rabe is a professor of public and environmental policy at U-M’s Ford School of Public Policy. He examines the political feasibility and durability of environmental and energy policy, with a focus on efforts to deal with climate change in the United States and other nations.

“The passage of federal infrastructure legislation represents the achievement of a long-discussed legislative goal,” he said. “But it is only the beginning of a process to convert new spending into actual infrastructure, ranging from new highways and bridges to updated water lines and electric vehicle charging networks. We should not assume that agreeing to expanded budgets automatically assures full and timely implementation.”

Betsey Stevenson, a professor of public policy and economics at U-M’s Ford School of Public Policy, was a member of the Council of Economic Advisers from 2013-15, where she advised President Barack Obama on social policy, labor markets and trade. She also was the chief economist of the U.S. Department of Labor from 2010-11.

“The bipartisan infrastructure package passed by Congress will provide America with historic investment in critical infrastructure necessary to support human flourishing and business investment,” she said. “It will help restore America’s global competitiveness by enhancing funding for productivity boosting investments like expanding access to high speed internet, improving the roads and transportation systems and modernizing the power grid.

“It will also prepare us for the future with investments needed to address climate change. The infrastructure bill will support the shift toward cleaner energy technologies and allow American consumers to access cleaner transportation options through investments in hybrid buses and charging stations for electric vehicles.

Jennifer Read is director of the U-M Water Center and lead author on a Michigan statewide water affordability assessment (forthcoming December 2021) and the director of a major public outreach project on Michigan’s revised Lead and Copper Rule.

“The $1.3 billion for Michigan’s water infrastructure is a definite step in the right direction,” she said. “Without this influx of federal funding, we’d remain years behind in getting lead service lines replaced or see a big increase in consumer water bills to fund it.

“With that said, the state still needs to figure out how these funds will be allocated, and our work shows that there is tremendous variation among communities across the state in their technical, financial and managerial capacity to access and manage such an influx. If not addressed properly, we will see those communities most in need of resources once again left behind. The state should provide technical, financial and other forms of support to build and enhance community capacity to truly benefit from these resources.”

Richard Hall is a professor of political science at U-M’s College of Literature, Science, and the Arts and professor of public policy at the Ford School. His research focuses on American national politics. He has studied participation and representation in Congress, campaign finance reform, legislative oversight, and lobbying in Congress.

“Passing the infrastructure bill provided President Biden with a significant victory,” he said. “In the 2016 campaign, Trump repeatedly promised to enact such a bill, yet even though the Republicans held solid majorities for two years, Trump could not get it done.

“Biden did so with razor thin majorities in both chambers and achieved some bipartisanship to boot.

“But by itself, I don’t think the infrastructure bill will change the narrative that Biden’s agenda is falling apart and he cannot unify his own party. In its current form, the Build Back Better bill will be a much harder sell to Joe Manchin and Kyrsten Sinema. The major concessions they will demand can only alienate progressive Democrats in the House, reopening the divisions that Pelosi managed to paper over last week. And the Democrats will be working on a much shorter time clock.”

Nancy Love, professor of civil and environmental engineering at U-M’s College of Engineering, is a licensed professional engineer with expertise in water quality engineering and design as it pertains to wastewater and drinking water systems.

“The funds provided by the infrastructure bill will have a direct and rapid impact on critical needs for Michigan’s water infrastructure,” she said. “I hope the state makes the most of this opportunity to address historic water infrastructure investment disparities while also advancing innovative water solutions that are more sustainable.”

James Sayer is director of the U-M Transportation Research Institute.

“We must not continue to neglect the many communities that already struggle with mobility for their residents. Whether it is communities of color, rural communities or those with significant socioeconomic disparities, we must ensure that all Americans benefit from the infrastructure improvements. This is an opportunity to correct some wrongs of the past and make improvements—first and foremost, for those already without adequate infrastructure.”