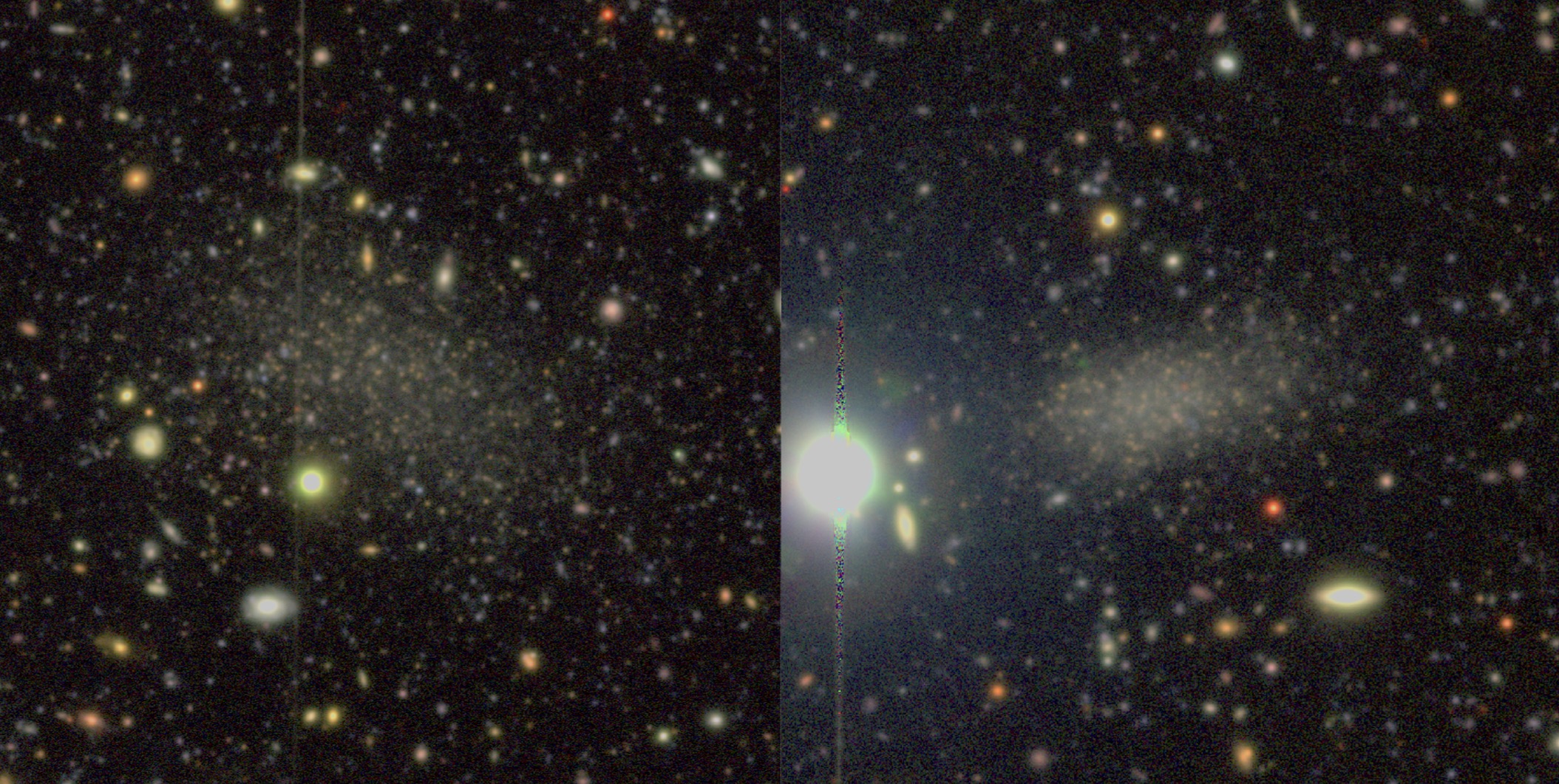 Color images of the two recently discovered satellite galaxies around M94. The images were taken with Hyper Suprime-Cam on the Subaru telescope, located at nearly 14,000 ft above sea level on the summit of Mauna Kea in Hawaii. Image credit: Smercina et al. 2018

ANN ARBOR—Long ago in a galaxy far, far away, fewer galaxies were born than expected—and that could create new questions for galaxy physics, according to a new University of Michigan study.

The study examined the satellite galaxies of Messier 94, or M94, a galaxy similar in size to our Milky Way. Researchers have long known the Milky Way has about 10 smaller, satellite galaxies surrounding it, each with at least a million stars, and up to more than a billion, such as the Magellanic Clouds.

That is the real curiosity of this finding—the result is something the simulations don’t predict. When you can discover something we didn’t really think we could find, you can make a contribution to our understanding of how our universe works, that’s really rewarding.

When U-M astronomers examined M94, they expected to find a similar number of satellite galaxies. However, they detected just two galaxies near M94, with very few stars each. Their results, led by Adam Smercina, a National Science Foundation fellow in the U-M Department of Astronomy, are published in the journal Astrophysical Letters.

“More than just an observational oddity, we show that the current crop of galaxy formation models cannot produce such a satellite system,” Smercina said. “Our results indicate that Milky Way-like galaxies most likely host a much wider diversity of satellite populations than is predicted by any current model.”

Smercina also says their results have implications for the current understanding of how galaxies form—which is in much larger halos of dark matter.

These halos of dark matter surrounding galaxies have immense gravitational force, and can pull in gas from their immediate vicinity. Large galaxies like the Milky Way generally form in halos of about the same mass. But these smaller satellite galaxies, which form in smaller ‘subhalos,’ are not nearly so dependable.

The production rate of high-mass stars in these satellite galaxies actually modulates their growth. If, for example, the nascent satellite galaxy forms too many high-mass stars at one time, their eventual supernova explosions might expel all its gas and halt all further growth. But astronomers are unsure at what size halo this ‘scatter’ in galaxy formation becomes important.

Smercina says M94 indicates that galaxy formation in intermediate-sized dark halos may be much more uncertain than previously thought.

“We think that that scatter—the range of galaxies we expect to see—may be a lot higher than what people currently think for dark matter halos of a certain mass,” he said. “Nobody’s under any illusions as to there being this huge scatter at the very lowest halo masses, but it’s at these intermediate dark matter halos that the discussion is happening.”

To observe the number of satellite dwarf galaxies around M94, the researchers took a composite image of the large galaxy. The image covered about 12 square degrees of the night sky—the full moon, for comparison, appears as about one square degree. This kind of image includes layers and layers of “noise,” including cosmic rays and scattered light, which make faint dwarf galaxies difficult to detect.

To make sure they weren’t missing satellite galaxies, Smercina and his team engineered artificial galaxies back into the image and recovered them using the same methods as for real satellites. With this technique, the researchers confirmed that were no more than two galaxies around M94.

“The real kicker is whether or not the community expected this could be possible,” Smercina said. “That is the real curiosity of this finding—the result is something the simulations don’t predict. When you can discover something we didn’t really think we could find, you can make a contribution to our understanding of how our universe works, that’s really rewarding.”