The new American family: How and why we’ve changed 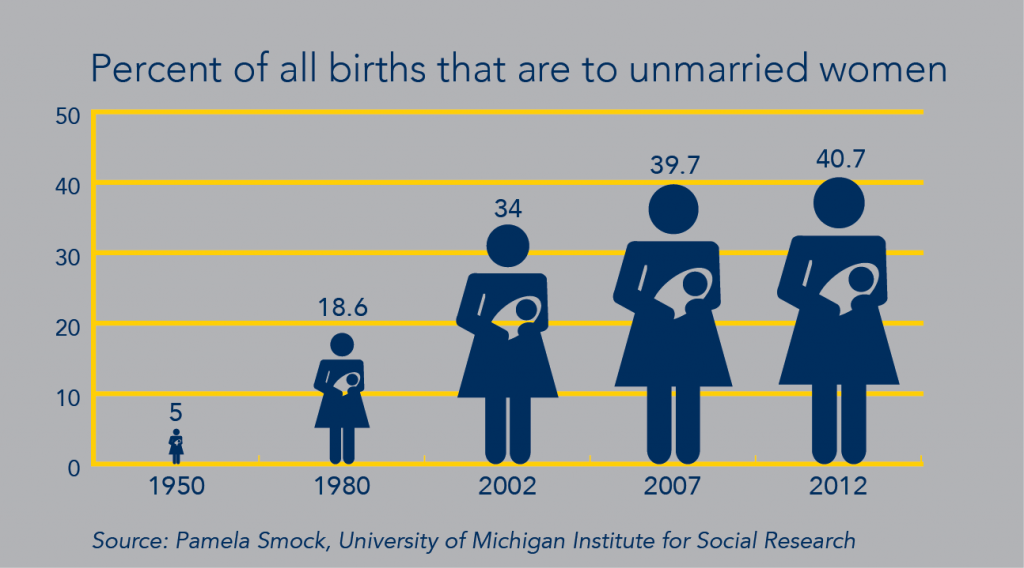 ANN ARBOR—Most young Americans plan to get married someday, but more than 40 percent of births now occur outside marriage, and the American family itself has become far more diverse and varied.

“I wouldn’t say the Ozzie and Harriet family is headed towards extinction, but it’s really a much much smaller slice of American life,” said William Frey, a demographer at the Brookings Institution and researcher at the University of Michigan Institute for Social Research, who adds that the nation is still catching up to the new reality.

The new American family is not nearly as white as it used to be. In fact, white babies may already be in the minority. In addition, mixed-race couples have become far more common, and more gay couples have started families. Unmarried households headed by same-sex couples increased 80 percent in the 2010 Census from a decade earlier to almost 650,000, and an estimated 25 percent of those households are raising children.

Nor is marriage a given. Ready birth control and changed sexual mores have removed the stigma attached to living together—and even having kids—outside of marriage.

“People weren’t opposed to cohabitation because folks were cooking together or doing laundry together,” said ISR sociologist Pamela Smock. “They were opposed to it because people were having sex outside of marriage. Once premarital sex became something people approved of, cohabitation started to escalate.”

Today about two-thirds of young adults live with a partner at some point, and three-quarters of first marriages are preceded by cohabitation, Smock says. In part because of cohabitation, the median age at which women and men marry for the first time has been creeping up—now at 25.8 for women and 28.3 for men.

As people take longer to get married, they’re also waiting longer to have kids. Teen pregnancy rates have plummeted—dropping 40 percent from 1990 to 2008—and women in their early 20s are becoming pregnant at the lowest rate in more than 30 years. The group having more babies: women over 30, and, particularly, women 40-44.

As couples shake things up, the landscape for children has changed. Forty percent of young adults have lived with cohabiting parents. Fewer than half of young adults reach age 18 in a family headed by their married biological parents. And more than half experience a change in their family structure, such as a mother divorcing or changing partners.

What does all this mean for kids? Research shows that family instability is challenging for children. ISR sociologist Paula Fomby found that nearly one in five children today lives with a half- or step-sibling at age 4, and doing so raises by 14 percent the chance that the child will act out when they start school. And kids who live with both a step-parent and step- or half-siblings show an almost 30 percent increase in aggressive behavior on entering school.

Fomby is quick to note that parents aren’t to blame for subjecting their kids to harmful churn.

“Families end up in complicated relationships largely because of macroeconomic forces that are well beyond their control,” she said. “There are disincentives to get education as the cost of education goes up. There are diminished labor force opportunities in a lot of low-income neighborhoods, so it’s hard to find a partner who is stably employed.”

A slight bright spot: Kids with close ties to a grandparent, family friend or others outside the household will likely weather changes more easily.

“Residential stability, school stability…these are all places that are familiar when other things might be changing at home,” Fomby said.