The secret world of dogs in India 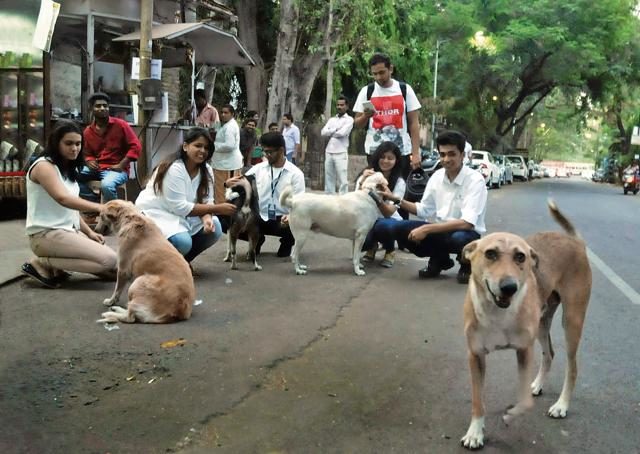 Street dogs in India that inspired U-M Stamps professor Nick Tobier to create a collection of illustrations and sketches.

ANN ARBOR—When Nick Tobier, a professor at the University of Michigan, traveled to India last year, he encountered dogs in a way he had never before. 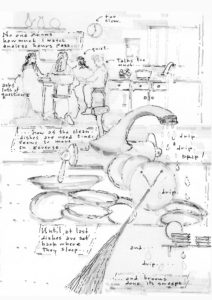 Nick Tobier wrote and sketched dogs when he was in India. His collection came together as a comic in an alternative comic magazine – Vérité. Photo Credit: Nick Tobier

In Bangalore, he would venture out to familiarize himself with the city. The many dogs he saw especially caught his eye—more so than the other animals like monkeys and cows that often are seen on Indian streets.

He saw the dogs sleeping on street corners, on construction material mounds and outside houses and shops. These street dogs fascinated him.

“They were the most familiar figure from back home, and yet unfamiliar,” Tobier said.

He started taking photos. He started sketching them. But one night, when one of the house cats disappeared, the dogs took a menacing shape.

“I realized that there is a secret life of the dogs. During day, they are relaxing and sleeping. But at night, they take a different form,” said Tobier, a professor at the U-M Stamps School of Art and Design.

“They are not those sleepy creatures. They are out roaming the streets in packs. They call out to each other, protect their turfs and sometimes even go hunting.”

Tobier started following them at night and writing about his experiences.

His collection of sketches and experiences about the dogs in India has comes together in a comic form that was published last month in India’s Vérité magazine—an alternative comics anthology magazine. 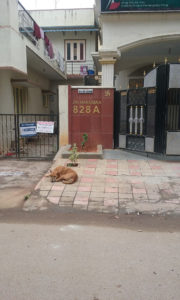 A native New Yorker, Tobier is a participant-observer of street life and the social life of public places. These inherently layered scenarios are at the core of his work, which has taken him around the world, whether it is Detroit, Paris or Tokyo, to name a few.

During his time in India, Tobier also wrote short stories to understand the busy street life and the people and animals that share the same public space. Some of those stories are written through the eyes of a dog. Here is an excerpt:

“We are street tough but just our street tough. Keep to your own streets and you don’t get any trouble from us. Likewise, we expect the same—if one of us veers off and finds ourselves on an unfamiliar street, we backtrack like no tomorrow.

“Let me put it this way—we won’t mess with you if we know you but if you are new or a stranger we will let you know. This is not a welcoming committee, but a committee to let you know who is in charge.”

Tobier also connected with many artist groups while he was in Bangalore, which is often called the Silicon Valley of India. 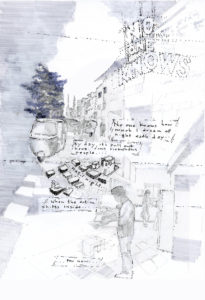 “One in particular—MARAA—was foundational in understanding the politics of the city and learning more about the people who are being displaced as the metro is getting built to connect the city,” Tobier said.

He learned about the politics of communities and how neighborhoods are informally coming together to oppose some of the developments. All of this informed his work.

Bharath Murthy, editor of Vérité, worked with Tobier to get his sketches and stories ready for publication.

Tobier feels that this first trip has created a lifelong connection to India.

“I knew so little about the diversity and the public culture of India,” he said. “I am already looking forward to my next trip.”