The water in your bottle might be older than the sun 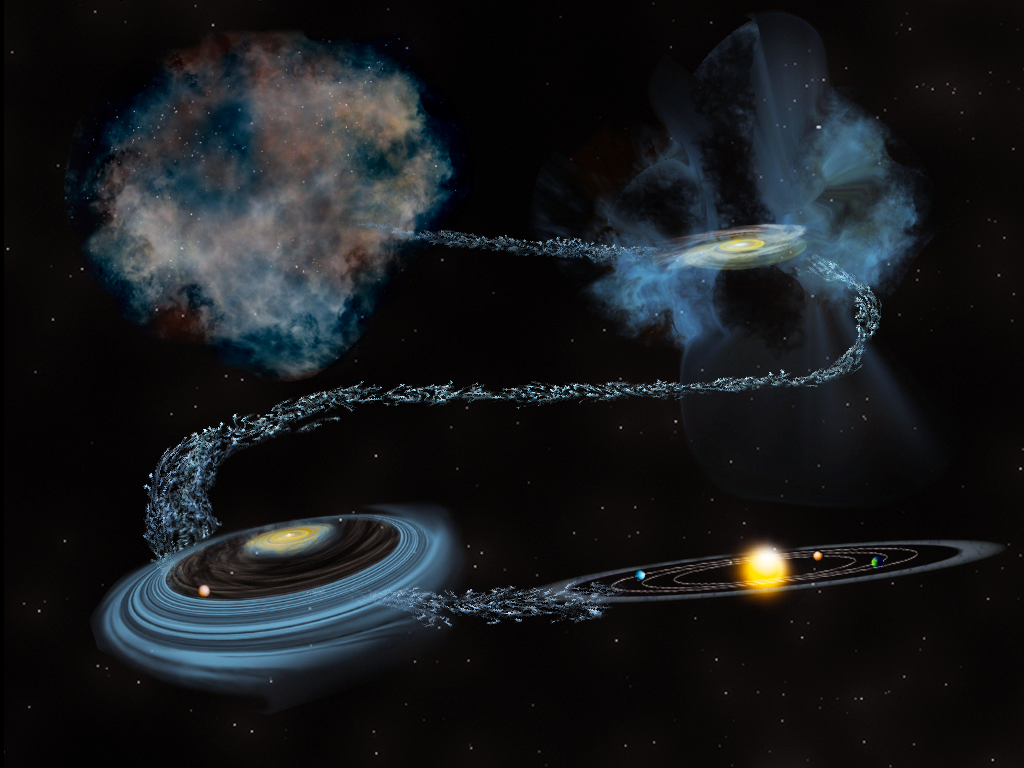 University of Michigan researchers have theorized that up to half of Earth’s water is older than the sun. It likely formed in the cold molecular cloud that spawned our solar system. Image credit: Bill Saxton, NSF/AUI/NRAOANN ARBOR—Up to half of the water on Earth is likely older than the solar system itself, University of Michigan astronomers theorize.

The researchers’ work, published in the current issue of Science, helps to settle a debate about just how far back in galactic history our planet and our solar system’s water formed. Were the molecules in comet ices and terrestrial oceans born with the system itself—in the planet-forming disk of dust and gas that circled the young sun 4.6 billion years ago? Or did the water originate even earlier—in the cold, ancient molecular cloud that spawned the sun and that planet-forming disk?

Between 30 and 50 percent came from the molecular cloud, says Ilse Cleeves, a doctoral student in astronomy at the U-M College of Literature, Science, and the Arts. That would make it roughly a million years older than the solar system.

To arrive at that estimate, Cleeves and Ted Bergin, a professor of astronomy, simulated the chemistry that went on as our solar system formed. They focused on the ratio of two slightly different varieties of water—the common kind and a heavier version. Today, comets and Earth’s oceans hold particular ratios of heavy water—higher ratios than the sun contains.

“Chemistry tells us that Earth received a contribution of water from some source that was very cold—only tens of degrees above absolute zero, while the sun being substantially hotter has erased this deuterium, or heavy water, fingerprint,” Bergin said.

To start their solar system simulation, the scientists wound back the clock and zeroed out the heavy water. They hit “go” and waited to see if eons of solar system formation could lead to the ratios they see today on Earth and in comets.

“We let the chemistry evolve for a million years—the typical lifetime of a planet-forming disk—and we found that chemical processes in the disk were inefficient at making heavy water throughout the solar system,” Cleeves said. “What this implies is if the planetary disk didn’t make the water, it inherited it. Consequently, some fraction of the water in our solar system predates the sun.”

All life on Earth depends on water. Understanding when and where it came from can help scientists estimate how common water might be throughout the galaxy.

“The implications of these findings are pretty exciting,” Cleeves said. “If water formation had been a local process that occurs in individual stellar systems, the amount of water and other important chemical ingredients necessary for the formation of life might vary from system to system. But because some of the chemically rich ices from the molecular cloud are directly inherited, young planetary systems have access to these important ingredients.

Bergin added, “Based on our simulations and our growing astronomical understanding, the formation of water from hydrogen and oxygen atoms is a ubiquitous component of the early stages of stellar birth. It is this water, which we know from astronomical observations forms at only 10 degrees above absolute zero before the birth of the star, that is provided to nascent stellar systems everywhere.”