Those home-delivered meal kits are greener than you thought, new study concludes 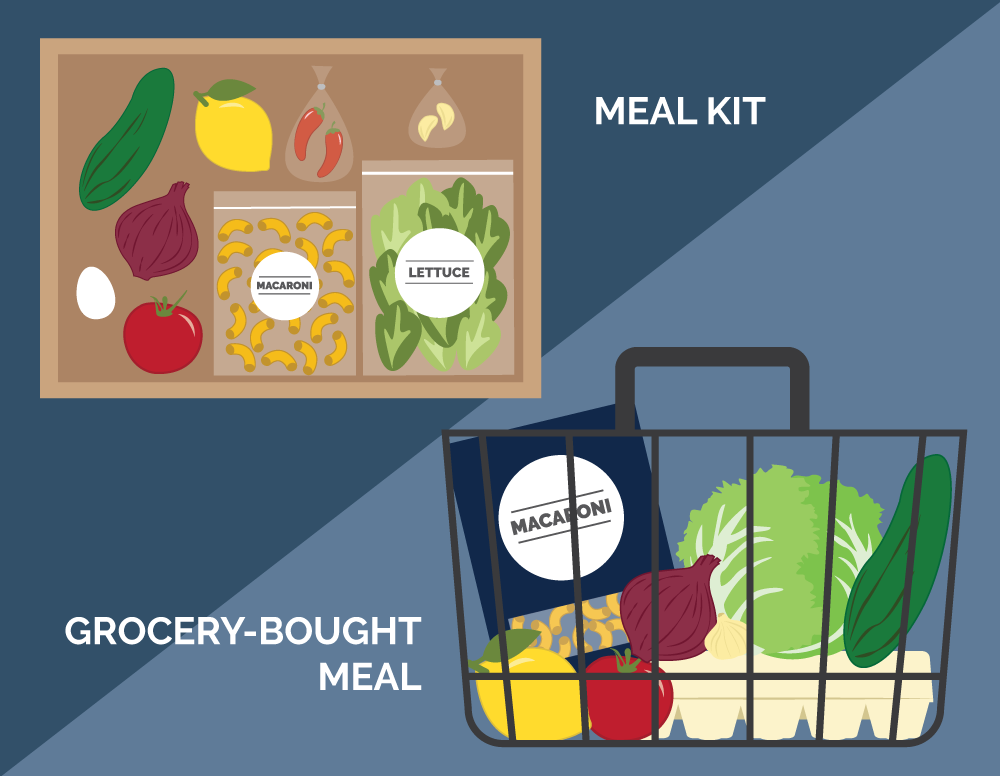 ANN ARBOR—Meal kit services, which deliver a box of pre-portioned ingredients and a chef-selected recipe to your door, are hugely popular but get a bad environmental rap due to perceived packaging waste.

But a new study from University of Michigan researchers found that meal kits have a much lower overall carbon footprint than the same meals purchased at a grocery store, despite having more packaging.

Average greenhouse gas emissions were one-third lower for meal kit dinners than the store-bought meals when every step in the process—from the farm to the landfill—was considered, according to the study.

“Meal kits are designed for minimal food waste,” said Shelie Miller of the U-M Center for Sustainable Systems in the School for Environment and Sustainability, senior author of the study published April 23 in the journal Resources, Conservation and Recycling. The first author is U-M doctoral student Brent Heard.

“So, while the packaging is typically worse for meal kits, it’s not the packaging that matters most,” Miller said. “It’s food waste and transportation logistics that cause the most important differences in the environmental impacts of these two delivery mechanisms.”

Since Blue Apron, HelloFresh and Plated entered the U.S. market in 2012, dozens of other companies have started selling meal kits that shoppers can order online and cook at home. Refrigeration packs in the boxes keep ingredients cold.

Annual U.S. meal kit sales reached an estimated $3.1 billion in 2018 with a growth rate of nearly 22 percent, according to the Packaged Facts research firm. In a 2018 Nielsen survey, 9 percent of U.S. consumers surveyed said they had purchased a meal kit, while 25 percent of respondents said they would consider trying a meal kit in the next six months.

Despite the popularity of meal kits, their environmental impacts are understudied, according to the U-M researchers. The new study assesses relative greenhouse gas emissions of meal kits compared with grocery store meals.

The recipes for five two-person meals—salmon, cheeseburger, chicken, pasta and salad—were sourced and prepared from both a meal kit service and a grocery store. Meal kits were purchased from Blue Apron.

Greenhouse gas emissions were estimated for every major step in the lifetime of the food ingredients and the packaging: agricultural production, packaging production, distribution, supply chain losses, consumption and waste generation.

This type of cradle-to-grave impacts study is called a comparative life-cycle assessment. Greenhouse gas estimates, expressed as carbon dioxide equivalent emissions per meal (CO2e/meal) were based on values found in previously published studies.

Emissions tied to household food waste from grocery meals exceeded those for meal kits for all five meals. The difference was attributed to meal kits pre-portioning ingredients, leaving fewer ingredients that are later wasted.

Generally speaking, meal kits contain large amounts of packaging but less food per meal due to pre-portioning. Grocery meals have less packaging per meal, but larger quantities of food must be purchased, leading to higher household food waste.

“We took a close look at the tradeoff between increased packaging and decreased food waste with meal kits, and our results are likely to be a surprise to many, since meal kits tend to get a bad environmental rap due to their packaging,” said Miller, associate professor at the School for Environment and Sustainability and director of the U-M Program in the Environment.

“Even though it may seem like that pile of cardboard generated from a Blue Apron or Hello Fresh subscription is incredibly bad for the environment, that extra chicken breast bought from the grocery store that gets freezer-burned and finally gets thrown out is much worse, because of all the energy and materials that had to go into producing that chicken breast in the first place,” Miller said.

By skipping brick-and-mortar retailing altogether, the direct-to-consumer meal kit model avoids the food losses that commonly occur in grocery stores, resulting in large emissions savings. For example, grocery stores overstock food items due to the difficulty in predicting customer demand, and they remove blemished or unappealing foods that may not appeal to shoppers.

Meal kits also displayed emissions savings in what’s called last-mile transportation—the final leg of the journey that gets food into the consumer’s home.

Meal kits rely on delivery trucks. Since each meal kit is just one of many packages delivered on a truck route, it is associated with a small fraction of the total vehicle emissions. Grocery store meals, in contrast, typically require a personal vehicle trip to the store and back.

In the U-M study, last-mile emissions accounted for 11 percent of the average grocery meal emissions compared to 4 percent for meal kit dinners.

“The way consumers purchase and receive food is undergoing substantial transformation, and meal kits are likely to be part of it in some way,” said Heard, who conducted the research for his doctoral dissertation at the U-M School for Environment and Sustainability.

“In order to minimize overall impacts of the food system, there is a need to continue to reduce food loss and waste, while also creating advances in transportation logistics and packaging to reduce last-mile emissions and material use.”

In the study, the largest emissions source, for both meal kits and grocery store meals, was food production: 59 percent of meal kit emissions and 47 percent of grocery meal emissions were tied to agricultural production. Meals with the largest environmental impact either contained red meat or were associated with large amounts of wasted food.

The other authors of the Resources, Conservation and Recycling paper are U-M undergraduates Mayur Bandekar of the Program in the Environment and Benjamin Vassar of the A. Alfred Taubman College of Architecture and Urban Planning.

The study is titled “Comparison of Life Cycle Environmental Impacts from Meal Kits and Grocery Store Meals.” While Blue Apron employees were consulted for the study, no funding was provided by the company.

The research was supported by the National Science Foundation under Grant No. 1804287 and the U-M Undergraduate Research Opportunity Program.