ANN ARBOR—A University of Michigan ecologist and his colleagues have discovered three more frog species in the Peruvian Andes, raising to five the total number of new frog species the group has found in a remote protected forest since 2012. 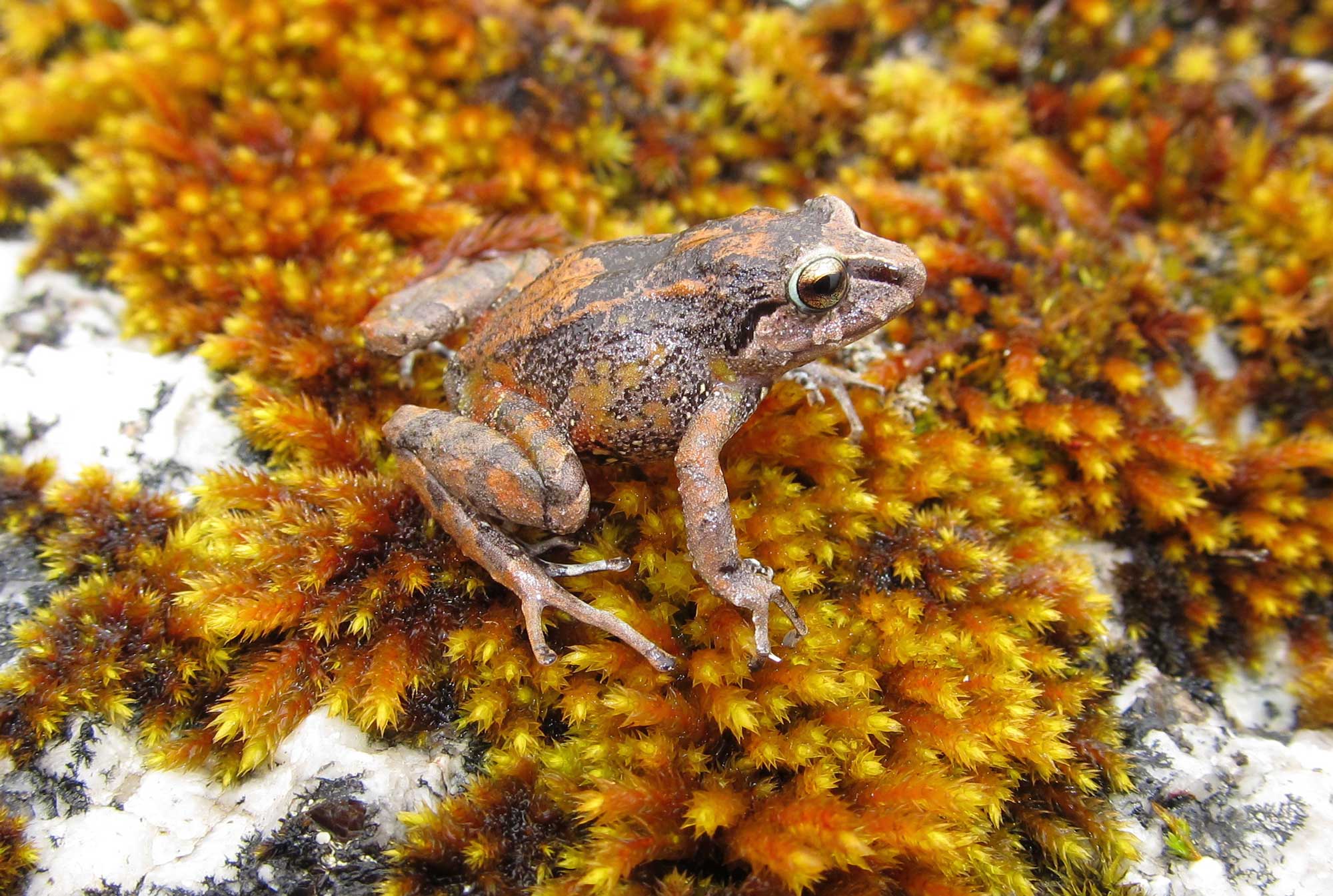 The Humboldt’s Rubber Frog, Pristimantis humboldti, is known from a single site at 10,886 feet. The species name is the patronym of the German naturalist and explorer Alexander von Humboldt (1769-1859), who traveled and studied the New World between 1799 and 1804. Image credit: Rudolf von MayThe three newly found species live in the mountain forests and Andean grasslands of the Pui Pui Protected Forest in central Peru. They are described in a study to be published online July 27 in the journal Zootaxa. All three species measure an inch or less in length, from snout to vent.

“Our team has now described five new species of frogs from this region, with several more to come in the near future,” said Rudolf von May, a postdoctoral researcher in the Rabosky Lab at the U-M Museum of Zoology and the Department of Ecology and Evolutionary Biology. Other team members are in Illinois, the Czech Republic and Peru.

“These discoveries demonstrate the need for further scientific exploration of such Andean habitats,” he said. “While the Pui Pui Protected Forest was established in 1985, virtually no biological surveys were conducted in the park for nearly three decades, and the potential for additional discoveries is enormous.” 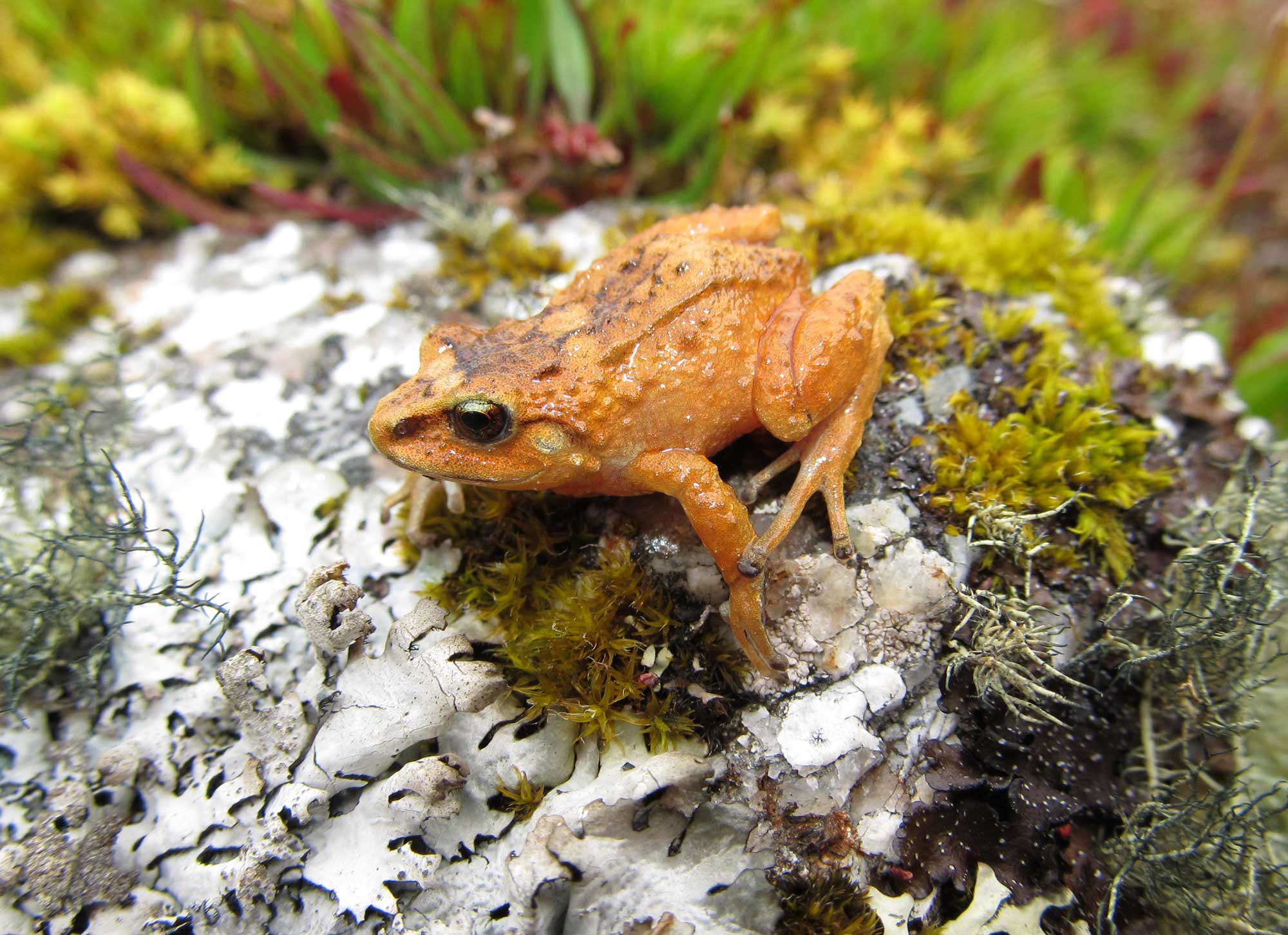 The Hill Dweller Rubber Frog, Pristimantis bounides, is known from two sites at elevations of 10,991 feet and 11,362 feet. The species name “bounides” is derived from the Greek noun “bounos,” which means “dweller of the hills” and refers to the habitat of the mountain forests where this frog was found. It is an area of mixed vegetation including large layers of mosses, small bushes, trees, and Peruvian feather grass. Image credit: Rudolf von MayThe three new frog species belong to the genus Pristimantis, the most diverse genus of frogs in the tropical Andes. With nearly 500 species, they are part of the family Craugastoridae, commonly known as land-breeding or terrestrial-breeding frogs.

While most frogs lay eggs in water, terrestrial-breeding frogs use a specialized reproductive mode called direct development: A clutch of embryos hatches directly into froglets; there are no free-living tadpoles. This allows the group to exploit a wide variety of habitats, as long as those locations contain sufficient moisture.

Terrestrial-breeding frogs appear to have undergone an evolutionary radiation at high elevations in Peru, as many species resemble one another and have similar life histories. A so-called adaptive radiation occurs when a single ancestral group produces many descendant species adapted to different habitats and ways of life.

The Zootaxa paper names and describes the three newly discovered frog species and presents supporting morphological and phylogenetic evidence. The first author of the paper is Edgar Lehr of Illinois Wesleyan University.

The frog species bear the name of the Pui Pui park, the mountain-forest habitat in the park, and a renowned naturalist-explorer. They are: 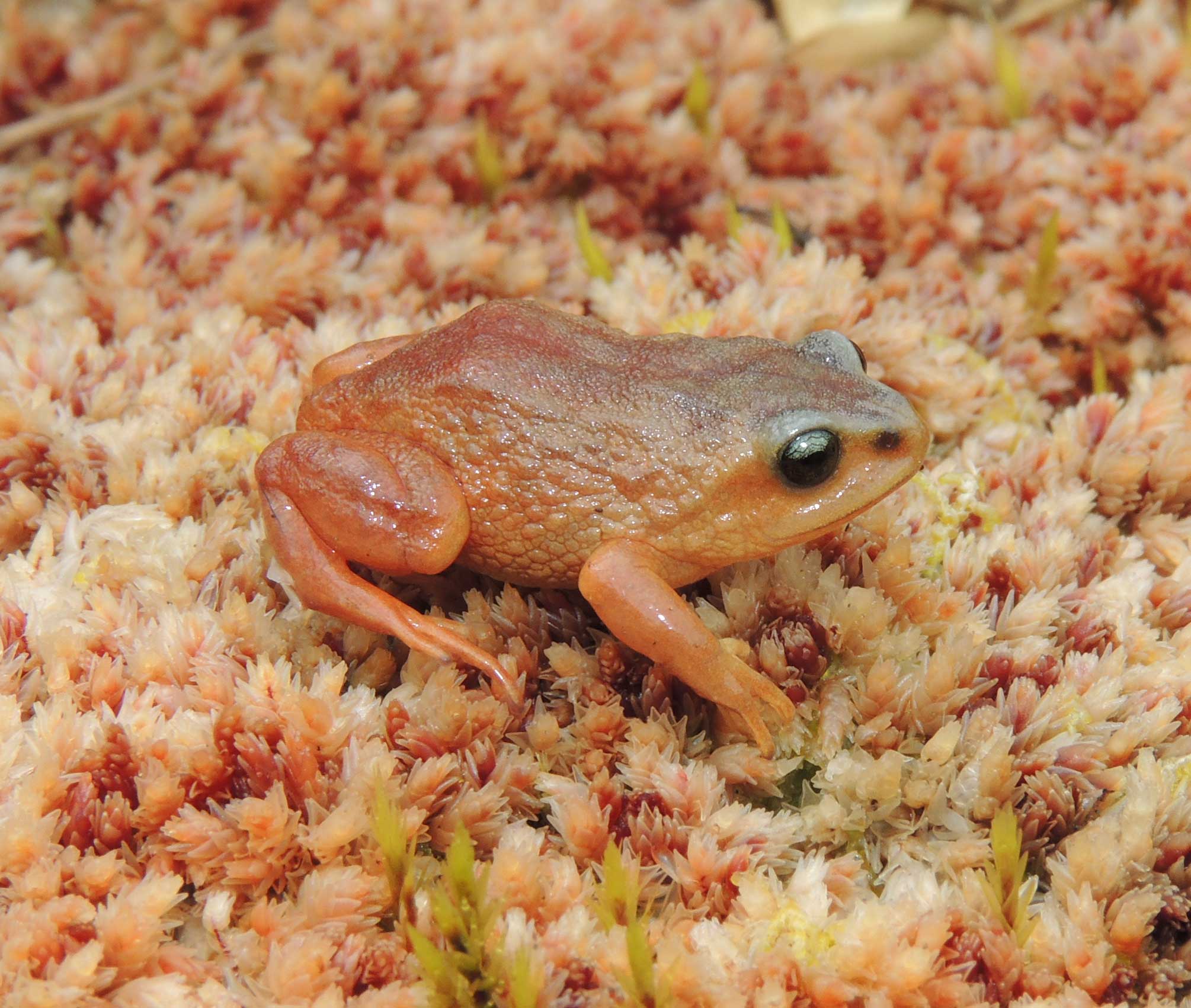 The Pui Pui Rubber Frog, Pristimantis puipui, is known from a single site near Laguna Sinchón, which marks the approximate center of the Pui Pui Protected Forest, at an elevation of 12,762 feet above sea level. The species name is derived from the Quechua words “pui pui,” meaning “eyes of water,” a reference to the many lakes of the Pui Pui Protected Forest. Image credit: Jiri MoravecEarlier this year, the researchers described two other new species of Peruvian frogs, Pristimantis ashaninka and Pristimantis attenboroughi. The first was named after the Ashaninka, a group of indigenous people from the Peruvian and Brazilian Amazon, some of whom live near Pui Pui. The second species was named after BBC naturalist and broadcaster David Attenborough.

The Pui Pui Protected Forest covers 150,000 acres and includes dozens of lakes and streams that feed several rivers in the upper Amazon River watershed. About 70 percent of the protected forest is covered by Andean grasslands, and about 30 percent is cloud forest.

“Our findings suggest that the Pui Pui Protected Forest houses unique biological communities containing species found nowhere else,” Lehr said. “One reason for this is that the area has a steep topographic gradient including a broad array of habitats and local microclimates that contribute to high amphibian species diversity.”

Von May and Lehr first discussed the possibility of exploring the Pui Pui in 2003. In early 2012, Lehr received funding from the National Geographic Society to survey the area, and they carried out the first expeditions that year. 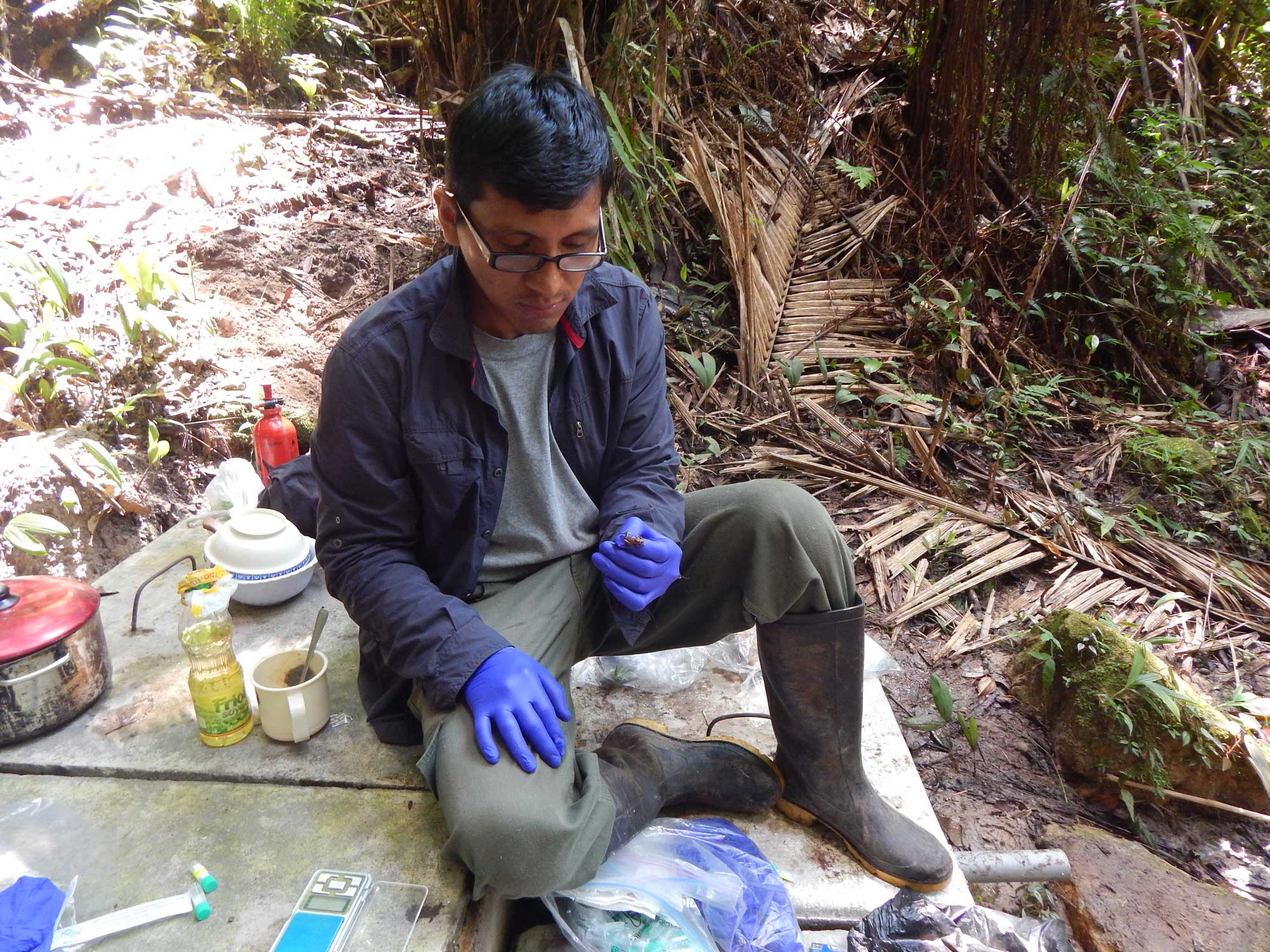 Altogether, the team spent nearly three months in the field between 2012 and 2014, in a region where mountains taller than 13,000 feet are common.

“Our team worked with local guides and park rangers,” von May said. “The equipment, food and camping supplies used in the expeditions were carried by horses and mules.”

Most of the frogs were discovered by searching through moss and grass and under rocks, small bushes and other vegetation. In some cases, the researchers found frogs after hearing the males calling during light afternoon or evening rains.

Given that the newly discovered frog species live in the Pui Pui Protected Forest, much of their habitat is formally protected. However, amphibians worldwide face multiple threats—including habitat loss, the deadly chytrid skin fungus and climate change—and Andean amphibians are no exception.

In the Peruvian Andes, habitat loss is currently the main threat. Of special concern are forest clearcuttings and manmade fires used to expand agricultural crops and grazing areas for livestock.

Worldwide, the number of known amphibian species continues to rise due to new discoveries and now stands at nearly 7,700.