Throw like a girl? No, he or she just hasn’t been taught

ANN ARBOR—”You throw like a girl” is a sexist taunt that can instantly sour a kid on athletics and other healthy activities.

To change this, Leah Robinson, associate professor at the U-M School of Kinesiology, and colleagues developed a movement curriculum to increase physical activity and motor skills competence in preschoolers by letting them choose among activities. A recent feasibility study suggests that it works. 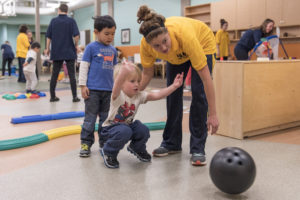 The study compared the physical activity behaviors of 72 preschoolers who were placed in either a traditional movement program or Robinson’s CHAMP curriculum, which stands for Children’s Health Activity Motor Program.

The researchers found that the CHAMP boys and girls spent roughly two more minutes per day walking and in moderate-to-vigorous physical activity than the children in the traditional movement program, and two fewer minutes standing around. Also, CHAMP children spent more time in skills practice and less time on management and learning.

“If you think about it, over an academic year, two minutes a day could make a major difference,” Robinson said.

The researchers aren’t sure why boys in CHAMP moved more than girls, but Robinson believes the focus on basic motor skills has been ignored. This can lead to a lack of competence and confidence in girls’ ability to perform these skills, she says, and could be one reason they get less physical activity than boys.

“We’re talking about basic movements: dribbling, running, skipping, hopping, jumping. Many people think these skills develop naturally, but they need to be proactively taught and reinforced,” she said.

While schools still teach these fundamentals, physical education programs are slowly diminishing, and they’re not required at all in preschool.

“The development of these core motor skills is a contributing factor to a healthy lifestyle and physical activity,” she said.

Robinson focuses on preschoolers because only half of 3-to-5-year-olds get the recommended three hours of exercise a day, she says, and more boys meet the requirement than girls.

“The data show that the rate of obesity is still increasing in that age group, and physical activity goals are rarely met,” she said.

And, the earlier girls are taught basic motor skills, the better the chances of closing the gap between the sexes, she says.

In the study, each child participated in a 30-minute movement program twice a week for nine weeks. In the CHAMP sessions, which are structured on the principle that children learn motor skills better if they can decide how to participate, preschoolers choose between several skill stations and varying levels of difficulty. The traditional program has identical content but children aren’t given choices.

Many teachers are leery of giving preschoolers so many activity choices, and Robinson concedes it’s chaotic at first, but if teachers implement the curriculum in pieces and in short bouts, kids catch on in a couple weeks.

“Teachers can start thinking and considering giving even small opportunities for choices,” said Robinson, who noted that activity stations are common in preschools––just not with movement-related activities.

The next step is a five-year NIH-funded study examining the effect of the CHAMP curriculum on the motor skills and activity of 300 Ypsilanti preschoolers who will be tracked through second grade. Researchers also want to explore self-regulation and autonomy, including the effect of CHAMP on factors like attention, memory and other classroom behaviors.

In another study, Robinson’s group found that CHAMP children scored higher on attention tasks, compared to kids in story time, and on exercise days CHAMP children performed twice as well as on sedentary days.

“These are acute benefits in terms of cognitive gains and health-related improvements,” Robinson said. “It shows that through movement we can improve outcomes that are critical to the learning environment and children’s health, but it’s important to know if these outcomes are sustainable over time.

The study, “The effect of CHAMP on physical activity and lesson context in preschoolers: A feasibility study,” appeared in Research Quarterly for Exercise and Sport.