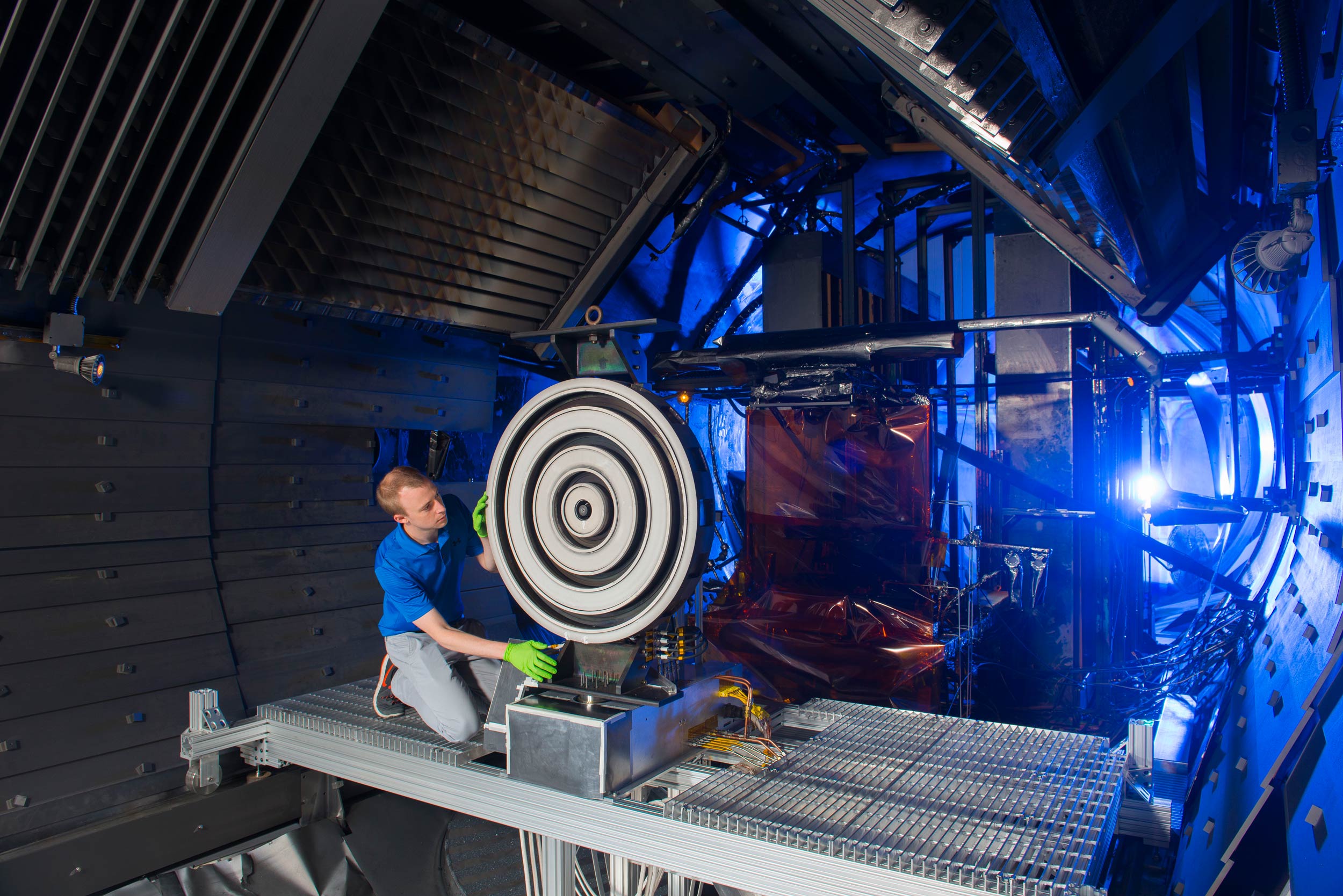 Scott Hall makes some final adjustments on the thruster before the test begins. Image credit: NASA

ANN ARBOR—An advanced space engine in the running to propel humans to Mars has broken the records for operating current, power and thrust for a device of its kind, known as a Hall thruster.

The development of the thruster was led by Alec Gallimore, University of Michigan professor of aerospace engineering and the Robert J. Vlasic Dean of Engineering.

“Mars missions are just on the horizon, and we already know that Hall thrusters work well in space,” Gallimore said. “They can be optimized either for carrying equipment with minimal energy and propellant over the course of a year or so, or for speed—carrying the crew to Mars much more quickly.”

The challenge is to make them larger and more powerful. The X3, a Hall thruster designed by researchers at U-M, NASA and the U.S. Air Force, shattered the previous thrust record set by a Hall thruster, coming in at 5.4 newtons of force compared with 3.3 newtons. The improvement in thrust is especially important for crewed mission—it means faster acceleration and shorter travel times. The X3 also more than doubled the operating current record (250 amperes vs. 112 amperes) and ran at a slightly higher power (102 kilowatts vs. 98 kilowatts). 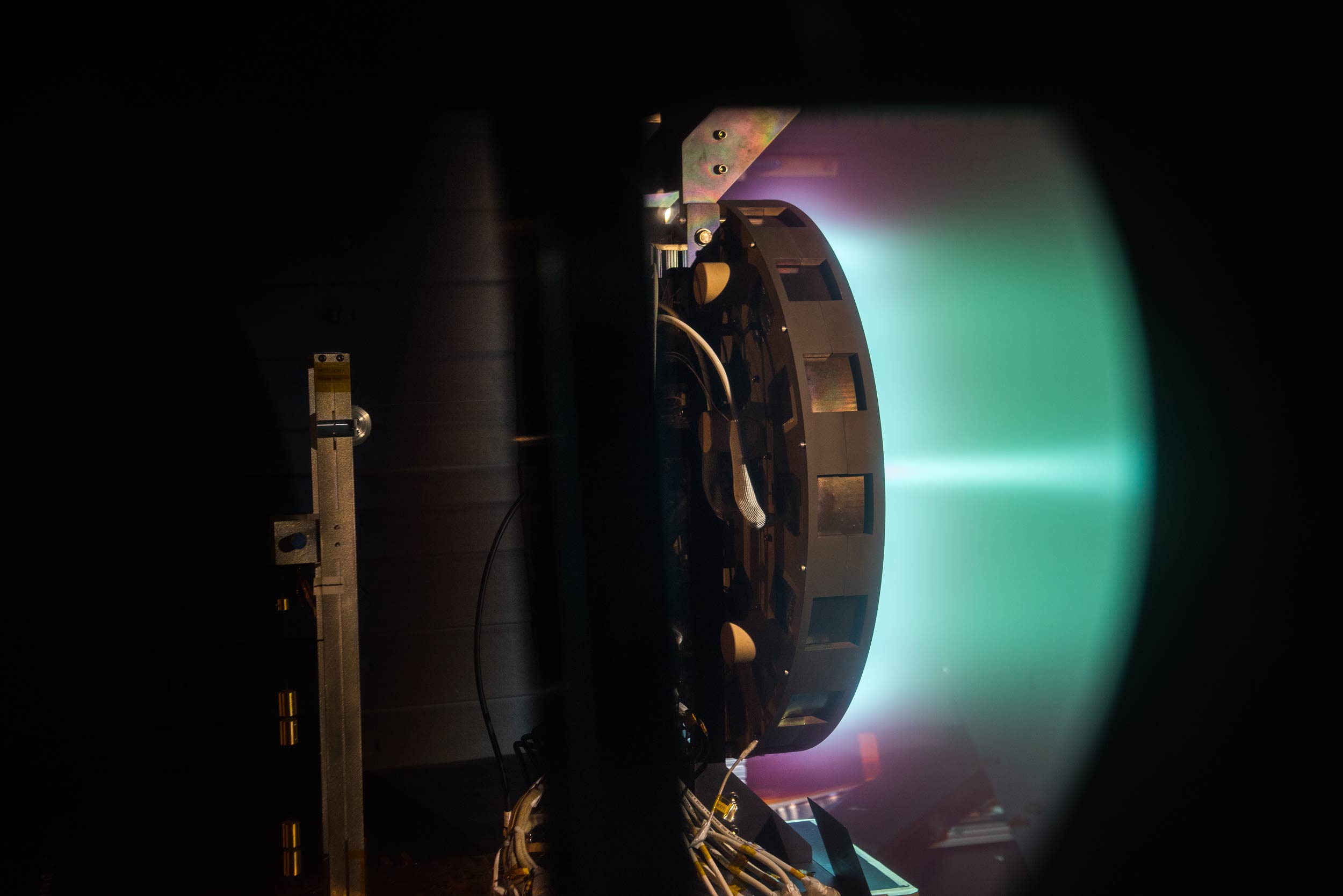 A side shot of the X3 firing at 50 kilowatts. Image credit: NASA

The X3 is one of three prototype “Mars engines” to be turned into a full propulsion system with funding from NASA. Scott Hall, a doctoral student in aerospace engineering at U-M, carried out the tests at the NASA Glenn Research Center in Cleveland, along with Hani Kamhawi, a NASA Glenn research scientist who has been heavily involved in the development of the X3. The experiments were the culmination of more than five years of building, testing and improving the thruster.

NASA Glenn, which specializes in solar electric propulsion, is currently home to the only vacuum chamber in the U.S. that can handle the X3 thruster. The thruster produces so much exhaust that vacuum pumps at other chambers can’t keep up. Then, xenon that has been shot out the back of the engine can drift back into the plasma plume, muddying the results. But as of January 2018, an upgrade of the vacuum chamber in Gallimore’s lab will enable X3 testing right at U-M.

For now, the X3 team snagged a test window from late July through August this year, starting with four weeks to set up the thrust stand, mount the thruster and connect the thruster with xenon and electrical power supplies. Hall had built a custom thrust stand to bear the X3’s 500-pound weight and withstand its force, as existing stands would collapse under it. Throughout the process, Hall and Kamhawi were supported by NASA researchers, engineers and technicians.

“The big moment is when you close the door and pump down the chamber,” Hall said.

After the 20 hours of pumping to achieve a space-like vacuum, Hall and Kamhawi spent 12-hour days testing the X3.

Even small breakages feel like big problems when it takes days to gradually bring air back into the chamber, get in to make the repair and pump the air back out again. But in spite of the challenges, Hall and Kamhawi brought the X3 up to its record-breaking power, current and thrust over the 25 days of testing.

Looking ahead, the X3 will at last be integrated with the power supplies under development by Aerojet Rocketdyne, a rocket and missile propulsion manufacturer and lead on the propulsion system grant from NASA. In spring 2018, Hall expects to be back at NASA Glenn running a 100-hour test of the X3 with Aerojet Rocketdyne’s power processing system.

The project is funded through NASA’s Next Space Technologies for Exploration Partnership, which supports not just propulsion systems but also habitat systems and in-space manufacturing.

Gallimore is also the Richard F. and Eleanor A. Towner Professor, an Arthur F. Thurnau Professor and a professor of applied physics. Kamhawi is also Hall’s NASA mentor as part of the NASA Space Technology Research Fellowship. The $1 million upgrade of the test facility in Gallimore’s lab is funded in part by the Air Force Office of Scientific Research, with additional support from NASA’s Jet Propulsion Laboratory and U-M.