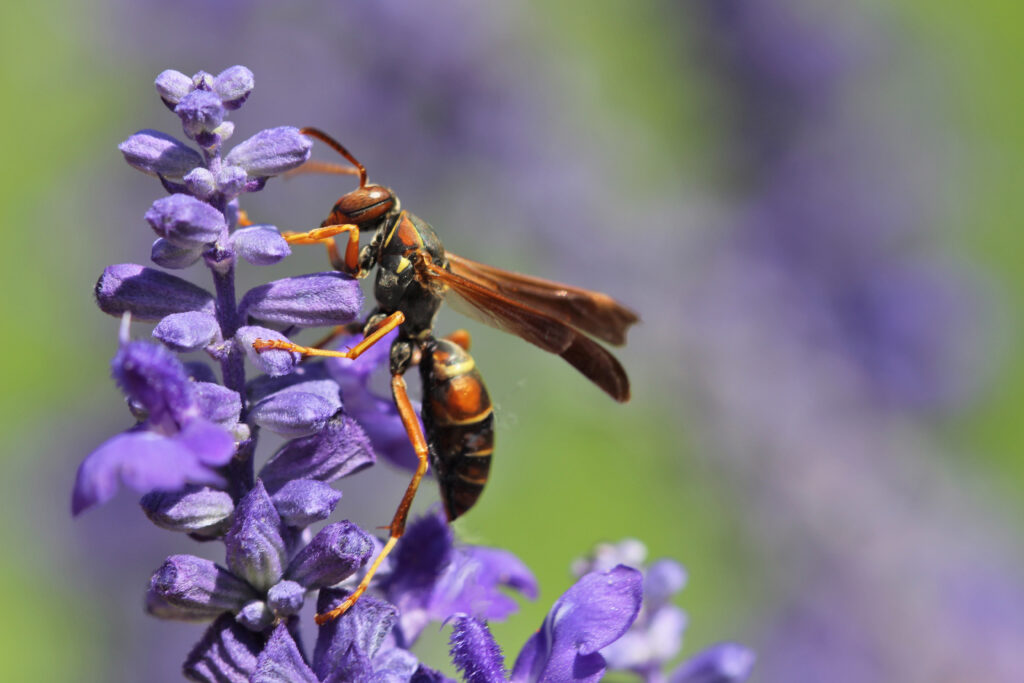 Paper wasps eavesdrop on fighting rivals to rapidly assess potential opponents without personal risk. This new finding adds to mounting evidence that even mini-brained insects have an impressive capacity to learn, remember and make social deductions about others.

Many vertebrate animals—including some birds and fish and numerous primates—minimize the costs of conflict by using “social eavesdropping” to learn about the fighting ability of potential rivals before interacting with them personally.

Keeping track of a network of individually differentiated social relationships is thought to be cognitively challenging and, until recently, was considered to be beyond the reach of lowly insects like paper wasps, which have brains a million times smaller than the human brain. 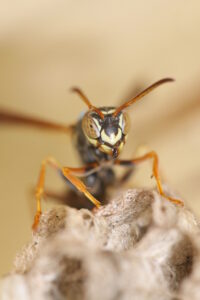 But a growing body of evidence suggests that the miniature nervous systems of insects do not limit sophisticated behaviors. The capacity for complex insect behavior may be shaped more by social environment than brain size, according to University of Michigan biologist Elizabeth Tibbetts, senior author of a paper scheduled for publication June 25 in the journal Current Biology.

“It is surprising that wasps can observe and remember a complex network of social interactions between individuals without directly interacting with them,” said Tibbetts, a professor in the U-M Department of Ecology and Evolutionary Biology. “Complex social relationships are thought to favor the evolution of large brains and increased social intelligence, but paper wasp brains are relatively small.”

In the study, Tibbetts and her students collected female Polistes fuscatus paper wasps from sites around Ann Arbor, Michigan, in the early spring.

Unlike a honeybee colony—which has a single queen and multiple equally ranked female workers—paper wasp colonies contain several reproductive females called foundresses. These females battle their rivals and form complex, linear dominance hierarchies based on the outcomes of those fights. A wasp’s rank in the hierarchy determines its share of reproduction, work and food.

In the laboratory, the researchers used enamel to mark all foundresses with unique color patterns on the thorax. Then, two at a time, “fighter” wasps were placed in a small container known as the fighting arena while two “bystander” wasps observed the pair through clear plastic partitions.

All trials were videotaped, and a research assistant assigned scores to each fighter using an aggression index that awards points for behaviors like biting, mounting, grappling and stinging. Dominance rank was determined using the number of mounts—a dominance behavior in which the dominant wasp drums her antennae on the subordinate while the subordinate crouches and lowers her antennae—during a fight. 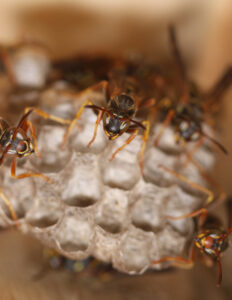 Later, bystander wasps were paired in the fighting arena either with a wasp they had observed (experimental trial) or a fighter they had never seen before (control trial). Tibbetts and her students compared the behaviors in the experimental and control trials to determine the role of social eavesdropping.

They found that bystander wasps were more aggressive when paired with an individual that was the victim of lots of aggression in a previous bout, as well as individuals who initiated very little aggression in the previous fight.

By comparing experimental and control trials, the researchers were also able to reject non-eavesdropping explanations for the observations, including phenomena called priming and winner/loser effects.

“The results show that P. fuscatus wasps use social eavesdropping,” Tibbetts said. “Bystanders observe other individuals fight, and they use information about the fight to modulate subsequent behavior.”

In previous studies over more than a decade, Tibbetts and her colleagues showed that paper wasps recognize individuals of their species by variations in their facial markings, and they behave more aggressively toward wasps with unfamiliar faces.

They also demonstrated that paper wasps have surprisingly long memories and base their behavior on what they remember of previous social interactions.

But the previous work focused on how wasps use individual recognition during direct interactions and did not test—as this new study did—whether wasps learn about other individuals via observation alone.

In addition to Tibbetts, the authors of the Current Biology paper are Ellery Wong and Sarah Bonello of the U-M Department of Ecology and Evolutionary Biology. The work was funded in part by the National Science Foundation.