To the breaking point: Testing ideas about the evolution of long-necked sauropod dinosaurs 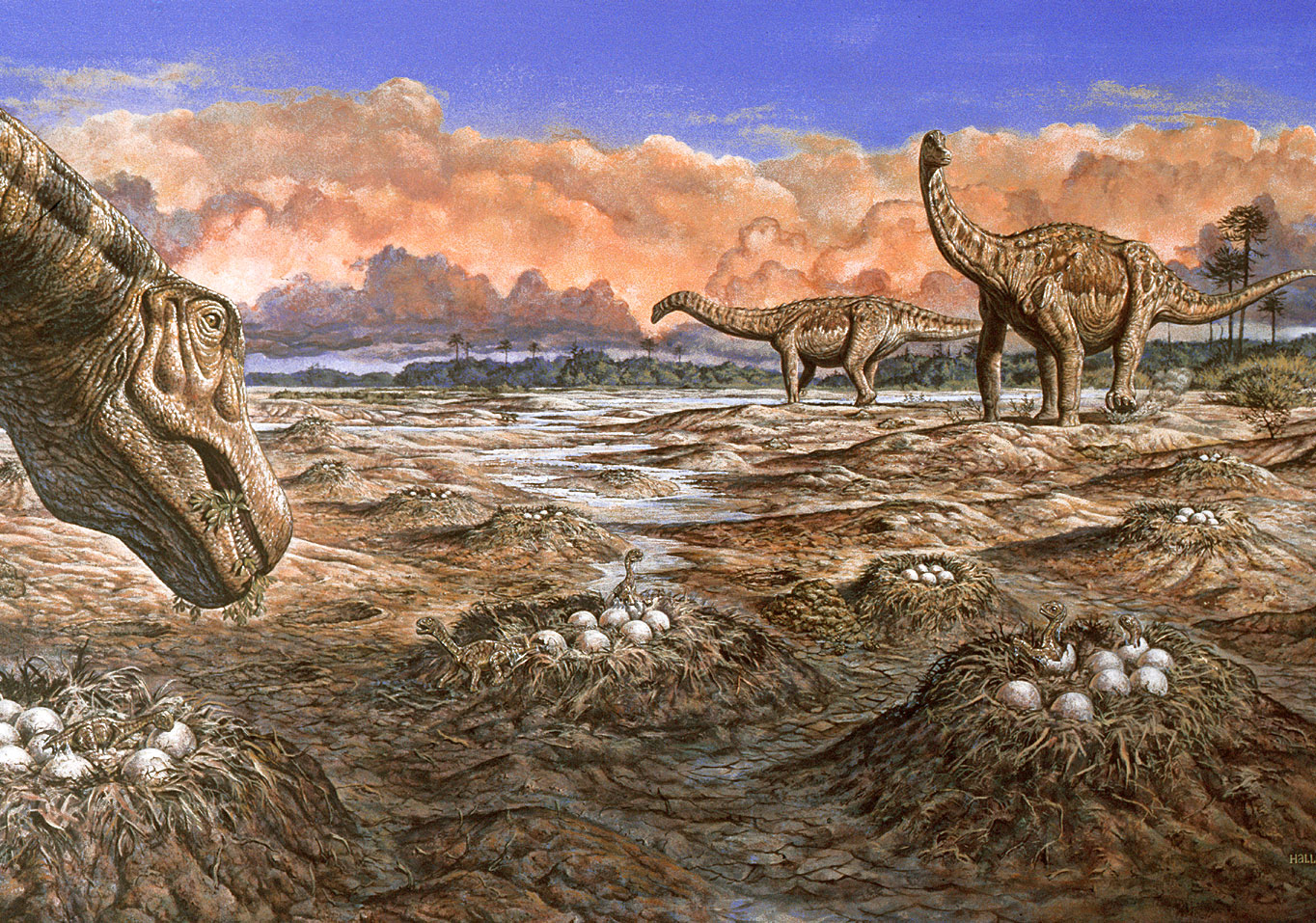 Sauropod dinosaurs at a shared nesting site in the Late Cretaceous. Artist: Mark Hallett. Source: “The Sauropods: Evolution and Paleobiology.” Kristina A. Curry Rogers and Jeffrey A. Wilson, eds. University of California Press, Berkeley, 2005. ANN ARBOR— Sauropod dinosaurs were the largest land-dwelling animals of all time, with highly elongated necks and tails that were held suspended above the ground.

Holding up such massive body parts would have placed huge stresses on the spine, especially at the flexible joints between the vertebrae. How was the sauropod skeleton able to bear such tremendous loads without causing injury or compromising mobility?

The structure of the neck joints may hold clues. It has long been recognized that sauropods had distinctive ball-and-socket vertebrae in their neck that fit together to create strong yet flexible joints. The ball of each joint always pointed away from the center of the body.

To understand the importance of such a consistent pattern, University of Michigan researchers built model ball-and-socket joints in the lab. Rubber molds were used to make epoxy models of the joints, with the ball facing either toward the body or away from it.

The epoxy allowed researchers to see where a joint was stressed when loaded with weights, increasing the risk of bone fractures. The researchers also measured the amount of weight needed to dislocate the joints.

They found that the orientation of the ball-and-socket joint did not affect the amount of stress on the joints or alter the risk of broken bones.

However, they also found that having the ball of the ball-and-socket joint facing away from the center of the body, as it is in sauropods, increased stability and made it much more difficult to dislocate the joint. When the vertebrae were positioned with the ball of the joint facing the center of the body, the joints failed sooner during weight-loading tests.

“We wanted to know whether there was an advantage to the pattern of having the ball facing away from the body, and whether this was important for the evolution of large size and long necks in sauropods,” said John Fronimos, who conducted the research as part of his doctoral dissertation in the U-M Department of Earth and Environmental Sciences.

“We found that this arrangement would have enabled sauropods to evolve longer and heavier necks and tails while avoiding catastrophic injury, all without needing to limit the motion of the neck or tail,” he said.

Fronimos is first author of a paper on the topic, “Polarity of concavo-convex intervertebral joints in the necks and tails of sauropod dinosaurs,” published online last month in the journal Paleobiology. The co-authors are Jeffrey Wilson and Tomasz Baumiller of the U-M Museum of Paleontology and the Department of Earth and Environmental Sciences.

Fronimos said the team’s findings have applications beyond sauropods. Ball-and-socket joints in the shoulders and hips of other four-legged land animals also seem to be arranged for maximum stability, he said.

Funding for the work was provided by the U-M Department of Earth and Environmental Sciences and by a University of Michigan Associate Professor Support Fund award to Wilson.