ANN ARBOR—If the mission sounds impossible, that’s because it is—at least with today’s technology: Build a three-pound flying machine that can, under its own control, take off, fly through a window into a model building, avoid security lasers, navigate the halls, recognize signs, enter the correct room, find a flash drive in a box on a desk, pick it up, leave a decoy, exit and land in under 10 minutes.

It’s the charge of the International Aerial Robotics Competition—a contest that’s in its 18th year, but only its sixth mission. It tends to take a few years for a team to build a craft that can accomplish it. In 2012, U-M’s group came closest of the 21 participating teams. And this year the students say they’re poised to succeed.

“The pieces that weren’t in place before are now,” said Jonathan Kurzer, a senior in electrical engineering who leads the circuits division. “And we know we can move on to the next task, which is winning.” 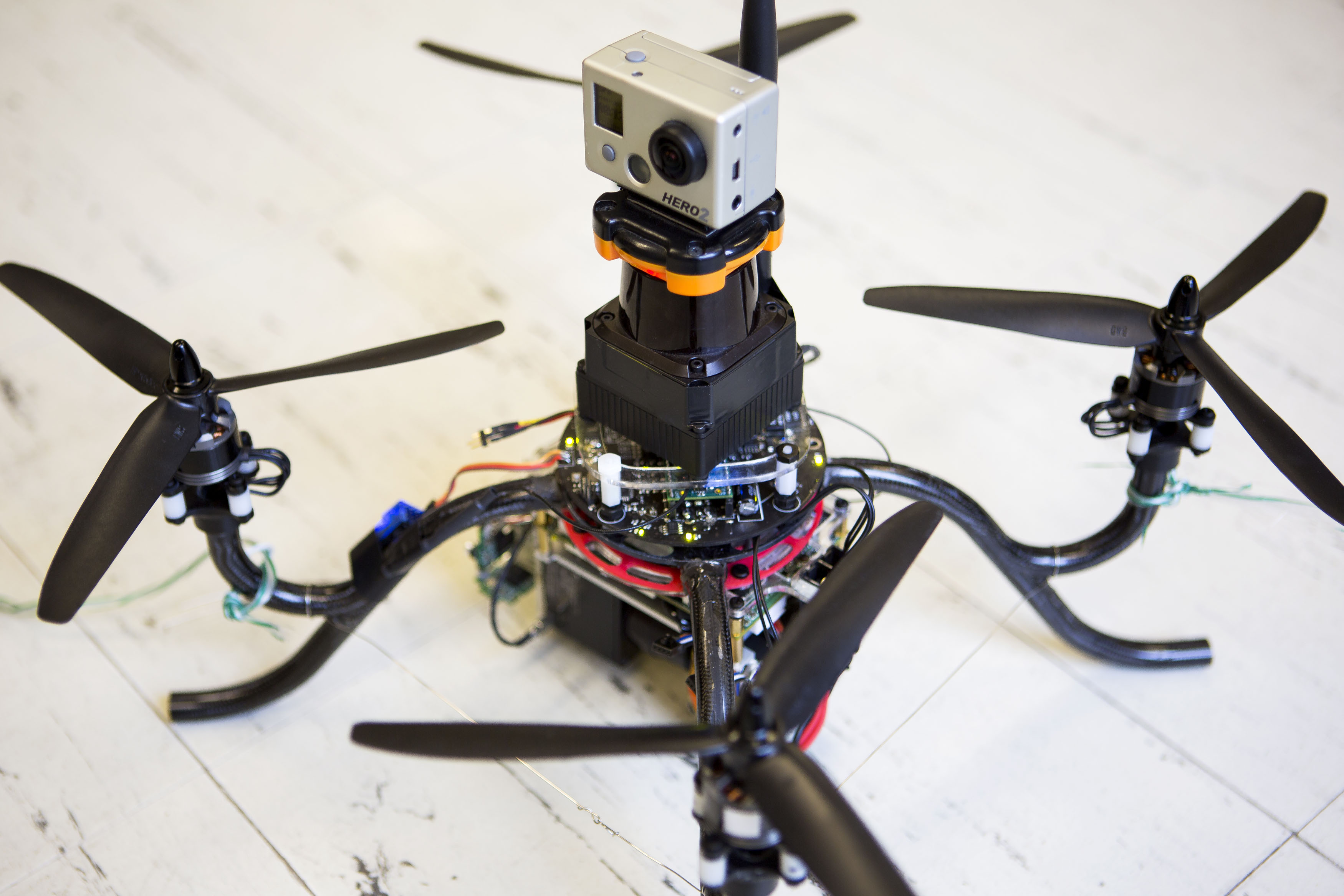 The lasers scan the environment so the craft can map its surroundings. That’s how it knows where the entry window is, and how it avoids crashing into the walls.

“It’s able to perceive the room and figure out where it is,” Bendes said. “Once it knows both what the room looks like, and where it is in the room, going to a specific place becomes much easier.”

The video cameras gather data for the image processing programs, which can identify signs as well as the prized flash drive.

The motion sensors keep tabs on the quadrotor’s flight angles and position, measuring the distance and direction it has traveled from the starting point. This is all important information for both navigating and staying stable, said Isaac Olson, a senior aerospace engineering major who heads the controls division.

The magnet’s role is to grab the flash drive. The spool is an attempt to avoid what happened last year, when the magnet dangled about eight inches from the belly of the craft.

“We caught something,” Bendes said. “A chair.”

The quadrotor broke free. Then it crashed into a wall.

The team still got more points than any of the teams because the judges determined its aircraft was the most autonomous. Autonomous air vehicles are designed to think for themselves, essentially. There’s no human controlling them remotely (though this contest requires an override switch for emergencies).

Beyond military uses, they could one day be used to survey collapsed buildings or inspect hard-to-get-to parts of bridges and other infrastructure. An offshoot group from a previous team is working to commercialize the U-M technology through a startup called SkySpecs that inspects windmills.

The students say they’re one of a few teams that build vehicles from the ground up. They work with professors to get research versions of software and hardware, then they tweak them and combine them into a truly unique system.

“Nothing within the world military or industrial arsenal of robots is able to complete the proposed mission at the time the guidelines are released,” according to the contest website.

The custom nature of the U-M quadrotor gives them an edge, team members say.

“We know this vehicle inside and out,” said Jose Gomez, a junior aerospace engineering major who leads the structures division. “We’re not black-boxed out of anything because we wrote the code. You get that warm, fuzzy feeling when it flies.”

“That’s pretty much a requirement for an aerospace engineer—when something you made flies,” Olson said.

The team will get four tries to complete the mission on Aug. 7 in Grand Forks, N.D. Fourteen students are going, but mostly to be spectators.

“All we get to do,” Bendes said, “is turn it on, press the start button, step back and wait.”

One of U-M’s top priorities is to help spur economic development through a rich variety of programs in entrepreneurship, tech transfer, venture creation, business engagement, research, and education. Learn more at innovationeconomy.umich.edu