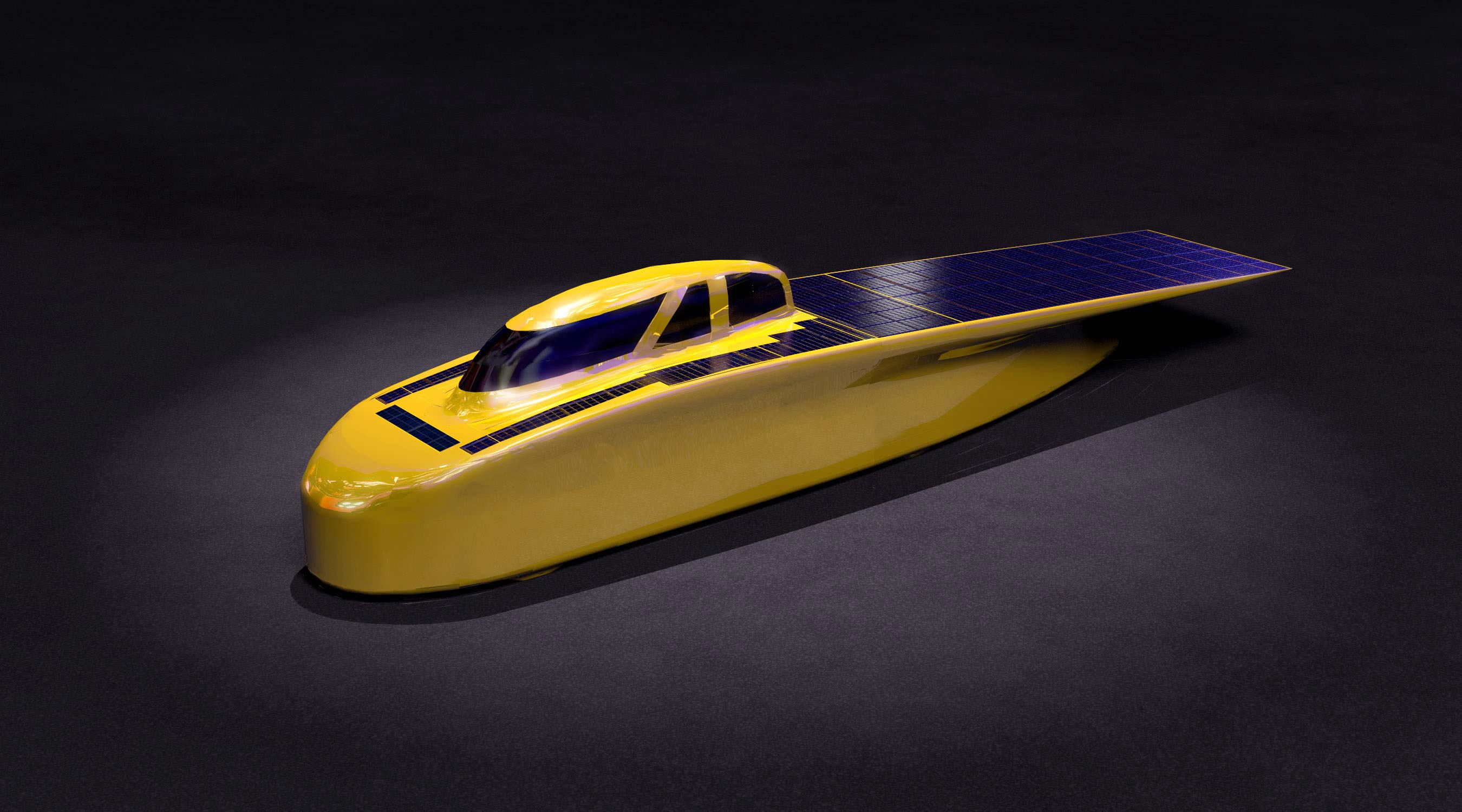 ANN ARBOR—The sun-powered vehicle that the University of Michigan’s top-ranked Solar Car Team will race in a global contest this fall is the smallest and most aerodynamic that any U-M team has ever built.

For a week in October, a 17-member race crew will guide it across the Australian Outback in the Bridgestone World Solar Challenge. Top collegiate teams from around the globe compete in the 1,800-mile event, which takes place every other year.

The U-M team has been the reigning U.S. champion for more than a decade, having won the past six American Solar Challenges, including in 2016. The team has finished third in the world race five times in its 27-year history.

The students unveiled Novum July 7 at the Michigan Theater. Measuring just over one meter across, it’s roughly 40 percent narrower than the team’s last vehicle, Aurum. imulations show that it’s around 20 percent more efficient. Beyond its design, the manufacturing process and solar technology behind this 14th-generation car are also unique compared with its predecessors.

“There are two ways to improve,” said Clayton Dailey, engineering director and a senior studying mechanical engineering. “You either refine an iteration of a previous design or you change something drastically. This year we’re going for a drastic change. We’re doing something that hasn’t been done before – going to the unknown.”

The team had considered building a small car in the past, but this time, other factors pushed the students to take the leap. First, race officials reduced the maximum size of a solar array area by roughly a third. Second, the team was able to secure high-tech, “multijunction” gallium arsenide solar cells. They’re roughly 35 percent efficient, compared to silicon cells’ 20 percent.

The last three U-M solar cars have been powered by silicon, but all previous vehicles used gallium-based arrays—ranging in junction variety and efficiency. In the eight years since the last gallium arrays, the technology has rapidly evolved, whereas silicon has plateaued. Novum’s will be the most advanced gallium cells the team has ever used.

“Flat-panel silicon is basically maxed out in terms of efficiency,” said Rachel .S. Goldman, a U-M materials science and engineering professor who works on gallium arsenide cells and is not affiliated with the team.

Novum’s gallium array is less than half the size of the previous car’s silicon counterpart, yet the team expects it to generate enough energy to maintain average speeds of 50-55 mph in Australia—similar to Aurum’s.

“Going from silicon to multijunction is a big jump in efficiency,” said Eric Brown, race array engineer and a junior studying electrical engineering. “These types of cells are found in places where space is at a premium but you need a lot of energy. So, for example, satellites use them quite a bit. There are also different things you can do to mitigate losses from curvature and shading that you can’t do with silicon.”

“My teammates and I designed a lot of strange looking cars—all the crazy ideas we thought of trying in the past,” said Jiahong Min, aerodynamics leader and a graduate student studying mechanical engineering. He studied aerospace engineering as an undergrad at U-M. “There was a lot of trial and error, but experiments showed that making it narrower was more efficient than making it shorter.”

The team’s two previous cars had a catamaran-style body with two parallel hulls. The students moved the hulls closer together as they designed narrower concepts, “until at one point we said what if we just merge them?” Min recalled. “And then–bam–that’s how the shape came together.”

To ensure that this narrower car can handle the crosswinds of the Outback, the team conducted wind tunnel tests and simulations to examine every angle and wind speed it might encounter. They’ll also do road testing, including a mock race around Michigan’s lower peninsula this summer. The World Solar Challenge begins Oct. 8.

“I think this race,” Dailey said, “will usher in the next era of solar cars.”