Toward a stem cell model of human nervous system development

ANN ARBOR—Human embryonic stem cells can be guided to become the precursor tissue of the central nervous system, research led by the University of Michigan has demonstrated.

The new study also reveals the important role of mechanical signals in the development of the human nervous system.

While studying embryonic development using animal embryos can provide useful insights about what happens during human development, human embryos grow differently even at this early stage.

“There is a critical need to establish embryonic developmental models using human cells. Not only could they advance our fundamental understanding of human development, they are also essential for regenerative medicine and for testing the safety of drugs and chemicals that pregnant women may need or encounter,” said Jianping Fu, associate professor of mechanical engineering, who has been supervising the research. 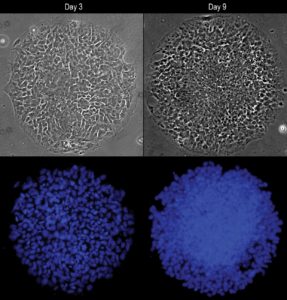 Disc-shaped colonies shown with phase contrast (top) and fluorescence (bottom) microscopy. Between day 3 and day 9, cells in the center of the colony grow faster and become much more densely packed. Confined space drives the cells in the center of the colony to become neural plate cells, whereas those cells at the colony border (experiencing less confinement) differentiate into neural plate border cells. Image: Xufeng Xue, Integrated Biosystems and Biomechanics Laboratory, University of Michigan.

“For the first time, we are able to use human embryonic stem cells to develop a synthetic model of neuroectoderm patterning, the embryonic event that begins the formation of the brain and spinal cord in the human embryo.”

In the new study, Fu’s research team arranged human embryonic stem cells into circular cell colonies with defined shapes and sizes. The cells were then exposed to chemicals known to coax them to differentiate into neural cells. During the differentiation process, cells in circular colonies organized themselves with neural plate cells in the middle and neural plate border cells in a ring around the outside.

“Since all of the cells in a micropatterned colony are in the same chemical environment, it’s amazing to see the cells autonomously differentiate into different cells and organize themselves into a multicellular pattern that mimics human development,” said Xufeng Xue, a doctoral student in mechanical engineering working in Fu’s research group. Xue is a co-first author of the paper.

Fu’s team observed that cells in the circular colony became more densely packed in the middle of the colony, where they became neural plate cells, versus the colony border, where they became neural plate border cells. Suspecting mechanical signals might affect their differentiation, they placed single human embryonic stem cells onto adhesive spots of different sizes. 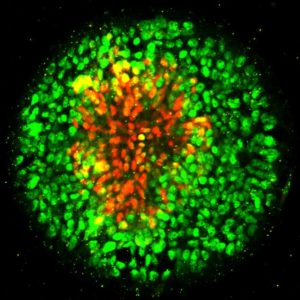 In the same chemical environment, single human embryonic stem cells grown on larger spots began signaling events within the cells that drove them toward becoming neural plate border cells. These signaling events were inhibited in stem cells confined on smaller spots. The team also developed a system to stretch cells in the middle of a colony. Responding to this mechanical signal, the cells in the middle of a colony differentiated into neural plate border cells, rather than the neural plate cells at the center of an ordinary colony.

“While many current models attribute patterning of embryonic tissues to chemical gradients or cell migration, our results show that these factors may not be the only drivers,” said Yubing Sun, a former doctoral student in Fu’s lab and now an assistant professor of mechanical and industrial engineering at the University of Massachusetts. Sun is a co-first author of the paper.

Fu is also an associate professor of biomedical engineering, cell and developmental biology, and is an associate director of the Michigan Center for Integrative Research in Critical Care.