A schematic of the molybdenum disulfide layers with lithium ions between them. On the right, the simplified inset shows how the molybdenum disulfide changes its atom arrangements in the presence and absence of the lithium atoms, between a metal (1T’ phase) and semiconductor (2H phase), respectively. Image credit: Xiaojian Zhu, Nanoelectronics Group, University of Michigan.

ANN ARBOR—A new electronic device developed at the University of Michigan can directly model the behaviors of a synapse, which is a connection between two neurons.

For the first time, the way that neurons share or compete for resources can be explored in hardware without the need for complicated circuits.

“Neuroscientists have argued that competition and cooperation behaviors among synapses are very important. Our new memristive devices allow us to implement a faithful model of these behaviors in a solid-state system,” said Wei Lu, U-M professor of electrical and computer engineering and senior author of the study in Nature Materials. 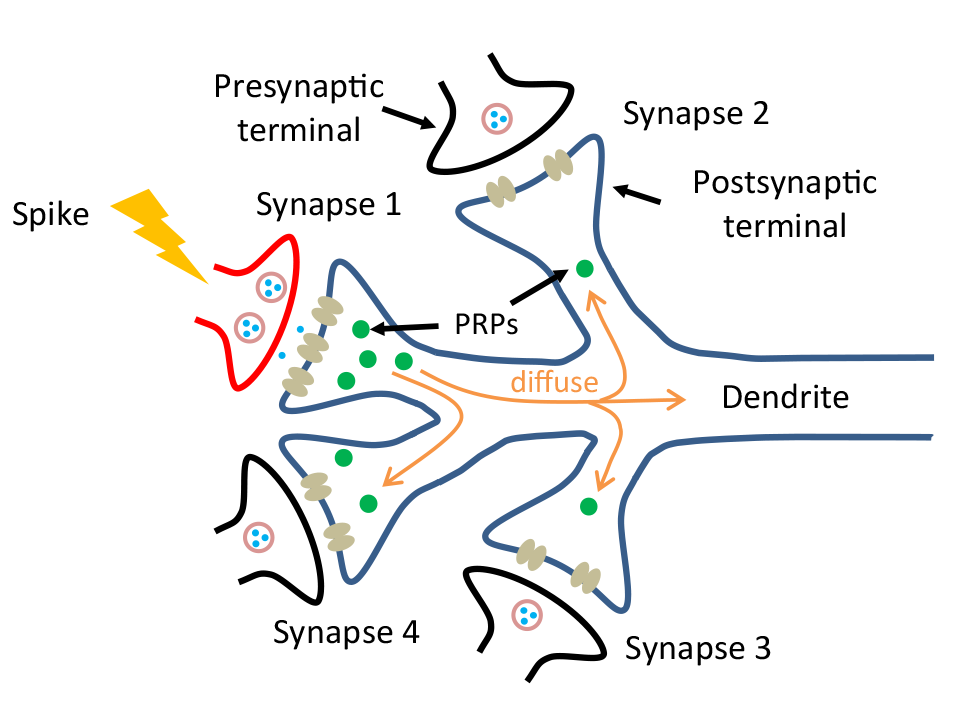 A diagram of a synapse receiving a signal from one of the connecting neurons. This signal activates the generation of plasticity-related proteins (PRPs), which help a synapse to grow. They can migrate to other synapses, which enables multiple synapses to grow at once. The new device is the first to mimic this process directly, without the need for software or complicated circuits. Image credit: Xiaojian Zhu, Nanoelectronics Group, University of Michigan.

Memristors are electrical resistors with memory—advanced electronic devices that regulate current based on the history of the voltages applied to them. They can store and process data simultaneously, which makes them a lot more efficient than traditional systems. They could enable new platforms that process a vast number of signals in parallel and are capable of advanced machine learning.

The memristor is a good model for a synapse. It mimics the way that the connections between neurons strengthen or weaken when signals pass through them. But the changes in conductance typically come from changes in the shape of the channels of conductive material within the memristor. These channels—and the memristor’s ability to conduct electricity—could not be precisely controlled in previous devices.

Now, the U-M team has made a memristor in which they have better command of the conducting pathways.They developed a new material out of the semiconductor molybdenum disulfide—a “two-dimensional” material that can be peeled into layers just a few atoms thick. Lu’s team injected lithium ions into the gaps between molybdenum disulfide layers.

They found that if there are enough lithium ions present, the molybdenum sulfide transforms its lattice structure, enabling electrons to run through the film easily as if it were a metal. But in areas with too few lithium ions, the molybdenum sulfide restores its original lattice structure and becomes a semiconductor, and electrical signals have a hard time getting through. 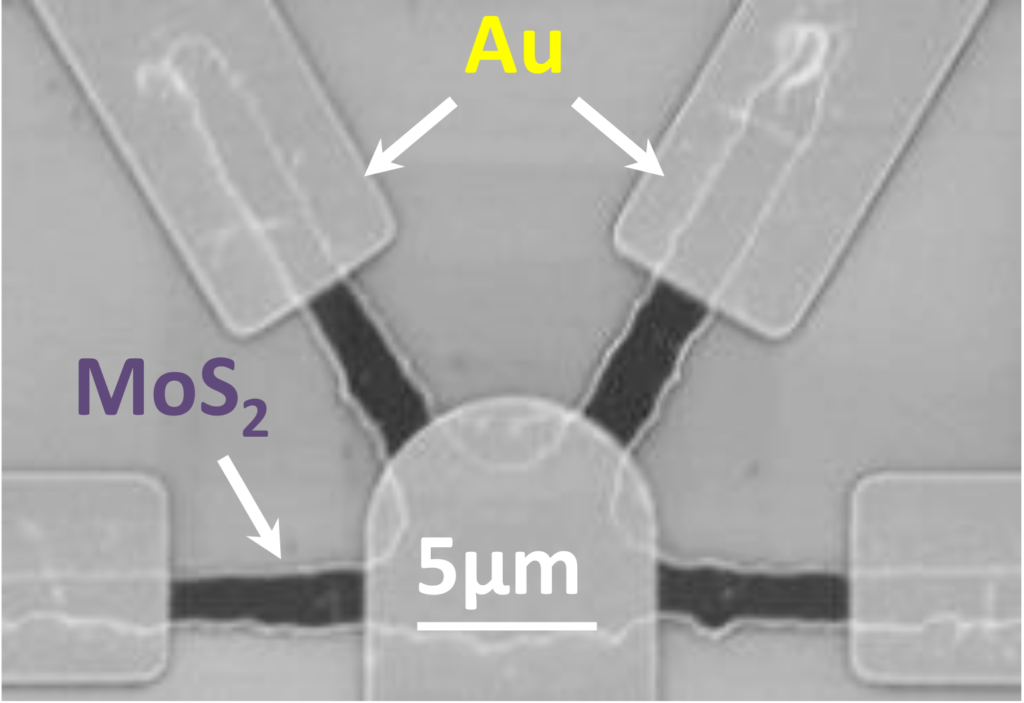 The lithium ions are easy to rearrange within the layer by sliding them with an electric field. This changes the size of the regions that conduct electricity little by little and thereby controls the device’s conductance.

“Because we change the ‘bulk’ properties of the film, the conductance change is much more gradual and much more controllable,” Lu said.

In addition to making the devices behave better, the layered structure enabled Lu’s team to link multiple memristors together through shared lithium ions—creating a kind of connection that is also found in brains. A single neuron’s dendrite, or its signal-receiving end, may have several synapses connecting it to the signaling arms of other neurons. Lu compares the availability of lithium ions to that of a protein that enables synapses to grow.

If the growth of one synapse releases these proteins, called plasticity-related proteins, other synapses nearby can also grow—this is cooperation. Neuroscientists have argued that cooperation between synapses helps to rapidly form vivid memories that last for decades and create associative memories, like a scent that reminds you of your grandmother’s house, for example. If the protein is scarce, one synapse will grow at the expense of the other—and this competition pares down our brains’ connections and keeps them from exploding with signals.

Lu’s team was able to show these phenomena directly using their memristor devices. In the competition scenario, lithium ions were drained away from one side of the device. The side with the lithium ions increased its conductance, emulating the growth, and the conductance of the device with little lithium was stunted.

In a cooperation scenario, they made a memristor network with four devices that can exchange lithium ions, and then siphoned some lithium ions from one device out to the others. In this case, not only could the lithium donor increase its conductance—the other three devices could too, although their signals weren’t as strong.

Lu’s team is currently building networks of memristors like these to explore their potential for neuromorphic computing, which mimics the circuitry of the brain.

The research was supported in part by the National Science Foundation. It was done in collaboration with the group of Xiaogan Liang, U-M professor of mechanical engineering.