Toward ultimate light efficiency on the cheap 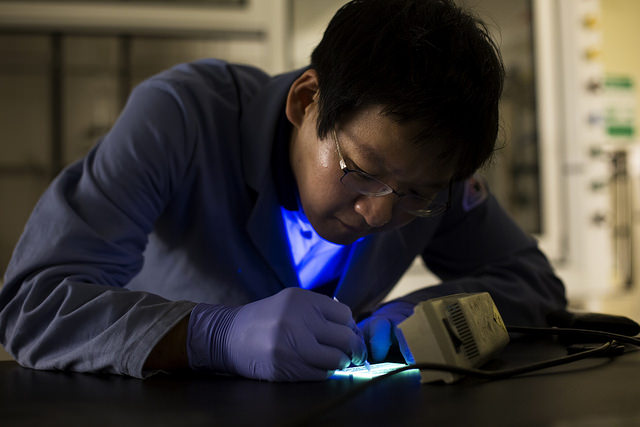 Min Sang Kwon, Postdoctoral Fellow, tests phosphorescent LEDs by writing on them with water. Image credit: Joseph XuANN ARBOR—Researchers at the University of Michigan have taken a major stride toward perfectly efficient lighting that is also relatively inexpensive and simple to make. The same material can also reveal the presence of water by changing color.

LEDs are semiconductors that produce light when an electric current runs through them. Carbon-based, or organic, semiconductors are much cheaper than inorganic semiconductors, but today’s organic technologies rely on metals in the semiconductor to enable phosphorescence. This raises the price and sometimes makes the material toxic. Now, the team of Jinsang Kim, a professor of materials science and engineering, developed bright, metal-free, organic, phosphorescent light emitters.

The challenge was coaxing the semiconductors to produce light rather than heat. When a current creates electrical charges inside a semiconductor, the charges can go on to produce light in one of two ways. One in four of the charges can cause fluorescence – resulting in the 25 percent efficiency limit for fluorescent LEDs – while three in four can be used for phosphorescence, emitting slightly lower energy light than fluorescence.

Organic semiconductors, if left to their own devices, fritter away the 75 percent of the energy that might produce phosphorescence. Instead of light, they generate vibrations in the surrounding molecules, heating the material. Incorporating metals can tip the balance toward light emission for the charges that could phosphoresce, but going metal-free requires a new solution.

“That’s why phosphorescence from metal-free organic materials in nature is very rare,” said Min Sang Kwon, a materials science and engineering postdoc in Kim’s lab. One example, he added, is the Hope Diamond. 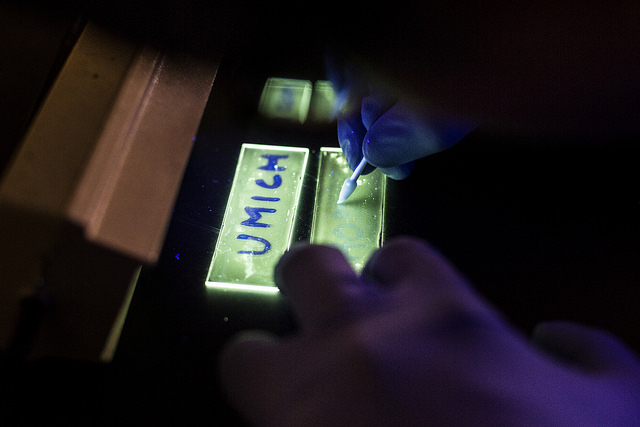 The phosphorescent LEDs can reveal the presence of water under backlight. Water causes polymers to break in the LEDs, changing from phosphorescent light (green) to fluorescent light (blue). Image credit: Joseph XuThough famously blue, the diamond glows red after exposure to ultraviolet light. Traces of boron its carbon structure are thought to produce both the blue color and the phosphorescence.

Although it is unknown whether the diamond’s rigid structure helps it to phosphoresce, Kim and his team demonstrated that the crystal approach works for their all-organic light emitters. The stiff lattice stifled vibrations, allowing more energy to be released as light. The group’s crystals produced light from 55 percent of the charges, but it is very difficult to consistently produce high quality crystals in manufacturing.

Instead, the group sought to provide rigidity with less effort. They tweaked the design of the molecules so that they would form structural bonds with a transparent polymer, similar to the way magnets snap together.

The team heated and dried a solution containing the newly devised light emitters and polymers, and the molecules self-assembled into a stiff matrix. This design allowed 24 percent of the charges to produce light. While this number is only about as good as fluorescent light, the team is working on a complementary way to further improve the efficiency.

“We demonstrated that increasing the intermolecular bonding strength could efficiently suppress the vibrational loss of the phosphorescent light,” said Kim. “This finding provides an insight into molecular designs for achieving energy-efficient and inexpensive light-emitters, ideal for practical devices.”

This material can also reveal the presence of water. By dissolving the connections between the polymers, water breaks up the bonds that allow the charges that could produce fluorescence to convert to phosphorescent states. Those bonds cause the light emitter to give off mostly phosphorescent light, which is green for this material, but when the bonds break, it switches to the fluorescent mode, emitting blue light.

“We can see the change from phosphorescence to fluorescence, and we know some water is there,” said Kwon.

This could lead to simple sensors for detecting water. As an example, Kim and Kwon said that dentists need a way to check that a cavity is totally dry before filling it to ensure a secure bond and minimize inflammation. A probe made with this material would change from green to blue on exposure to a small amount of water.

The research was funded by a Samsung Global Research Outreach grant.