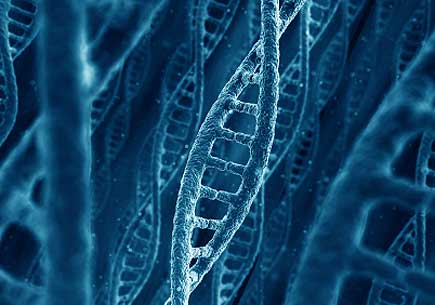 ANN ARBOR—Structures that put a spin on light reveal tiny amounts of DNA with 50 times better sensitivity than the best current methods, a collaboration between the University of Michigan and Jiangnan University in China has shown.

Highly sensitive detection of DNA can help with diagnosing patients, solving crimes and identifying the origins of biological contaminants such as a pathogen in a water supply.

“It really does not matter where the target DNA is from,” said Nicholas Kotov, the Joseph B. and Florence V. Cejka Professor of Chemical Engineering at U-M. “In order to detect a specific DNA, we just need to know a small portion of its sequence.”

Current DNA analysis methods rely on copying segments of a strand of DNA. The process unzips the double helix and then short, lab-made ‘primer’ DNA strands attach to each half of the original DNA. These primers kick-start the copying process, using the unzipped DNA as a template. Targeted segments of DNA can be replicated in this way, doubling every cycle. If enough DNA is produced before copying errors become a major problem, then further analysis can show whether the sample matches a suspect, for example.

But if the primers were very selective for the suspected DNA sequence, then a match could be determined by simply detecting whether the DNA had copied or not. Studies revealed that small amounts of DNA could be observed when spherical gold nanoparticles were attached to the primers. If the DNA matched suspicions, strings of particles bound together with DNA would form in the replication process. The nanoparticle solution would change color from red to blue, due to the way the strings of particles interact with light.

“Impressive detection limits were attained for short DNAs with nanoparticles; however, not for long DNA,” Kotov said.

The problem, he explained, is that if the particles are further apart than a few nanometers, or millionths of a millimeter, “they do not interact strongly and the blue color does not happen.” Longer strands are needed to differentiate between species and individuals with greater accuracy.

“If the strands are too short, you could mix up the DNA of a killer with that of the friend’s dog—or a signature of malignant stomach cancer with the piece of a chicken burrito,” Kotov said.

He and his partner Chuanlai Xu, a professor of food science and technology at Jiangnan University in China, led an effort to see whether a more subtle optical change would hold up to longer distances.

Rather than using spherical nanoparticles, the team started with nanorods, shaped like tiny Mike and Ike candies, about 62 nanometers long and 22 nanometers in diameter. They attached the primer DNA to the sides of these.

When nanorods line up, they tend to misalign by about 10 degrees. After a few rounds of copying, the gold and DNA structures resembled twisted rope ladders. Light passing through the spiral of golden spokes reacted by rotating.

“The light can be rotated even when the nanorods are far away from each other,” Kotov said. “This gives our methods a tremendous advantage in sensitivity for long DNA strands.”

The rotation happens because light is composed of electric and magnetic waves moving in tandem, and electric and magnetic fields exert forces on charged particles that have freedom to move, such as electrons in metals. The electrons in gold respond very well to the frequency of visible light waves, so they begin to move back and forth in the gold, synced with the light. This effect is a two-way street: the moving electrons in the gold can also affect the light waves.

Kotov compares the light to a rope with ripples running through it.

“Now imagine that the air around the rope can move more easily along certain directions,” Kotov said.

For light passing through the gold nanorods, it’s easiest if the electric wave moves up and down the length of the nanorods, so the light rotates as it moves from nanorod to nanorod and continues twisting after it leaves the structure. And depending on whether the light starts out rotating clockwise or counterclockwise, it feels the twist from the nanorods most at different wavelengths.

“For analytical purposes, this is a gift,” Kotov said.

The two peaks in the amount of twisting for clockwise and counterclockwise light can be added together, which makes for a stronger signal and allows the method to identify a match with smaller amounts of DNA.

“The strength of the rotation reaches maximum when the gap between nanorods is 20 nanometers, which is exactly what we need for the detection of long, selective and species-specific DNA strands,” Kotov said. “The calculations presented show that we can potentially increase the sensitivity even more in the future and to even longer DNAs.”