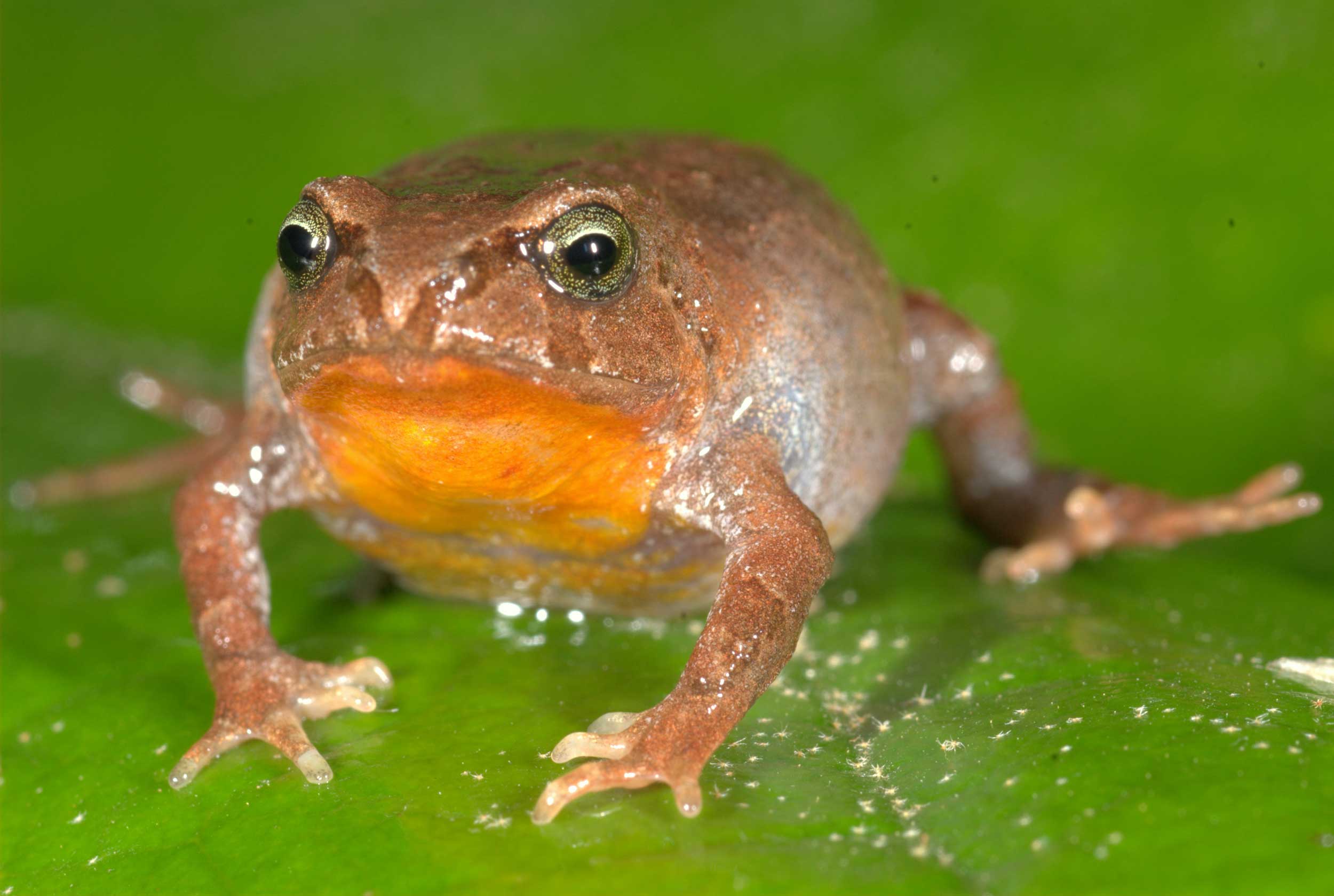 Bryophryne hanssaueri is one of the 22 species included in the Peruvian frog study. Individuals of this species have a bright orange throat and belly. Adults typically range in size from 0.47 to 1.13 inches (1.20 – 2.87 centimeters) in length. These frogs live under mosses and leaf litter in the high-elevation cloud forest between 10,480 and 11,250 feet, just below the treeline. Like other Bryophryne species, females attend clutches of direct-developing embryos until they hatch into tiny froglets. Image credit: Alessandro CatenazziANN ARBOR—A new study of Peruvian frogs living at a wide variety of elevations—from the Amazon floodplain to high Andes peaks—lends support to the idea that lowland amphibians are at higher risk from future climate warming.

That’s because the lowland creatures already live near the maximum temperatures they can tolerate, while high-elevation amphibians might be more buffered from increased temperatures, according to a study by University of Michigan ecologist Rudolf von May and his colleagues published online April 6 in the journal Ecology and Evolution.

Previous studies have suggested that lowland reptiles and amphibians are especially vulnerable to climate warming. But in most cases, those conclusions were based on computer modeling work that incorporated a limited amount of field data.

“Understanding how species respond to climatic variation is critical for conserving species in future climatic conditions. Yet for most groups of organisms distributed in tropical areas, data about species’ critical thermal limits are limited,” said von May, a postdoctoral researcher in the U-M Department of Ecology and Evolutionary Biology.

“I think the contribution of our study is that it focuses on a group of closely related frog species distributed along a single montane gradient and that it includes empirical data on species’ tolerance to heat and cold, as well as air temperatures measured along the same gradient.”

In the process of conducting the study, which involved more than two years of fieldwork, von May and his colleagues identified three previously unknown frog species. Those newly discovered species will be described separately in a series of journal articles.

The elevational-gradient study focused on the thermal ecology and evolution of 22 species of land-breeding frogs, which are also known as terrestrial-breeding frogs, in southern Peru’s Manu National Park and surrounding areas. Sampled elevations ranged from the Amazon River floodplain, at 820 feet above sea level, to 12,000-foot Andes Mountains peaks.

While most frogs lay eggs in water, terrestrial-breeding frogs use a specialized reproductive mode called direct development: A clutch of embryos hatch directly into froglets; there are no free-living tadpoles. Terrestrial-breeding frogs form a diverse group that can exploit a wide variety of habitats, as long as those locations contain sufficient moisture. 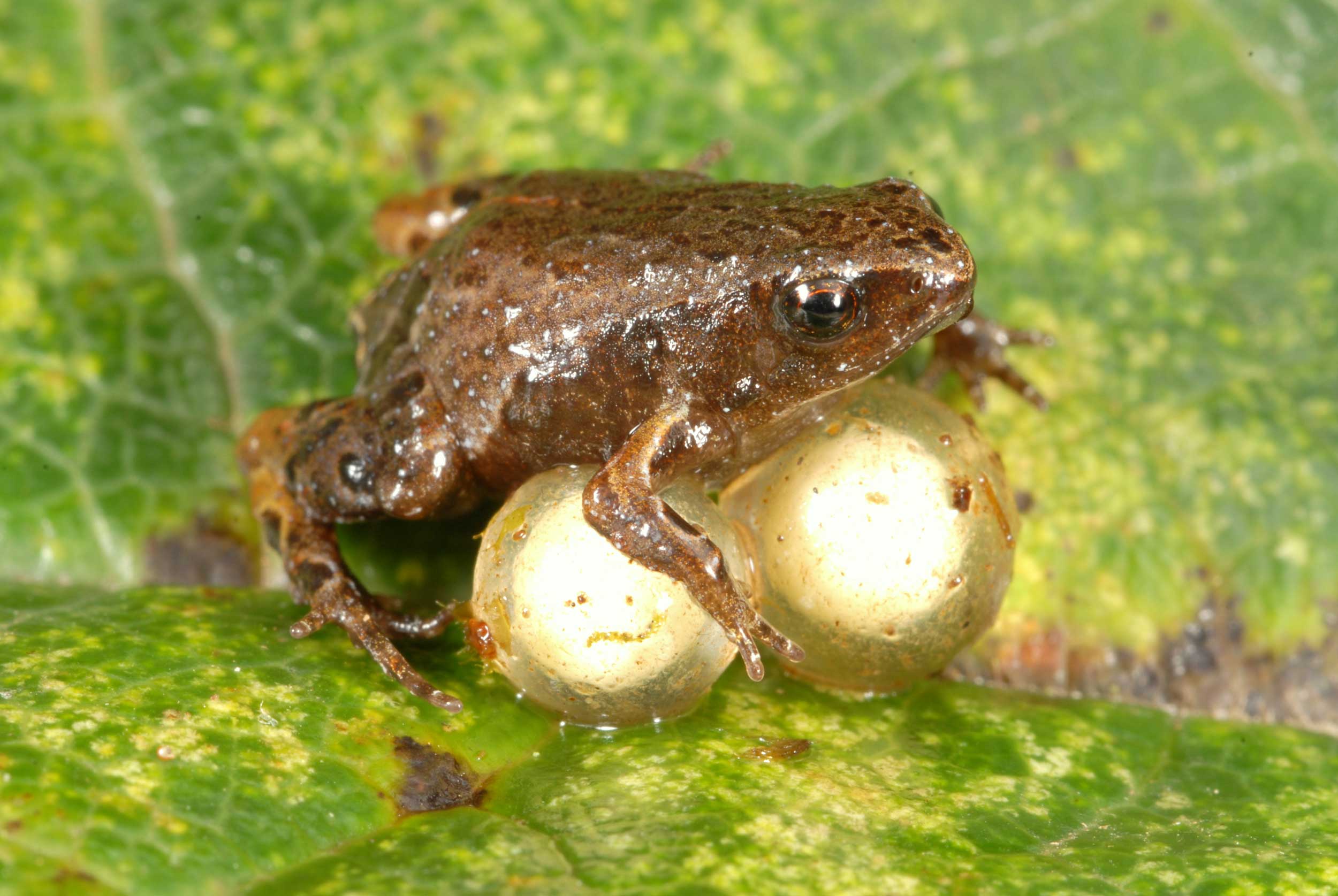 Another species included in the Peruvian frog study was Noblella pygmaea, the smallest frog of the Andes, seen here guarding a clutch of two eggs. These frogs are found in the leaf litter of cloud forest and elfin forest at elevations between 8,934 and 10,990 feet. Adults typically range in size from 0.41 to 0.56 inches (1.03 – 1.42 centimeters). Image credit: Alessandro CatenazziIn the study, the researchers looked at how closely related frog species differ in their elevational distribution and their tolerance to heat and cold in a region of the tropical Andes where temperature increase is predicted to be detrimental for most species.

“These measurements were taken in order to determine whether tropical frogs could take the heat—or cold—predicted for tropical regions as a result of climate change,” von May said.

The researchers found that the frogs’ tolerance to heat varied from 77 degrees Fahrenheit to 95 degrees and that, as expected, highland species tolerated much lower temperatures than lowland species.

When considering the temperature of the microhabitats in which the frogs live, the results suggest tropical lowland species live close to their thermal limit. Amphibians living at high elevation might be more buffered from future temperature increases because the highest temperatures they can tolerate are farther away from the maximum temperatures that they regularly experience in the wild.

Von May is the first author of the Ecology and Evolution paper, “Divergence of thermal physiological traits in terrestrial breeding frogs along a tropical elevational gradient.”