Two-legged robot walks outside at U-Michigan

ANN ARBOR—With prosthetic feet and hips that can swing sideways for stability, the University of Michigan’s newest two-legged robot has taken its first steps outside.

The machine named MARLO is the third-generation bipedal robot for Jessy Grizzle, a U-M professor of electrical engineering and computer science. While its predecessors were connected to lateral support booms and confined to the lab, MARLO can venture out into the sunlight.

If we want robots that can walk outside, over roots, stones, uneven sidewalks or steps, they need a walking gait that allows the foot to have only partial contact with the ground. Jessy Grizzle

Preparations for its stroll began just after dawn on a recent Saturday morning— early to beat the snow and the foot traffic. Researchers put on their winter coats, hats and gloves and guided MARLO through the exterior door of the lab it had been walking across inside for several weeks.

The experiments started on a sidewalk, but the walkway proved too narrow for the gantry that follows MARLO to catch it if it falls (the contraption doesn’t support the robot). So they moved to a courtyard nearby. But that was uphill, so the researchers then had to adjust the robot’s control settings. After several tries, MARLO took 15 steps.

“There were smiles all around,” said Brian Buss, a doctoral student in electrical engineering and computer science. “We were happy to see it do so well given that the control was designed and tested on a flat laboratory floor, we are using so few measuring devices at the present time, and the feet are not powered at all. There is clearly room for improvement and we look forward to the challenge.”

After two hours of testing, MARLO broke a knee, which isn’t uncommon in this line of work. The team moved inside just before the flurries started falling. 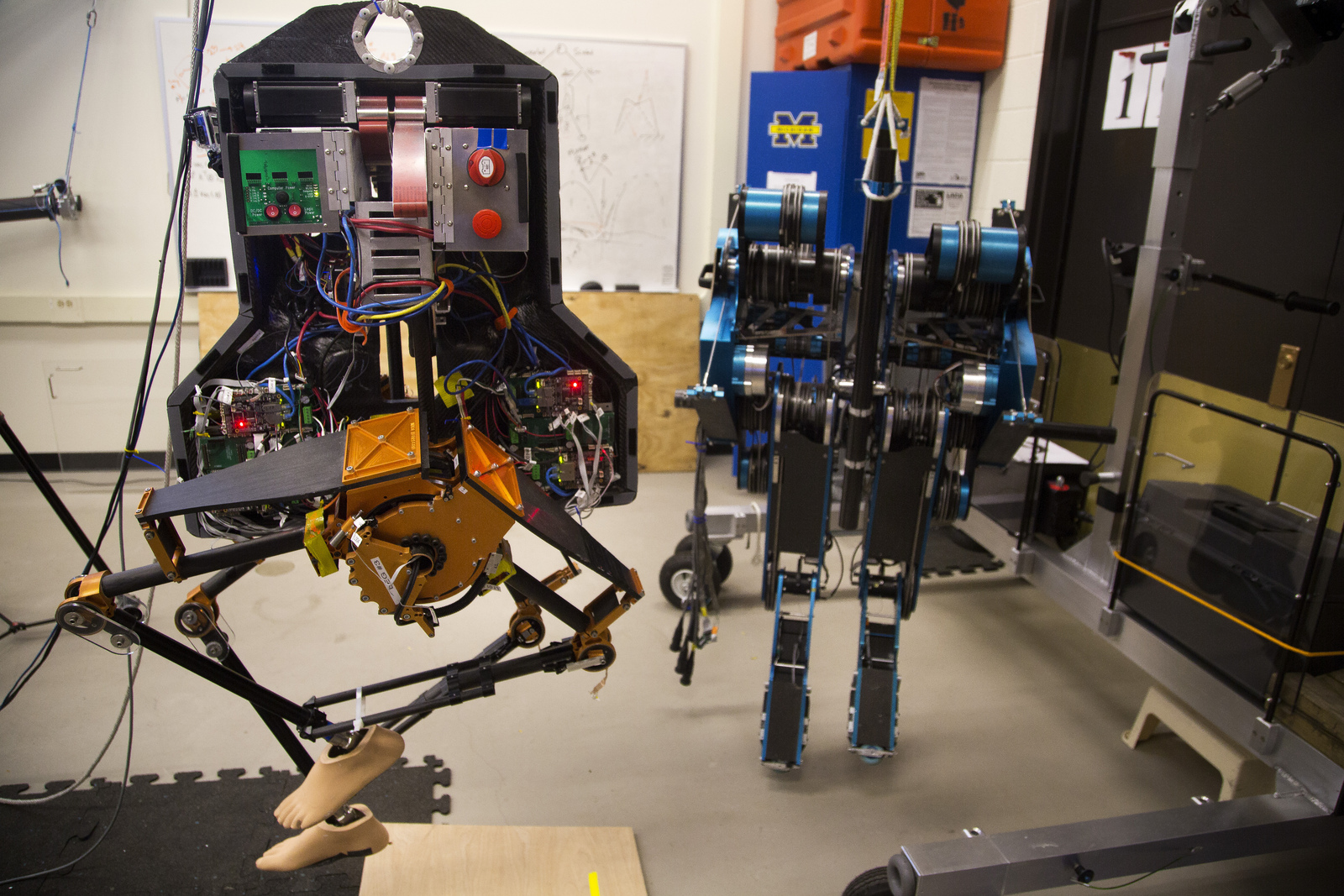 MARLO, a bipedal robot, next to its predecessor, MABEL, in a lab located in the Environmental and Water Resources Engineering Building on November 19, 2013. MARLO is the successor in EECS Professor Jessy W. Grizzle’s research group to MABEL, another bipedal robot that is being retired to be displayed in the Chicago Field Museum. Buss and members of Grizzle’s research group test the robot, making minute adjustments to improve its ability to walk in hopes of having applications in human prosthetics and the general robotics community. Image credit: Joseph Xu, Michigan Engineering Communications & MarketingMARLO adds literally a new dimension to the bipedal research Grizzle’s group has been conducting for more than a decade. The robot MABEL, retired last year, jogged at a nine-minute-mile pace to become the world’s fastest two-legged robot with knees. It was also able to maintain footing on uneven terrain and recover from tripping, among other accomplishments—but all on a circular track. MABEL was connected to a bar that prevented it from tipping over sideways.

Before MABEL was the French robot Rabbit, which was similarly mounted to a boom. Rabbit hasn’t been used for research since 2005, but in its day, it inspired a new family of gait control algorithms that allowed it to walk at a specific speed and keep its balance through surprise shoves and across changes in terrain.

“My Ph.D. students have accomplished amazing things for robots inside the lab. Now it’s time to demonstrate these feats for robots walking outdoors,” said Grizzle, the Jerry W. and Carol L. Levin Professor of Engineering.

“MABEL gave us some good hints about what can be done and how to do it. We have to take it from 2D, which refers to a planar robot attached to a boom, to 3D—no boom and no lateral support. It’s an enormous challenge, but one my team is ready to take on.”

Enabling 3D movement is crucial if the rescue robots Grizzle and his colleagues envision are ever to become reality. While wheels move well across flat surfaces, they can’t climb stairs or step over wreckage. Researchers believe that fast, two-legged machines with human-like running form could eventually travel over rough ground and inside the remains of places built for people—burning or collapsed houses, for example. 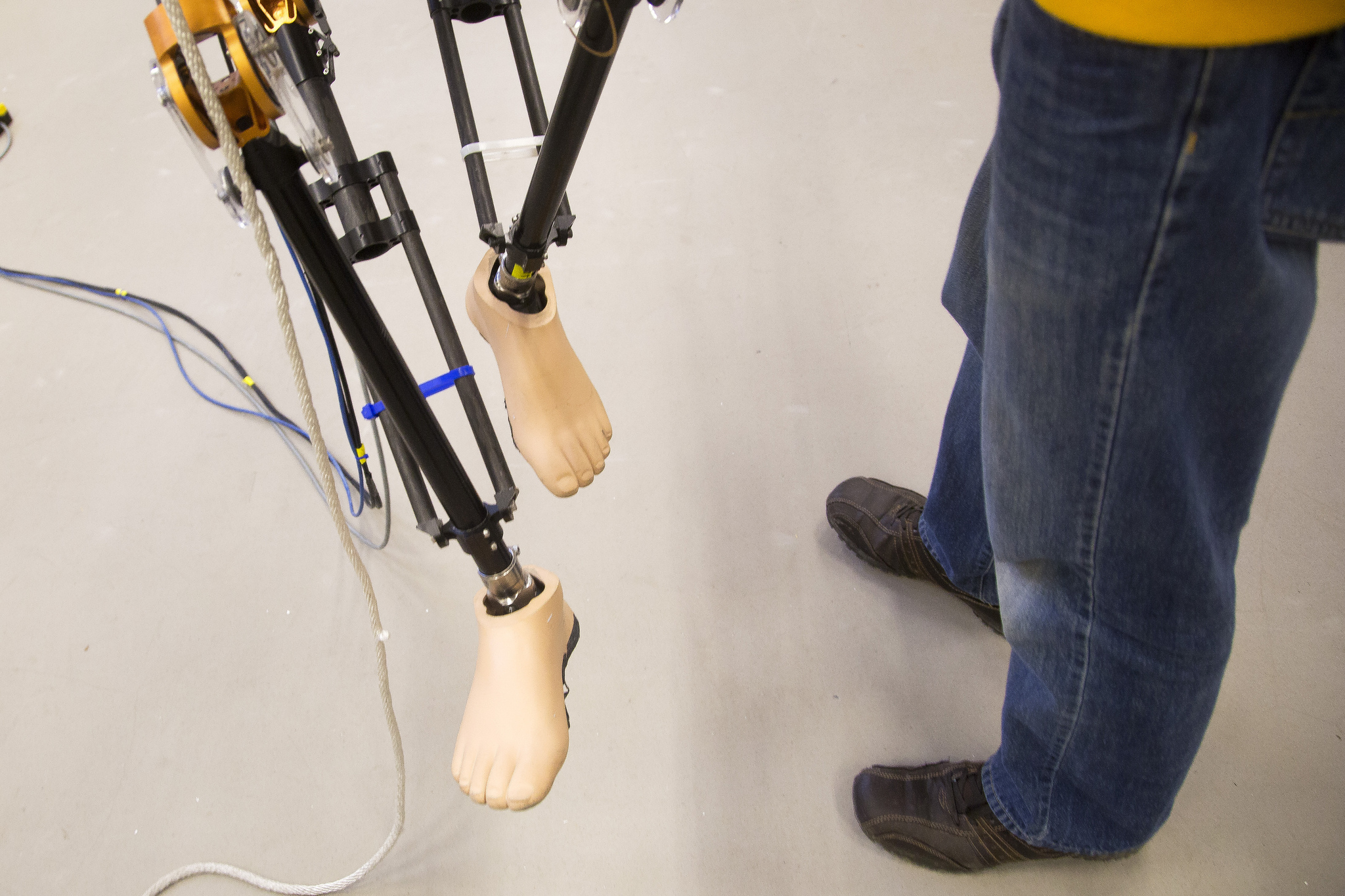 Brian Buss, Electrical Systems Engineering PhD Student, readjusts the legs of MARLO, a bipedal robot, in a lab located in the Environmental and Water Resources Engineering Building on November 19, 2013. Image credit: Joseph XuIn the shorter term, the work could lead to advanced prosthetic legs with powered, coordinated knees and ankles. Algorithms developed for Rabbit and MABEL are being adapted for this right now at the University of Texas at Dallas.

MARLO is one of three robots in the “ATRIAS” series designed by Jonathan Hurst, an assistant professor at Oregon State University and Grizzle’s long-time collaborator. ATRIAS stands for “Assume the Robot is a Sphere,” a rule that Hurst follows during design. One of the three is in Hurst’s lab, where researchers are improving its energy efficiency and designing gaits for soft as well as hard ground. The other is at Carnegie Mellon University, where Assistant Professor Hartmut Geyer’s group is focusing on running. The U-M team is working on stability outside the lab.

MARLO and its counterparts represent the second bipedal robot model in the world—and the first at a university—with a gait that isn’t flat-footed, Grizzle says. The other is Boston Dynamics’ ATLAS. In these two machines, the robots’ steps start with a heel-strike followed by a roll to the toe. This fluid action is vital for real-world stability, the researchers say.

“If we want robots that can walk outside, over roots, stones, uneven sidewalks or steps, they need a walking gait that allows the foot to have only partial contact with the ground,” Grizzle said.

Over the coming year, Grizzle says the MARLO will become a fixture on U-M’s campus.

MARLO is funded by the National Science Foundation and the Defense Advanced Research Projects Agency.