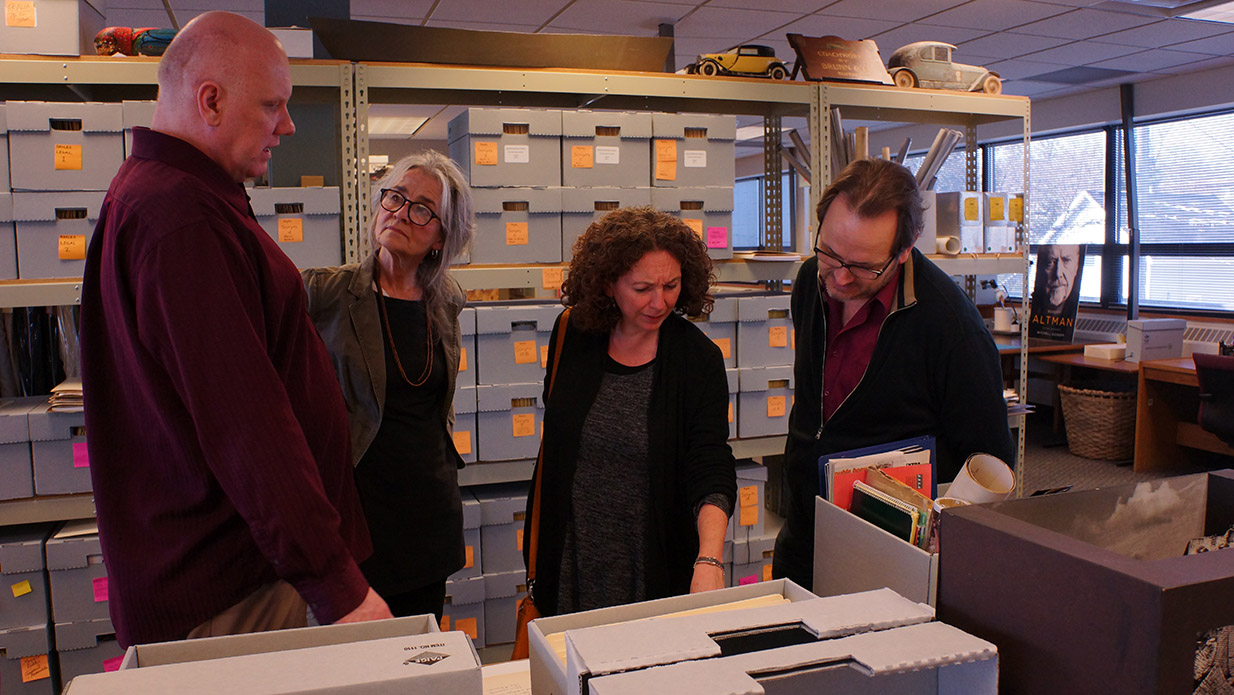 Pictured (left to right): Screen Arts Mavericks and Makers collection curator Philip Hallman, head archivist at the U-M Special Collections Library Kathleen Dow, Nancy Savoca, and Rich Guay during a recent visit to the U-M Special Collections Library, where the Screen Arts Makers & Mavericks Collection is held.ANN ARBOR—The University of Michigan Library will welcome the papers of another veteran filmmaker to their growing archive of material that highlights visionaries in the genre of independent film.

Nancy Savoca has announced that she will donate her personal collection that spans more than 25 years as a director, producer and screenwriter to the U-M Screen Arts Mavericks & Makers collection.

Savoca will be the first female maverick to join the popular collection that comprises the papers of five other indie greats including Orson Welles, Robert Altman, Alan Rudolph, John Sayles, and most recently, Ira Deutchman.

“This archive is based on a model that benefits our students and faculty tremendously,” said James Hilton, U-M dean of libraries. “Many of the filmmakers like Nancy that are part of this collection are still very active in the field, and are committed to an ongoing partnership with U-M that includes teaching and influencing curricula relative to their own historical material and personal experiences.”

Savoca, who has worked with her husband and filmmaking partner Rich Guay for more than 25 years, won the grand jury prize at the inaugural 1989 Sundance Film Festival with her screenwriting and directing debut, “True Love.” The film was recently hailed as one of Entertainment Weekly’s “50 Greatest Independent Films of All-Time.”

She went on to create for both film and television, bringing a signature strong female voice to her work that explores themes of gender and ethnic identity (Savoca is the daughter of Argentine and Sicilian immigrants), civil rights, immigration and family relationships.

“I tend to create dynamic female characters, though it’s not something that I do on purpose,” Savoca said. “Everything you are influences your work, which is why it is so important that there is a diverse set of people making films and telling their stories.”

Her other credits include “Household Saints,” a drama about three generations of Italian-American women struggling to get by in post-World War II New York’s Little Italy; “If These Walls Could Talk,” a TV movie that examines the abortion issue through three stories set in different eras; and “Dirt,” a story about an illegal immigrant from El Salvador who works as a housemaid in New York City, among many others.

Savoca’s papers contain everything from photographs and notes, to drawings, budgets, research documents, drafts of screenplays, audio and video interviews, press photos, props, and even a few notebooks from her high school film class.

“Rich and I identify as teachers and researchers, which is why we decided to donate our archive to U-M,” she said. “Through this process, we’ve had some time to reflect and to realize that we do have something to contribute—we were part of a really exciting time in the history of independent film, particularly the 1990s.”

Savoca said that she and Guay have been teaching for as long as they have been making films, and are looking forward to a continued partnership with U-M that will involve hosting workshops and guest lecturing.

Philip Hallman, curator of U-M’s Screen Arts Mavericks & Makers collection, said that the material found in Savoca’s archives is “totally different than any of the other filmmakers in this collection.”

“Nancy and Rich are working within a model that students will be able to relate to,” he said. “From idea to conception, their process is more organic. They have a natural inclination to tell stories of people we don’t often get to hear from, and they’re incredibly successful in creating these stories with limited budgets, working more outside of the bigger machine that is the studio system.”

Savoca and Guay are currently shooting a documentary on Gato Barbieri, an Argentinian jazz saxophonist. They’re also working toward the filming of Ki Longfellow’s novel “The Secret Magdalene.”

Savoca and Guay will work with U-M to update and add to the collection as future projects wrap up.