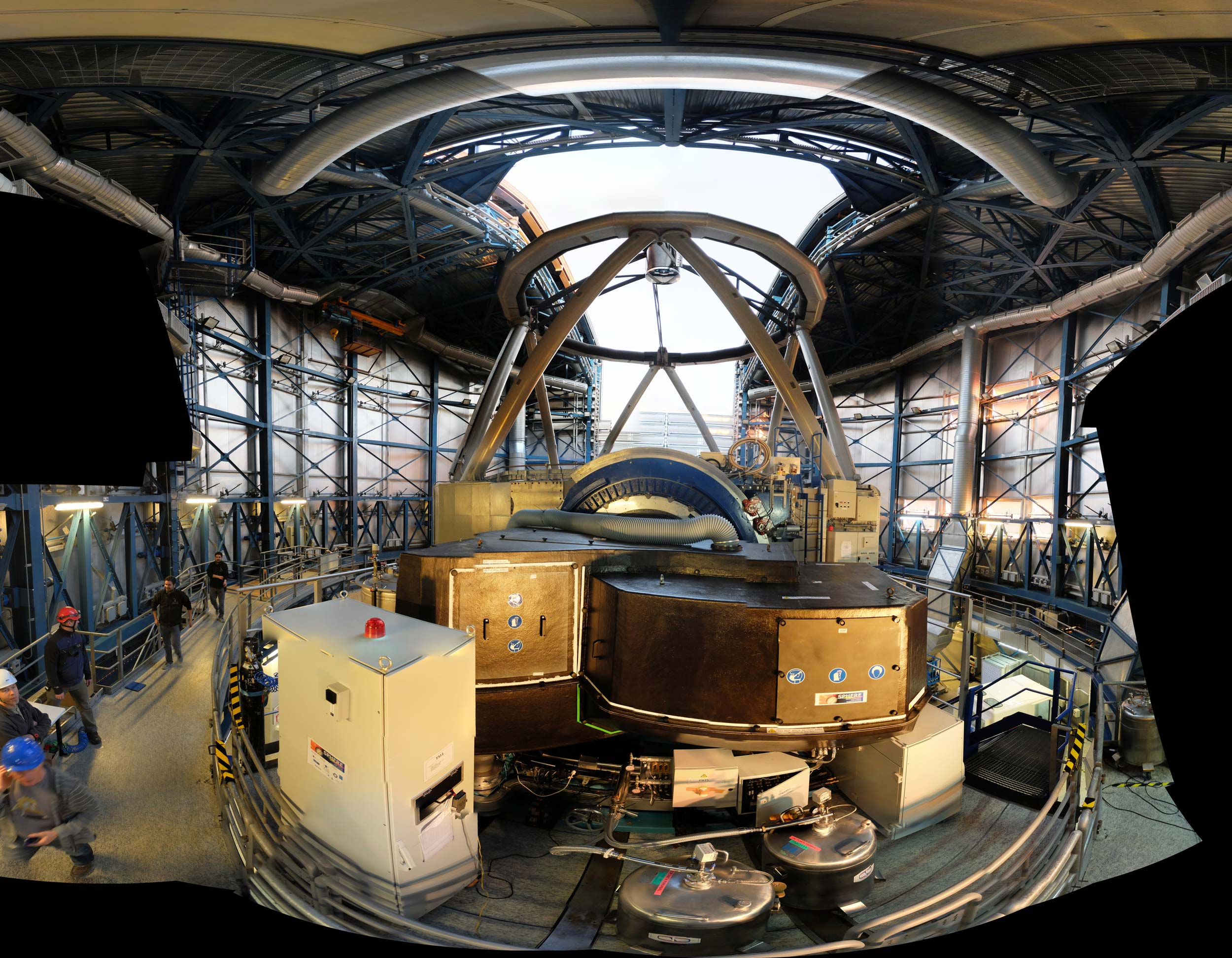 The SPHERE instrument, or SpectroPolarimetric High Contrast ExoplanetResearch, dedicated to the direct detection of planets around other stars was installed at the European Southern Observatory Very Large Telescope in Chile in the dome of one of the four 8.2-meter telescopes. Image credit: ESO/SPHERE consortiumANN ARBOR—A University of Michigan professor is part of a team that has discovered a giant, Jupiter-like planet that revolves around a star approximately 385 light years from the Sun.

The warm, dusty planet is about six to 12 times the size of Jupiter, and is one of less than a dozen planets with similar mass and orbit, according to Michael Meyer, a U-M astronomer who participated in the research.

The planet’s discovery could help scientists understand how these massive planets are formed. The study is in press at the journal Astronomy and Astrophysics.

“We don’t yet have a large enough sample to understand the demographics of these planets and only a handful of objects we can characterize to assess their individual properties,” Meyer said. “It’s only been a few years that we have been able to peer at planets tens of astronomical units from their stars.”

“It’s like trying to see a fire fly near a searchlight,” Meyer said. “It’s impossible to do in the moment, but if you use digital images, a light-blocking device called a coronagraph to help suppress the light from the star, and sophisticated algorithms, you’re able to find the fire fly.”

SPHERE also compensates for the blurring effect of the Earth’s atmosphere by using a technique called adaptive optics. Astronomers use a fraction of the light from a bright star that might have planets nearby, measure distortions in those images, and try to calculate changes to the shape of a movable mirror to try to sharpen the images collected for scientific analysis. 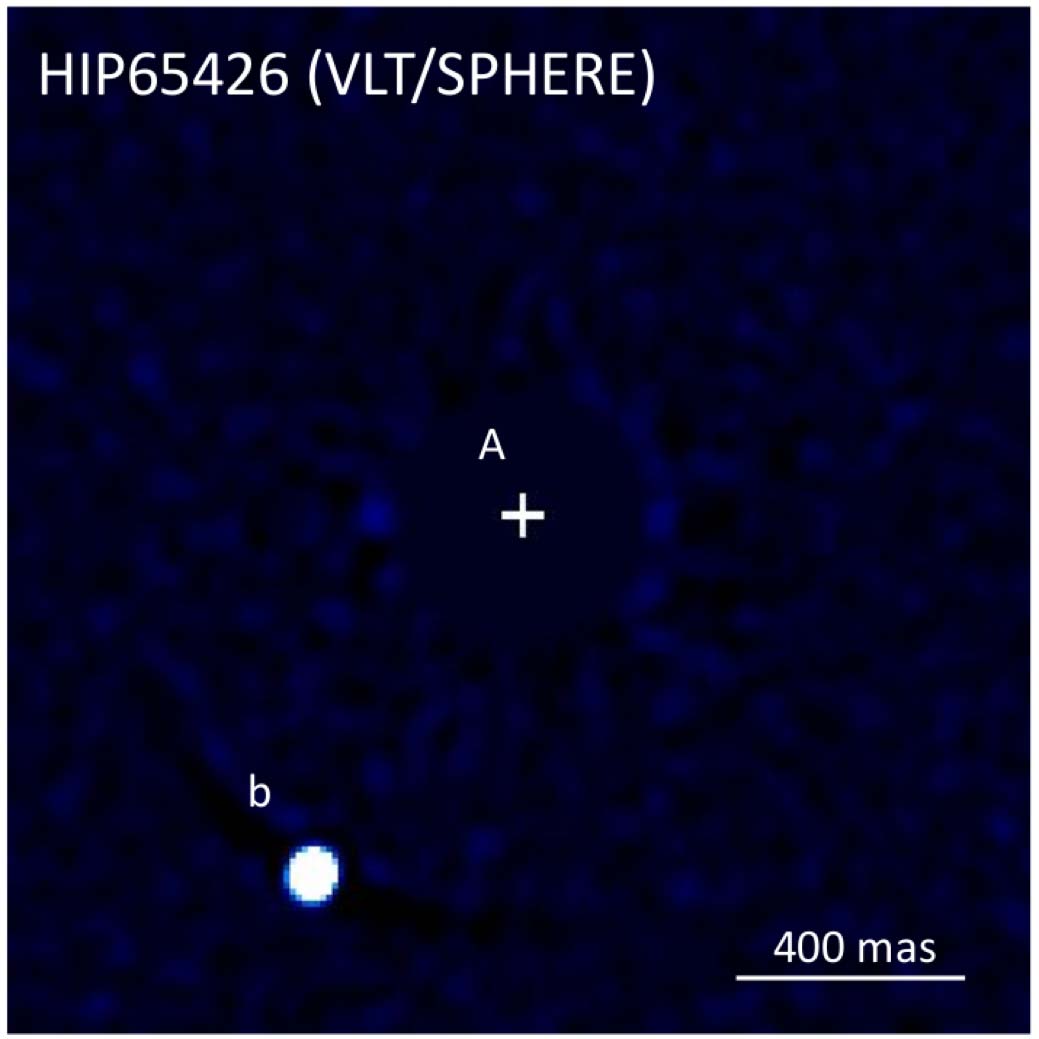 Image of the solar system produced by the Very Large Telescope and the SPHERE instrument. Image credit: ESO/SPHERE consortiumResearchers used data from the telescope to identify hundreds of potential planets—which were just as likely to be background stars and not orbiting the target stars themselves. By comparing the object in question to the expected movement of the planet co-moving with its star, the astronomers are able to identify whether the object is a planet or a distant star by chance projected near the star. To discover this Jupiter-like planet, the process took nearly a year from first observation.

“We looked at our first hundred candidates, and made a list of dozens to follow up with high priority,” Meyer said. “One by one, most were rejected as potential planets—but this one survived all the tests. We felt relief, and then elation. It was really why the instrument was conceived more than a decade ago.”

The newly imaged planet orbits a young star called HIP65426, which is about 10-20 million years old, compared to our 4.5 billion-year-old sun. Because the planet is much younger than Jupiter, it’s also much hotter, about 2,150 degrees compared to minus 234 degrees Fahrenheit. A young wide orbit planet’s heat content, derived mostly from its formation, dissipates over time as the planet cools by radiation.

The astronomers’ observations also indicated the presence of water as well as evidence of clouds, characteristics that are common among the few similar planets that have been imaged so far.

Meyer led the star and planet formation group at the Swiss Federal Institute of Science and Technology in Zurich when his work with colleague Hans Martin Schmid and the rest of the SPHERE team began. He continues the search for and characterization of gas giant planets with the Magellan Project of which the University of Michigan is a member. Future work with the next generation of extremely large telescopes, including the 24.5-meter Giant Magellan Telescope currently under construction, will enable imaging of planets perhaps as small as Earth.