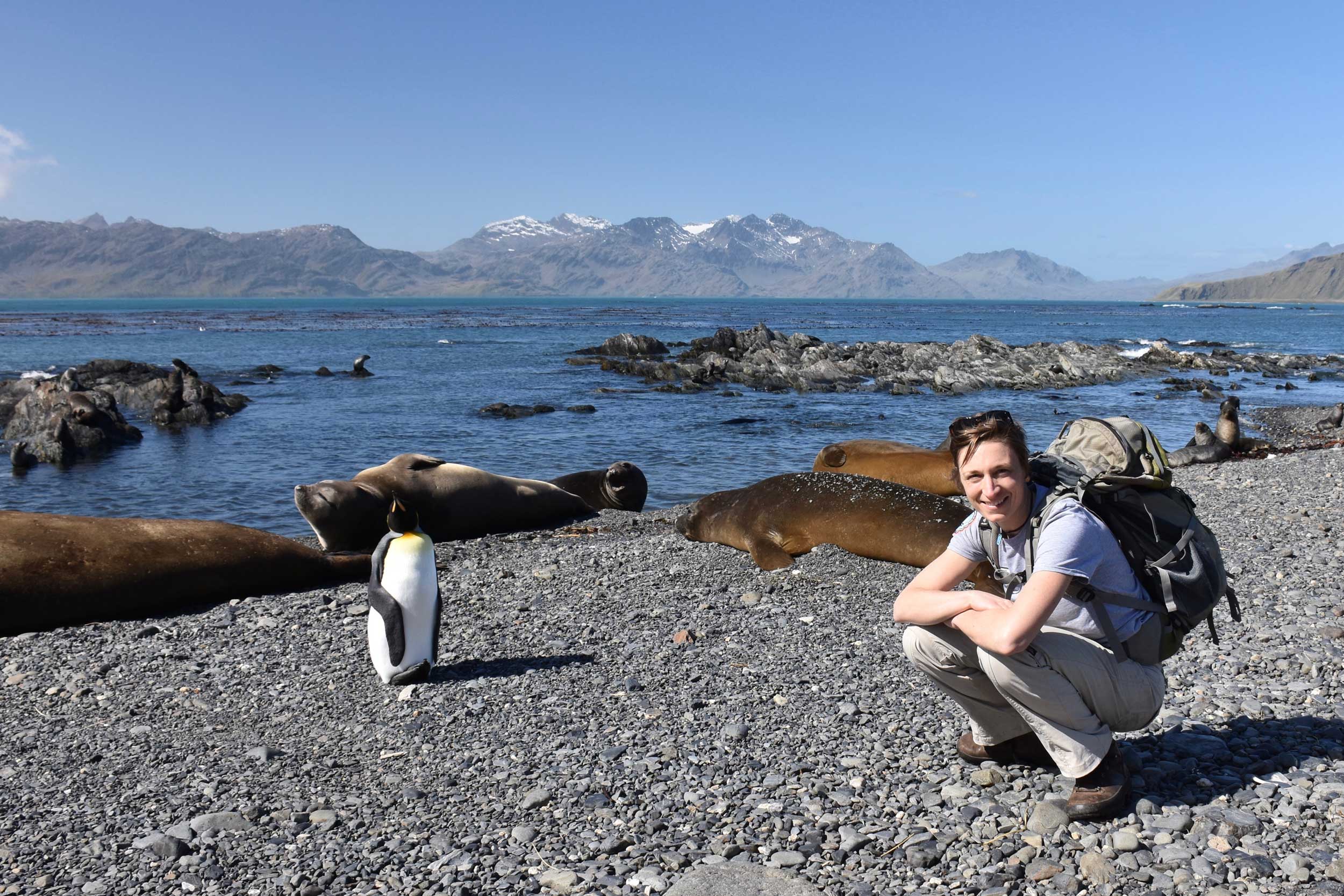 U-M microbiologist Melissa Duhaime on a beach on South Georgia Island with a king penguin and seals. Image credit: Maria TsukernikANN ARBOR—University of Michigan biologist Melissa Duhaime recently spent a month on a Russian research vessel off the coast of Antarctica, filtering bacteria, viruses and other microorganisms from thousands of gallons of seawater.

A few years ago, she sailed the South Pacific leg of a global expedition that led to a tripling in the number of genetically distinct viruses—15,222 of them in 867 genus-level groups—known to live in the world’s oceans.

And this month, Duhaime—a virologist and microbiologist and newly minted assistant professor in the Department of Ecology and Evolutionary Biology—will head out on Lake Michigan in a 65-foot schooner to teach her microbe-hunting skills to U-M undergraduates as part of a new course called “Microbes in the Wild: Environmental Microbiology Lab.”

The fall 2017 lab course is preceded by a two-week field course based at the U-M Biological Station in Pellston, just south of the Mackinac Bridge. During the two-night schooner trip on Lake Michigan, students will learn field-sampling techniques while gathering and preserving specimens they will use in research projects when the on-campus portion of the course starts next month. 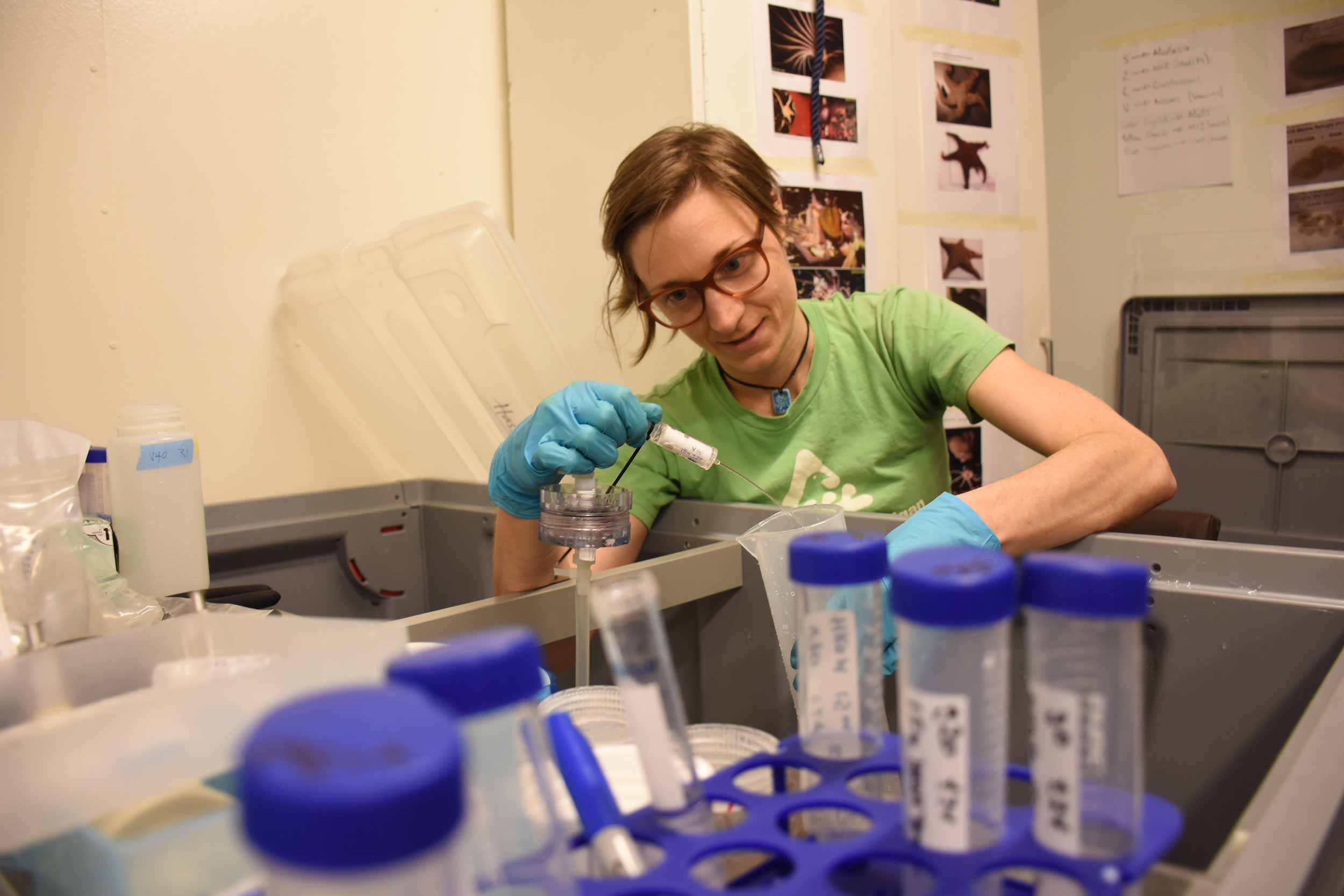 University of Michigan microbiologist Melissa Duhaime filters microbes from seawater aboard the Russian research vessel Akademik Treshnikov as the ship circumnavigates Antarctica in early 2017. The expedition was sponsored by the Swiss Polar Institute and included 22 research projects. Image credit: Mariusz PotockiDuhaime’s own research is focused on understanding the complex relationships between aquatic microbes, the viruses that infect them, and their environment. It’s an emerging field of study that highlights the pivotal role these microbes play in both elemental cycling and the global climate system.

“Before we can understand how organisms interact and the consequences of those interactions—which have implications for both planetary and human health—we need to have a handle on who is there, how they are organized into groups of similar-looking and similar-behaving organisms, and how these groups are distributed across time and space,” Duhaime said.

The search for those answers led Duhaime and Rachel Cable, a research technician in her lab, to spend time on the Russian research vessel Akademik Treshnikov earlier this year as the ship circumnavigated Antarctica on the Southern Ocean. Cable was there for the entire three-month voyage and was joined by Duhaime for about a month. 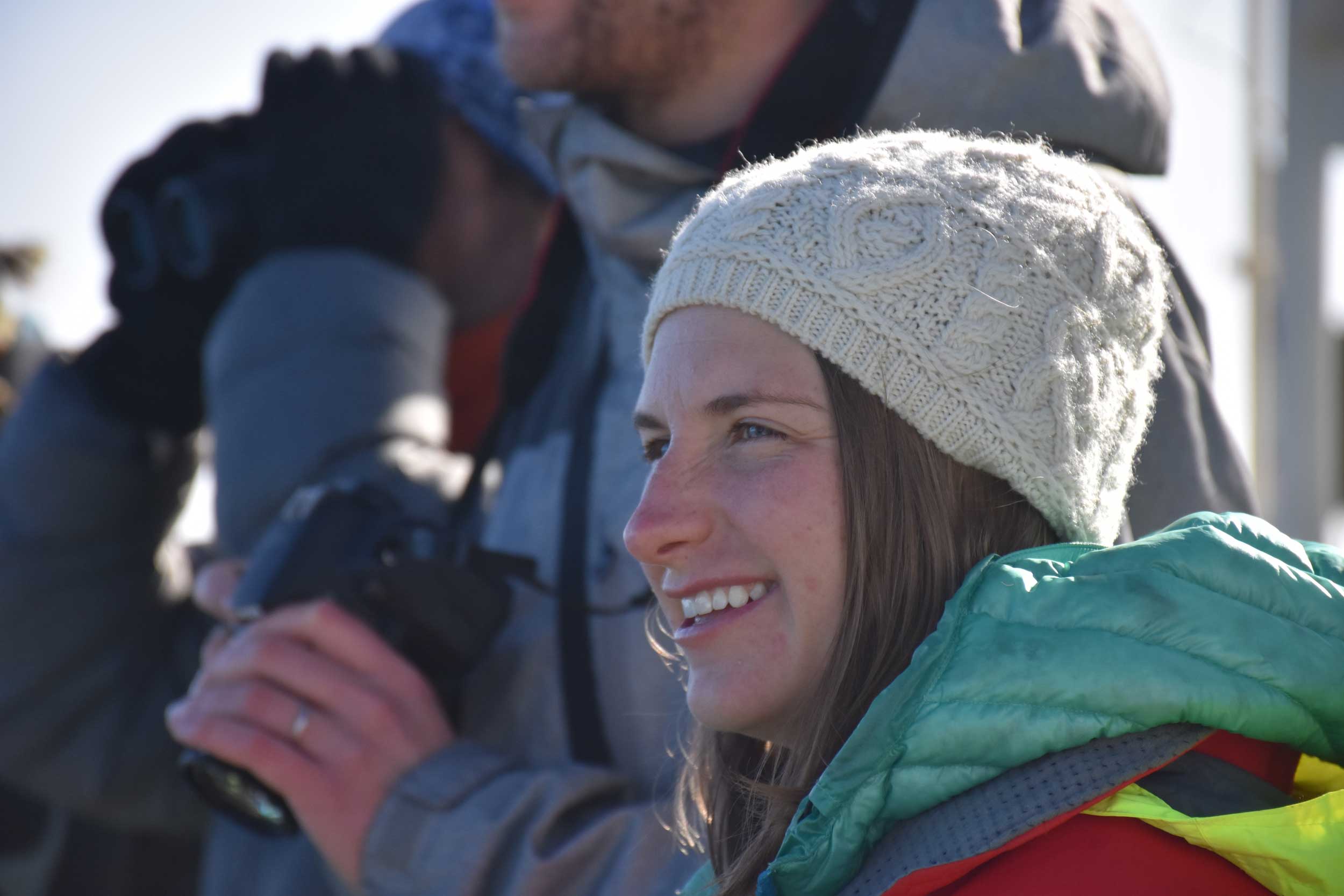 University of Michigan research technician Rachel Cable, who works in Duhaime’s laboratory, spent three months on the Russian research vessel as it circumnavigated Antarctica. The U-M researchers filtered microbes from seawater and preserved the samples for later study in Ann Arbor. DNA from those samples is now being extracted and sequenced. Image credit: Melissa DuhaimeDuhaime and Cable were part of an international scientific expedition, comprised of 55 researchers from 30 countries working on 22 research projects. The expedition was sponsored by the Swiss Polar Institute, and the studies ranged from glaciology to climatology, biology and oceanography.

The U-M duo filtered microbes from seawater—one liter typically contains roughly a billion bacteria and 10 billion viruses—and preserved the samples for later study. Back in Ann Arbor, microbial DNA is being extracted and sequenced. Marine microorganisms include bacteria, archaea and small eukaryotes, as well as the viruses that infect them.

The goal of the project is to characterize the Southern Ocean’s microbial diversity and help fill important gaps in scientists’ understanding of their distribution, ecology and contribution to biogeochemistry, including their response to climate change.

“Ocean microbes produce half the oxygen in the air we breathe and drive globally important biogeochemical cycles,” Duhaime said. “And about a third of marine microbes in surface waters are infected by viruses each day, yet we know little about those interactions and their impacts on ecosystem function.”

Understanding how marine microbes and viruses interact should lead to improved modeling of their impacts on global climate, among other things. And that’s critical, because oceans soak up vast amounts of the carbon pumped into the atmosphere by humans, influencing the rate of global warming. 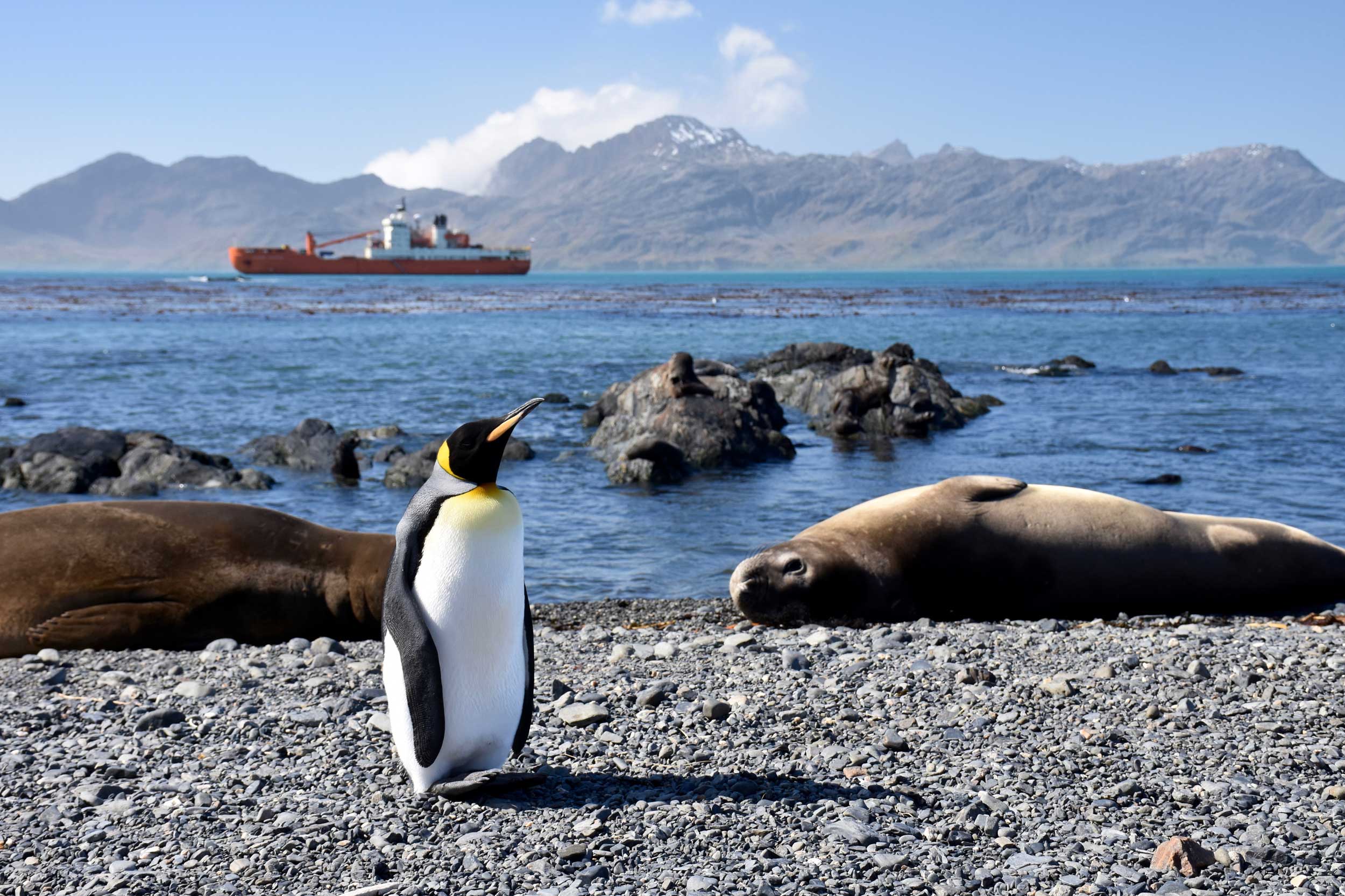 A king penguin and seals on the coast of South Georgia Island in the south Atlantic Ocean, with the Russian research vessel Akademik Treshnikov in the background. The ship spent three months circumnavigating Antarctica in early 2017. Image credit: Melissa DuhaimeThese types of research interests led Duhaime to participate in the Tara Oceans Expedition in 2011. She helped sample ocean viruses as the vessel sailed the South Pacific on a leg from continental Chile to Easter Island. That expedition led to a September 2016 paper in the journal Nature that reported the tripling of known types of ocean viruses.

Duhaime joined the Department of Ecology and Evolutionary Biology faculty as an assistant research scientist in 2012 and became an assistant professor Jan. 1, 2017.

During this month’s two-week field course at the U-M Biological Station, the group will visit Sleeping Bear Dunes National Lakeshore to help researchers there investigate bird deaths due to avian botulism, a bacterial disease.

The class will also simulate a rupture of the Enbridge Line 5 pipeline beneath the Straits of Mackinac to explore the potential of native Lake Michigan microbes to biodegrade crude oil. And the students will examine the prevalence of antibiotic-resistant microbes in the environment.