ANN ARBOR—Warning to arachnophobes and the faint of heart: This is the stuff of nightmares, so you might want to proceed with caution.

A University of Michigan-led team of biologists has documented 15 rare and disturbing predator-prey interactions in the Amazon rainforest including keep-you-up-at-night images of a dinner plate-size tarantula dragging a young opossum across the forest floor.

The photos are part of a new journal article titled “Ecological interactions between arthropods and small vertebrates in a lowland Amazon rainforest.” Arthropods are invertebrate animals with segmented bodies and jointed appendages that include insects, arachnids (spiders, scorpions, mites and ticks) and crustaceans.

The article, published online Feb. 28 in Amphibian & Reptile Conservation, details instances of arthropod predators—mostly large spiders along with a few centipedes and a giant water bug—preying on vertebrates such as frogs and tadpoles, lizards, snakes, and even a small opossum. 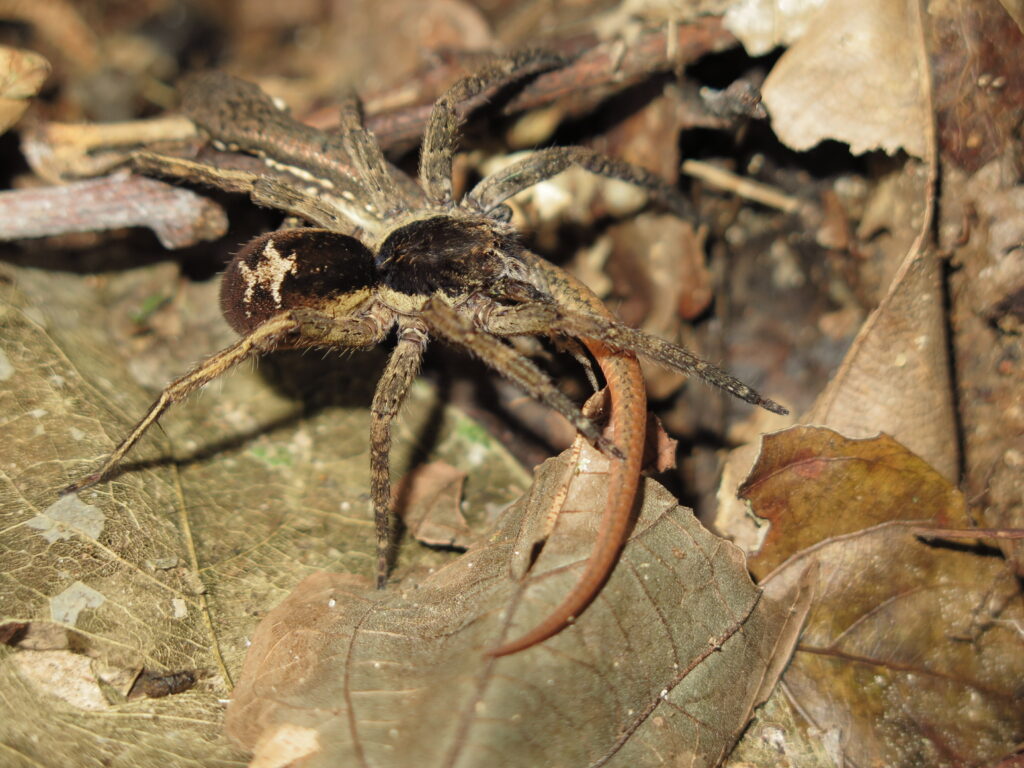 “This is an underappreciated source of mortality among vertebrates,” said University of Michigan evolutionary biologist Daniel Rabosky. “A surprising amount of death of small vertebrates in the Amazon is likely due to arthropods such as big spiders and centipedes.”

Once or twice a year, Rabosky leads a team of U-M researchers (faculty members, postdocs, graduate students and undergraduates) and international collaborators on a month-long expedition to the Los Amigos Biological Station in the remote Madre de Dios region of southeastern Peru.

“We were pretty ecstatic and shocked, and we couldn’t really believe what we were seeing, we knew we were witnessing something pretty special, but we weren’t aware that it was the first observation until after the fact.”

The study site, in lowland Amazon rainforest near the Andes foothills, is in the heart of one of the most diverse ecosystems on the planet. The team’s main research focus is the ecology of reptiles and amphibians. But over the years, the scientists have witnessed and documented numerous interactions between arthropod predators and vertebrate prey.

“We kept recording these events, and at some point we realized that we had enough observations to put them together in a paper,” said Rabosky, an associate professor in the Department of Ecology and Evolutionary Biology and an associate curator at the U-M Museum of Zoology.

Spiders are among the most diverse arthropod predators in the tropics, and previous reports of spider predation in the Amazon include prey from all major vertebrate taxonomic groups: fish, amphibians, reptiles, birds and mammals.

But knowledge of these interactions remains limited, especially given the diversity of vertebrate prey and potential arthropod predators in species-rich tropical communities. The new paper includes observations from 2008, 2012, 2016 and 2017.

“These events offer a snapshot of the many connections that shape food webs, and they provide insights into an important source of vertebrate mortality that appears to be less common outside the tropics,” said the study’s first author, Rudolf von May, a postdoctoral researcher in Rabosky’s lab.

“Where we do this research there are about 85 species of amphibians—mostly frogs and toads—and about 90 species of reptiles,” von May said. “And considering that there are hundreds of invertebrates that potentially prey upon vertebrates, the number of possible interactions between species is huge, and we are highlighting that fact in this paper,” von May said.

Nearly all of the sightings were made at night, when the arthropod predators are most active. During their night surveys, team members walk slowly through the forest with flashlights and headlamps, in single file, scanning the forest and listening intently.

During one of those night surveys, U-M doctoral candidate Michael Grundler and two other students “heard some scrabbling in the leaf litter.”

“We looked over and we saw a large tarantula on top of an opossum,” said Grundler, a co-author of the paper. “The opossum had already been grasped by the tarantula and was still struggling weakly at that point, but after about 30 seconds it stopped kicking.”

The tarantula was the size of a dinner plate, and the young mouse opossum was about the size of a softball. Grundler’s sister Maggie pulled out her cell phone and shot photos and some video.

Later, an opossum expert at the American Museum of Natural History confirmed they had captured the first documentation of a large mygalomorph spider preying on an opossum. The infraorder Mygalomorphae is a group of mostly heavy-bodied, stout-legged spiders that includes tarantulas.

“We were pretty ecstatic and shocked, and we couldn’t really believe what we were seeing,” Michael Grundler said. “We knew we were witnessing something pretty special, but we weren’t aware that it was the first observation until after the fact.” 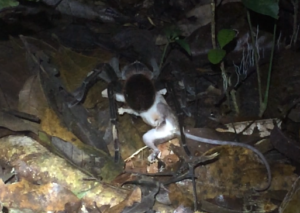 Most predaceous arthropods rely on specialized body parts and venom to capture and paralyze vertebrate prey. These adaptations include modified jaws, enlarged beaks and massive fangs. Some groups have evolved dozens of venom proteins that are injected during prey capture.

Other predator-prey interactions documented in the Amphibian & Reptile Conservation paper include:

“One of the coolest things about working in Peru is the sheer number of species that you encounter every day simply by walking in the forest,” said Larson, who studies the evolution of diet in frogs. “Every day you see something new and exciting.”

“One offshoot of the work that we’ve been doing is this collection of odd natural history events we’ve witnessed involving arthropod predators and vertebrates,” she said. “I have not reached the level of being grossed out by any of it yet. We’ll see what else Peru has to offer.”

The field research was supported by a fellowship from the David and Lucile Packard Foundation to Daniel Rabosky, as well as the Amazon Conservation Association, the Wildlife Conservation Society, the Rosemary Grant Award, the Edwin C. Hinsdale UMMZ Scholarship, and the University of Michigan.

The paper is available online at: Amphibian & Reptile Conservation